The Duffer brothers and David Harbour interview each other.

They’re the writer-directors who dreamed up the paranormal blockbuster Stranger Things. He’s the actor who brought Police Chief Jim Hopper to life as the series’ hot-tempered lawman with the wounded soul. For Queue, brothers Matt and Ross Duffer interview — and are interviewed by — powerhouse David Harbour. Naturally, they address the biggest question of all: After seeming to sacrifice himself to save the town of Hawkins, is Hopper somehow still alive?

In a wide-ranging discussion, the artistic collaborators reminisce about the show’s third season, which saw Hopper struggling to parent his supernaturally gifted adopted daughter, Eleven (Millie Bobby Brown), while wrestling with complicated feelings for Joyce Byers (Winona Ryder). They also talk some serious shop, exploring the evolution of their creative processes, getting candid about working with the show’s youthful cast, and pissing one another off in the name of art. 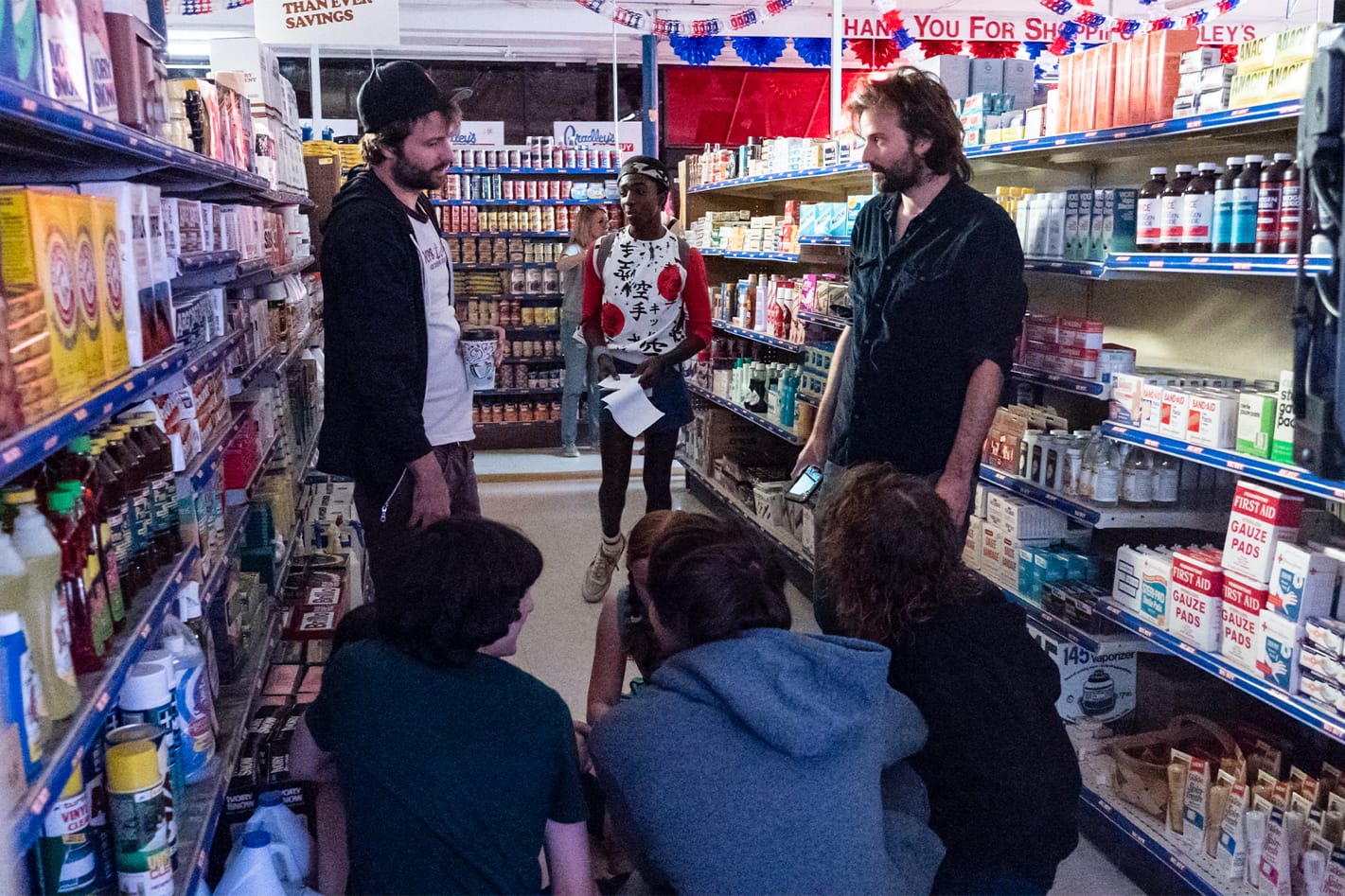 MD: One of the reasons we do love you so much — both as a person and as an actor — is that you’re always surprising us. Do you make a lot of choices beforehand in terms of how you want to play Hopper in the coming year, or do you find it as you go?
DH: I do make a lot of choices coming in. I love to prepare. I love to work in the same way, I think, as you guys do. You’ll go into the room, and you’ll be there for — who knows? Fourteen hours a day, six days a week? I don’t walk into a specific room and work, but I’m always going over things. I do have times when I’m just sitting in a chair working on stuff, in terms of creating Hopper’s mindset or his body language or his histories — what he’s dealing with that particular season. The great thing about Hopper is he is a very serious guy who’s been through some serious stuff, and he’s a tremendous cop in a certain way. He can also be a bit of a buffoon and completely lost, but you buy that that’s the same individual. I have to do a lot of work to create that, but it’s so pleasurable to inhabit someone who is so three-dimensional. MD: If you look very broadly at Season 3, your storyline was a lot funnier: Hopper had a Romancing the Stone-type journey with Winona Ryder’s character, Joyce. Do you approach comedy differently than you do drama?
DH: It’s the same sort of intention and intensity, but it’s just buffered by the fact that the circumstances around it are so ridiculous. The further you ground the performance, the more it gets comedic. I had to find these places in Hopper’s anger and in his frustration that were really real so that it could be funny.
“

Sometimes it can be the greatest gift when you’re in that moment and you think, Oh, the Duffer brothers are watching the monitor. I can feel them being proud of me.

MD: What if 20-year-old David was in Stranger Things? What would we have been in for?
DH: I don’t want to think about that kid at all. I was certainly not as composed as any of our teens. I was much more of a mess. I was too in my head. It really took until I got to my late 30s, early 40s for me to start to realize that life is not all that important, that we are just here to futz around a little bit. That mellowing with age allowed me a freedom to be able to do the things I do. RD: Does what’s going on in your life affect your performance?
DH: I try not to hold people hostage in terms of my process. If I feel like I’m really happy, and then I have to go into a really dark scene, I may have to sit in my trailer and do two hours of work trying to get into a mindset before I walk on set. Sometimes it can be the greatest gift when you’re in that moment and you think, Oh, the Duffer brothers are watching the monitor. I can feel them being proud of me. Then that smile comes out of your tears or whatever. There are all these moments and these mysterious things that happen in our art. MD: If it’s an intense scene day with Hopper, I’m like, It’s going to be an intense day with David. That’s why there are so many comedy scenes in Season 3.
DH: The funny thing is, I can piss you guys off for a day, and then we can make millions of fans see a scene in a beautiful way, in a way that I couldn’t do alone. I’m always going to sacrifice my personal life for millions of fans watching something beautiful. I will always make that choice. 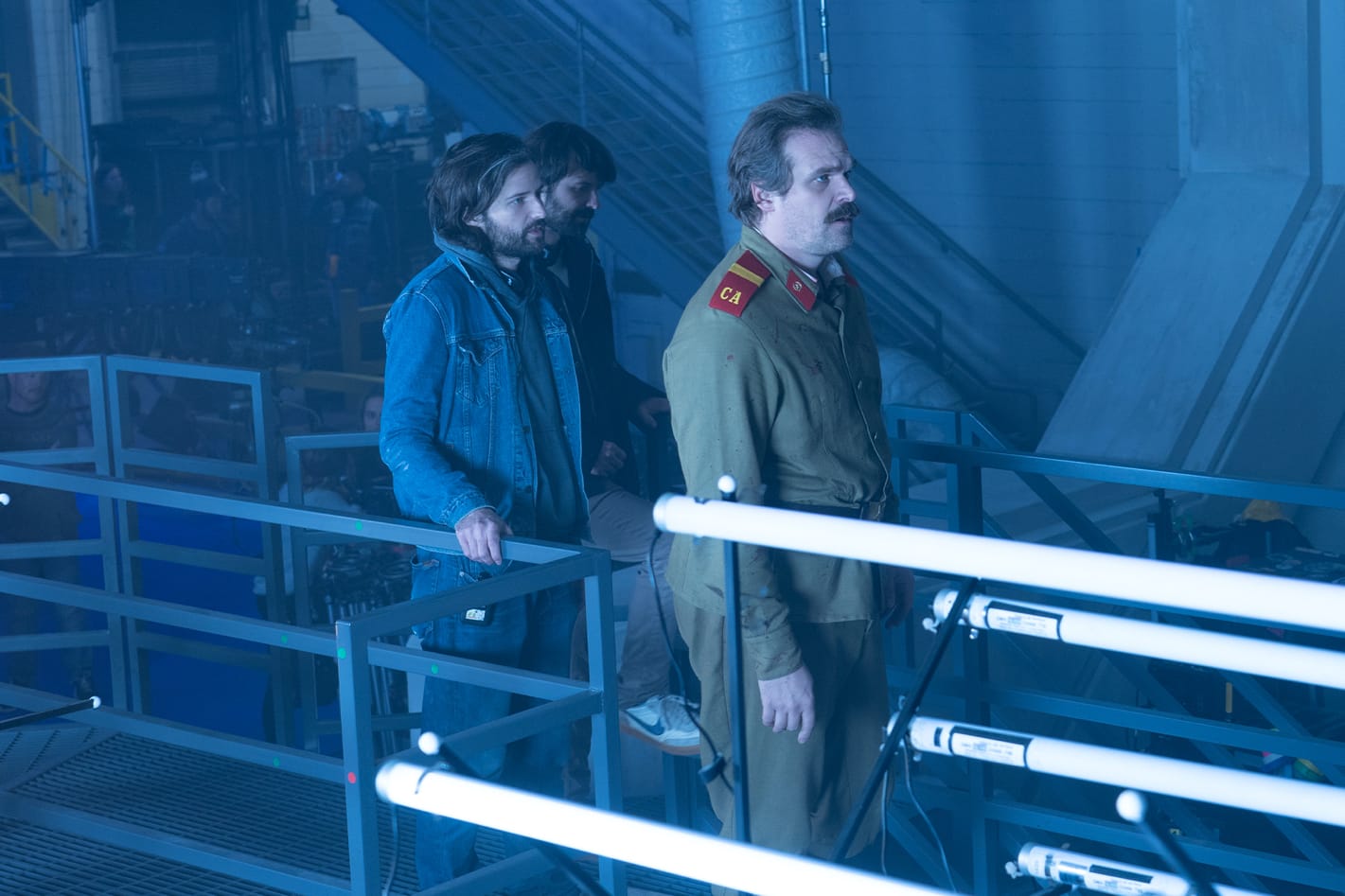 David Harbour: What do you value most in each other artistically?
Matt Duffer: Obviously, we share so many of the same skills. But still, we’re stronger in some areas than others. In the writing part of the process, Ross always keeps his foot on the gas and keeps us going. I think if it were me, we’d still be on page 30 of the first script. By the time we’re in production, we’re very much in sync. We can just make eye contact, and we know whether we got it the way we wanted it and the way we intended it.
Ross Duffer: The script is usually the battleground.
MD: Exactly, the script is the battleground.

DH: Walk me through a normal day in the Stranger Things writers’ room.
RD: What’s funny is before Stranger Things, we had never been in a writers’ room. We’ve transformed the process into something that’s very specific to Matt and me, which is starting out very broad, figuring out what the shape of that episode is and what the big beats are, talking with the writers. Then we move into Google Docs once those big beats are broken. We go storyline by storyline, and we really start to flesh it out. Everyone’s on a Google Doc, and we’re just figuring it out. We write it very messily — in a way that I don’t think anyone would understand or comprehend except those people in that room. Once all the storylines are done, we organize it and put it together in the episode. Eventually, the writers make it pretty, and then we go to script. But it starts out as this ball of nothing, and we slowly whittle it away. DH: Have you ever fought over anything having to do with the show, where one of you won and one of you definitely lost? And if so, who won?
MD: We get into little creative battles all the time. Someone is always right; someone is usually wrong. Ross hated the title Stranger Things. I remember I came up with it at night. I was like, That’s it. I came in, I did it up in the font, I took it with me to the office. I said, “Ross, I got it.” I showed it to him, and he went, “Eh.” That was a fight I won.
“

We’ve loved that the canvas of characters has grown, and that we’re able to spend time with them and really get to know them.

DH: How has your artistic worldview changed in the last 10 years?
RD: If you look back at our earlier scripts, they feel like we’re just trying to write movies. Stranger Things came to us so easily. We wrote that pilot ridiculously fast. For us, it was really going, What were we like as kids with our friends? Just the simplicity of taking something that is very much from your own life, and translating that and making it personal, not only elevated it but also made it less of a struggle. That was a big turning point. Learning that it shouldn’t be a struggle.
MD: I think any time you write something, a part of yourself is going to go into it. Now, maybe, we’re a little bit more aware of what we’re putting out there, especially because we have such a young audience. You’re like, Wow, this show has a lot of reach. Are there any positive messages that we really believe in that we can put in there? For Season 3, [introducing Maya Hawke’s character] Robin was a big idea we had early on — having a gay character that you fall in love with.

DH: What movie do you wish you had directed?
RD: My go-to favorite movie is always Jaws. It is a B-movie plot — you’ve got a killer shark — but it’s told with such sincerity, and you care so much about these characters, all of them. It changed the whole industry. I mean, come on. What a fantastic film.
MD: I have to go with a Spielberg also. Maybe E.T. It’s just a perfectly made, perfectly constructed movie. . . . We love blockbuster films. We love the spectacle, but sometimes with these big spectacle films, it feels like there’s such little time left per character. They get the crumbs, and the fights and the spectacle take up the majority of the time. I find it a little bit exhausting, especially if you look back at Jaws or something like that, where so much time is spent on characters.
RD: If we were telling Stranger Things as a two-hour movie, you’d either lose the kids, or you’d lose Hopper. You wouldn’t be able to have all of that. We’ve loved that the canvas of characters has grown, and that we’re able to spend time with them and really get to know them. But I think what we’re really excited about is that you can decide, based on whatever story it is, how long it’s going to be. You’re a little bit more like a novelist now, which is exciting. You can come up with that story, and you can write a novella. That is something that filmmakers have not really had the option to do in the past.