The twentysomethings of Stranger Things share everything weird and wonderful from Season 3.

Learning how to navigate the world as a young adult is never easy, but it’s acutely difficult when your hometown is Hawkins, Indiana. I spoke to Stranger Things stars Natalia Dyer, Charlie Heaton, Joe Keery, and newcomer Maya Hawke about the challenges their characters face in the hit show’s third season, and about their own favorite memories from set. 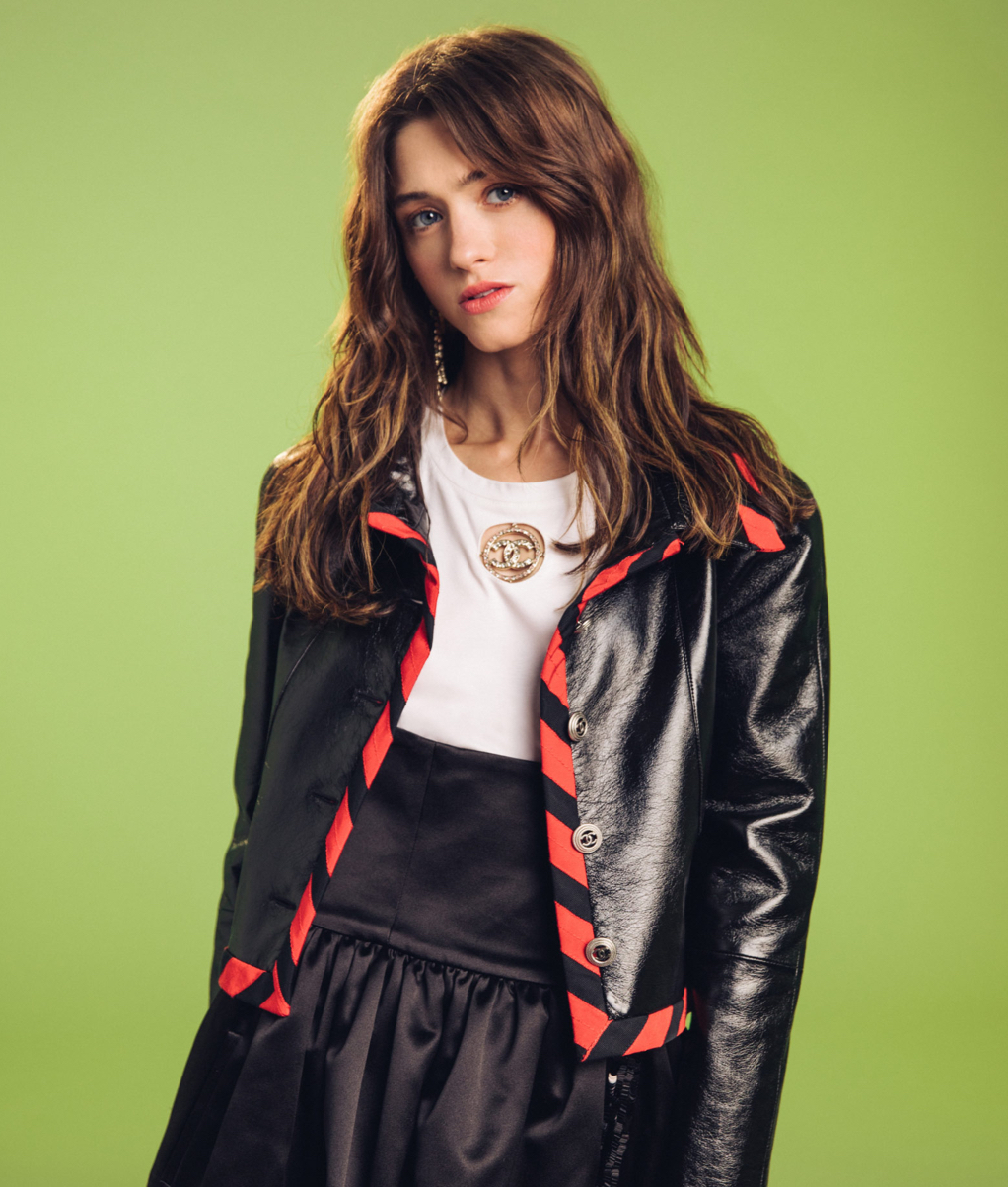 You go home, and you’re like, Wow, I really did something. I am exhausted. 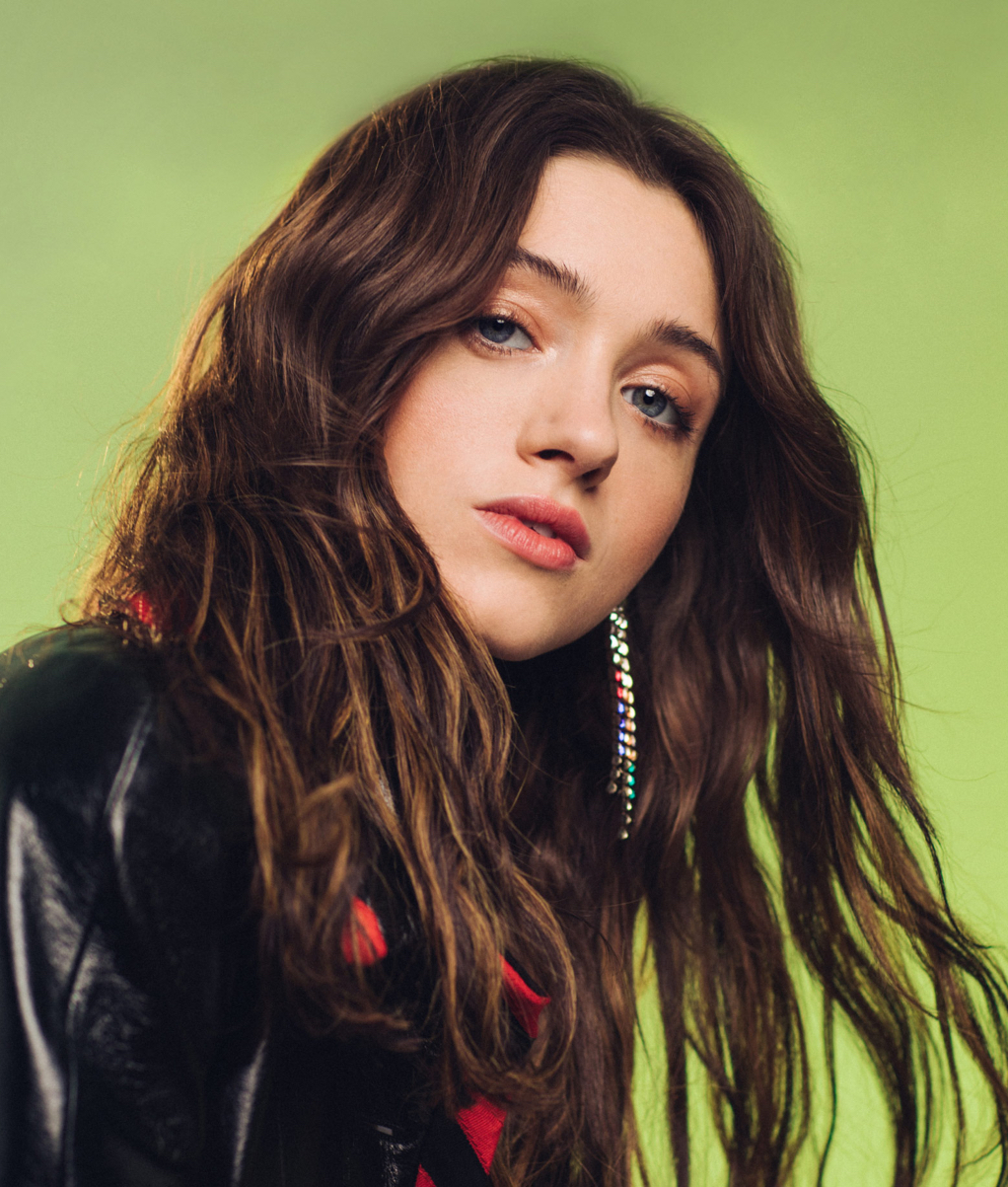 Gina McIntyre: Nancy begins the season working at The Hawkins Post, where she encounters an eye-watering amount of sexism.
Natalia Dyer: It feels like such a good thing for Nancy, who started off as this kind of pastel character and the good girl, to encounter some things that really challenge her to her core. I think Nancy’s a little headstrong about her ideas. I mean, she has to be. She’s had to fight just to get her voice out there. She’s gaining some confidence in herself every season. We also get to see Nancy and Jonathan for the first time as two people who have a relationship together, instead of just two people running around fighting monsters — although they end up running around fighting monsters pretty quickly. Nancy can’t stay away.

Speaking of monsters, what was it like to film the epic action sequence where Nancy and Jonathan fight off the Flayed at the hospital?
ND: It was such a visceral experience. The flickering lights that we were filming in for days and days and days really felt very disorienting. The days when we were shooting that sequence, it was running, it was panting, it was sweat being sprayed on you. And it was a lot of fun. You go home, and you’re like, Wow, I really did something. I am exhausted. And those shoes, I do not recommend. Personally, I might’ve just kicked them off, but they matched the outfit, so . . . With Jonathan and his family leaving Hawkins, what’s next for Nancy? Is a journalism career still in her future?
ND: I think Nancy’s lonely. With Jonathan leaving, who can she relate to? Who’s there? I mean, it’s the 80s, so it’s not like you can just hop on Skype or FaceTime. It’s a big break. It feels a little bit like the end of an era. But that instinct Nancy has, that curiosity and determination, I think it’s just part of her personality. She’s not going to forget that part of herself. I can really see that going further. 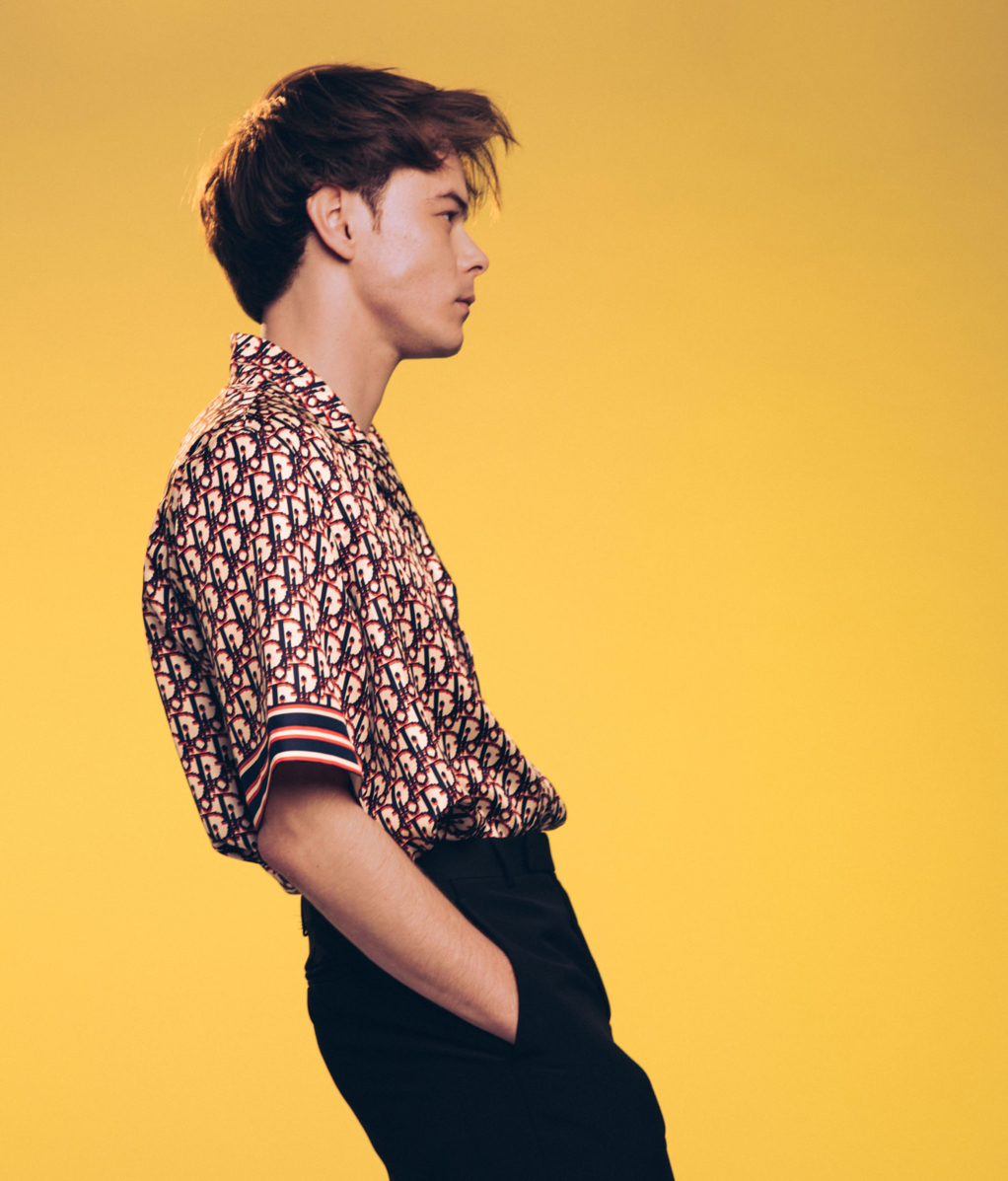 Find a girl who has some telekinesis, some superpower, and she’ll save the day every time. 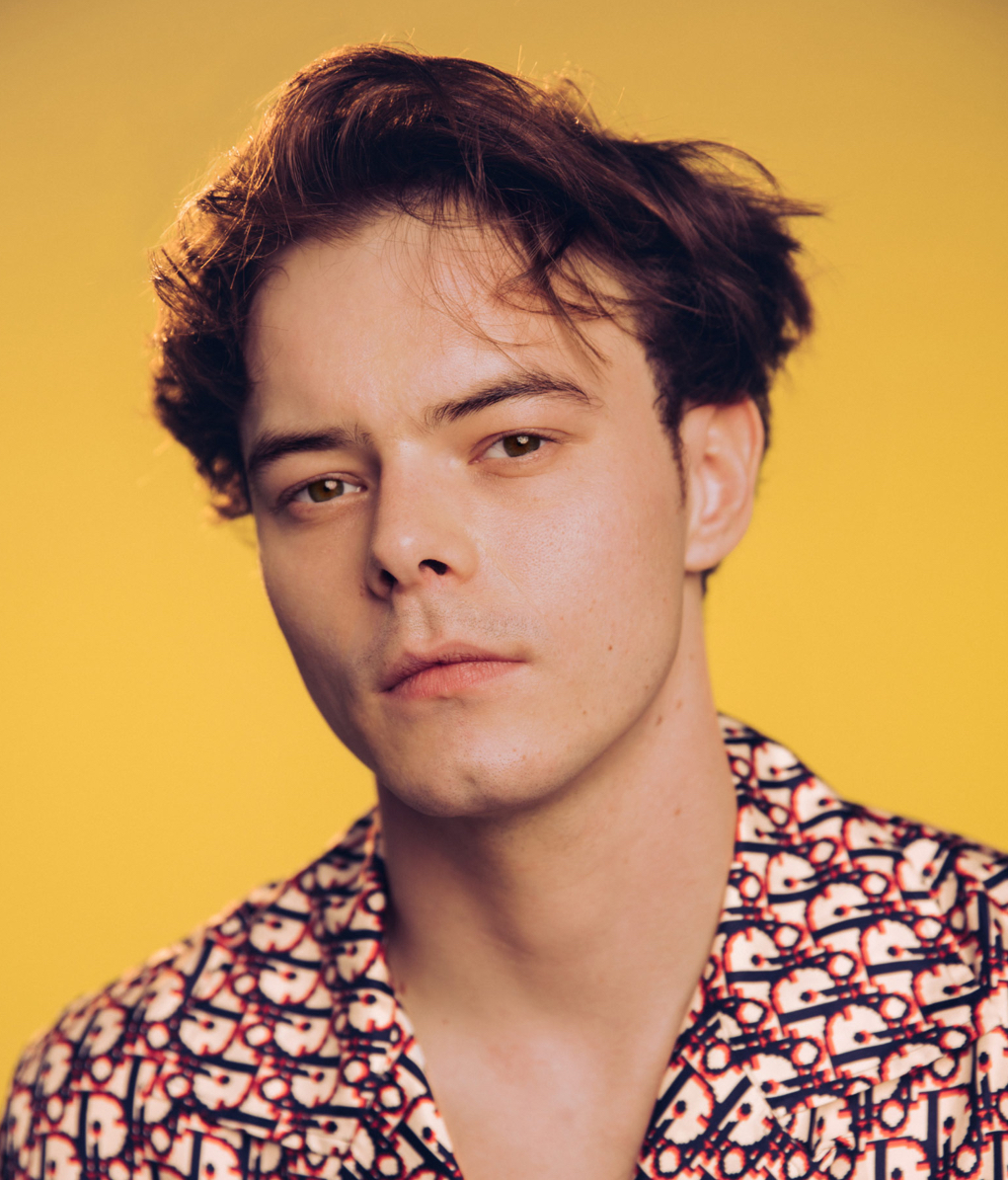 Stranger Things Season 3 was a big one for Jonathan and Nancy. How would you sum up the evolution of their relationship so far?
Charlie Heaton: Jonathan and Nancy have always been on the same team, and they both strive for the same goals. They both challenge each other as well. They can understand what the other has been through. This is the first season where you see Jonathan and Nancy in a full relationship, you see what that looks like. But they’re also in this work environment. What starts to show are their social differences. For Jonathan, this job means a lot. He’s very focused on his responsibilities, and he believes that Nancy doesn’t have to work as hard. He can’t see what she’s having to go through. They’ve always been fighting for a cause together in a high-stakes environment. You put them in a real-world scenario, and they start struggling. As the season gets more into the supernatural when they start fighting this monster, they put aside these small quarrels, and then ultimately, they fight for each other.

There are a lot of question marks when it comes to what that relationship will look like next season.
CH: There’s a distance there now, and distance is a hard thing in a relationship. For you personally, what’s it been like to be part of a series that’s had such a huge cultural impact?
CH: Sometimes you feel like you’re in the eye of the storm. When you’re in the middle of it, it’s hard to contemplate what it looks like from the outside. But the appreciation for the show worldwide has been amazing. We did a press tour this year in Italy, and the response was just incredible. The show means a lot to people. It’s really nice to be in something that resonates with all different types of people. It’s wild. You must feel like an expert at fighting monsters at this point. Any tips?
CH: Find a girl who has some telekinesis, some superpower, and she’ll save the day every time. Then you’ll be all right. 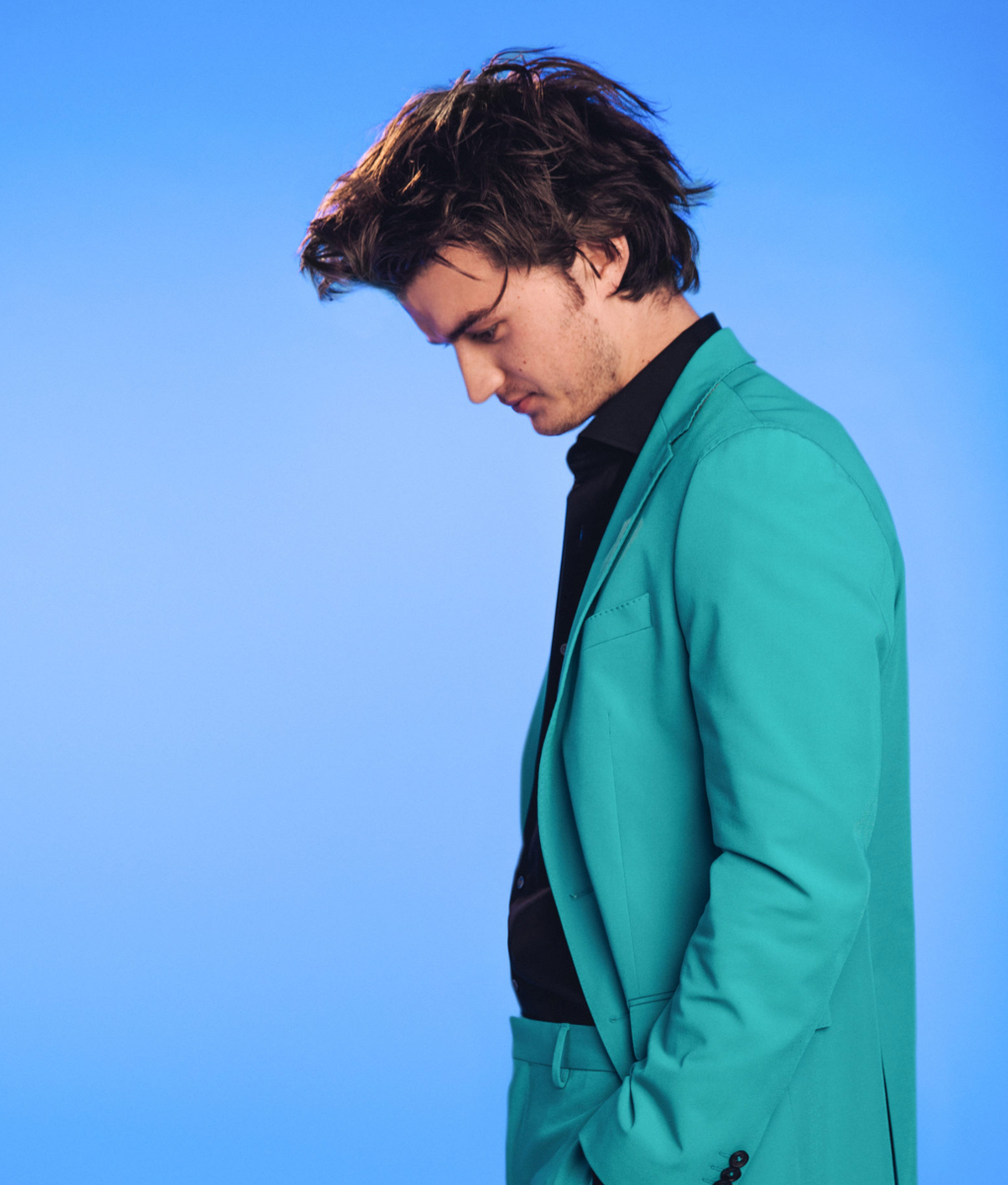 Whenever the stakes are so high, it brings an immediacy to everything that you’re doing. 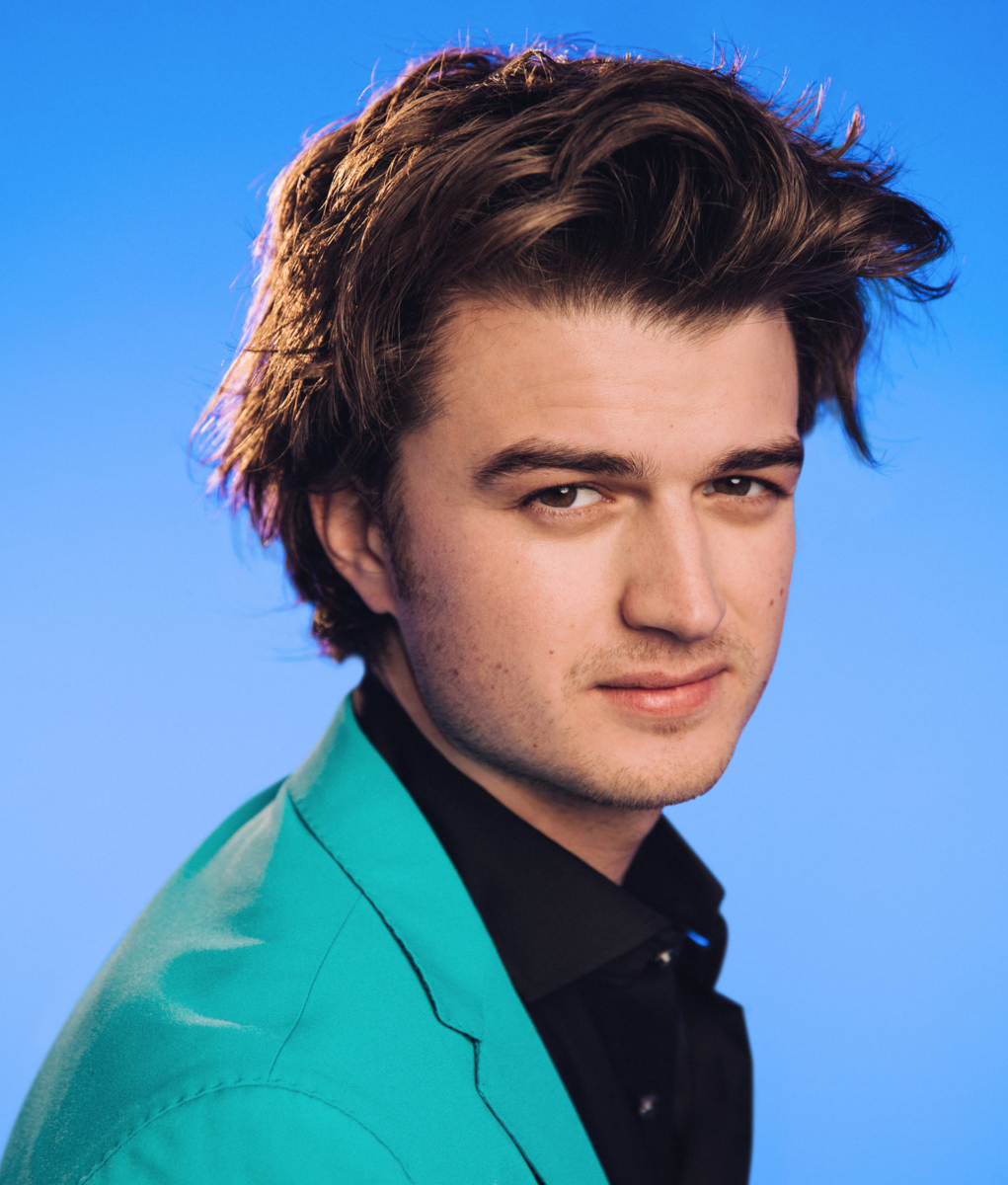 When Season 3 begins, Steve seems aimless working at the ice cream shop at the mall alongside Robin. What did you make of how their dynamic took shape?
Joe Keery: In the script, there was this natural repartee between the two characters. That was one of my favorite things to play — how that develops throughout the season. You see this almost competitive relationship turn into more of a friendship. The respect that they have for each other builds throughout the season. Even though Steve ends up having feelings for Robin toward the end, I think maybe he just feels really comfortable with her. It feels almost like a sibling relationship in some ways, where they give each other a hard time, but through thick and thin, they stick by each other.

You and Maya Hawke had the unique experience of being tied to chairs together. What was that like?
JK: You read a script and you think, Oh, that sounds fun. That will be really great to film. But when you show up on the day and you’re tied to a chair for eight hours, it can be difficult just to get in and out of the bindings. The actual mechanics of it were uncomfortable, but working through that scene was really fun. And it was a prelude to the final scene in the bathroom, which was one of the more rewarding scenes to do, and which helped the characters’ relationship come full circle. Whenever the stakes are so high, it brings an immediacy to everything that you’re doing. You’re referring to the scene where Robin comes out to Steve. Was that emotional to film?
JK: I don’t know about emotional. It was rewarding to get to that final sequence in the midst of all this crazy supernatural shit that’s going on — to do a scene that felt real and pretty honest. The action stuff is really fun, but it’s always nice when you get a two- or three-page scene to do in full, especially on a show with so many characters. It does feel like Steve’s getting his heart broken again.
JK: He hasn’t had much luck in that department. 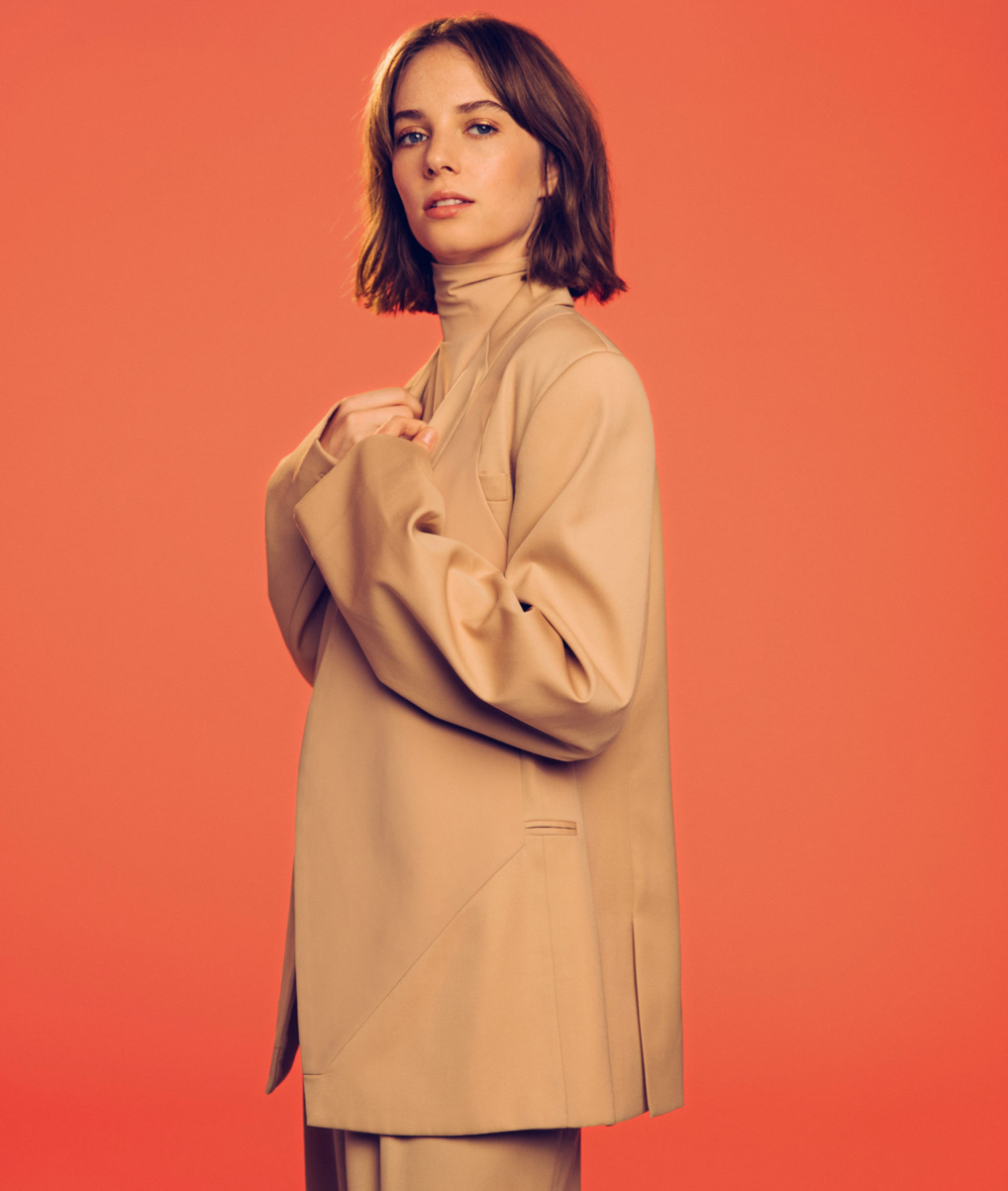 I want to make optimistic art. 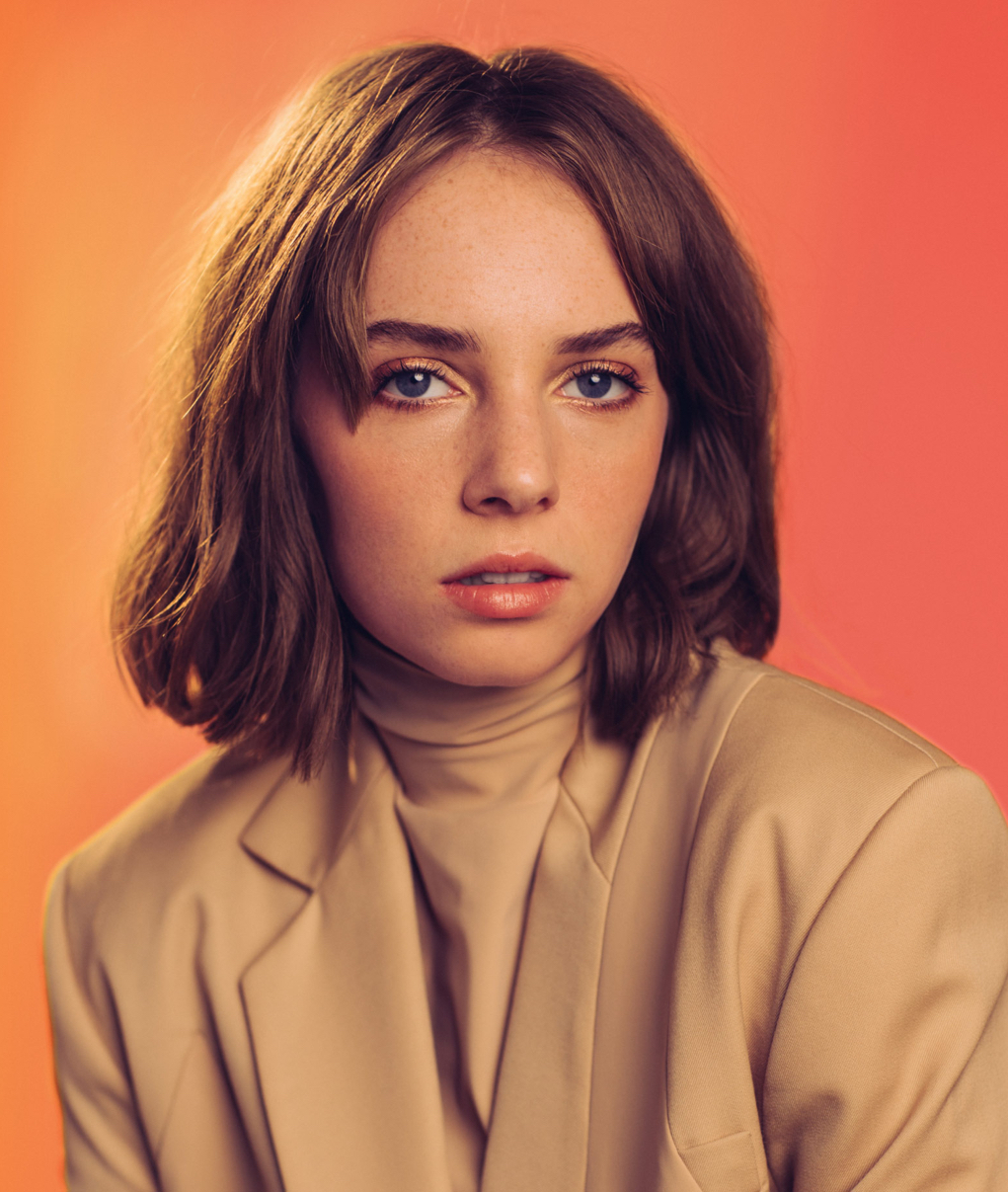 What drew you to the character of Robin?
Maya Hawke: It was the Duffer brothers as writers. It’s very rare always, but especially today, to find writers who have such a unique sense of style — where you’re really entering a world that has a tone and has a style to it. Every character is individual, every character is specific, but they all fit into this very particular world that the brothers built. The humor of their dialogue, the charm, the emotion built in, the adventure, the optimism — all of those things are really elements of the kinds of projects I want to make. I want to make optimistic art. Although these kids are always going through the most horrible and traumatic experiences in Stranger Things, it’s still optimistic art. They win, they defeat the bad guy, they kill the Demogorgon. They overcome. They feel joy, find joy. And that’s where I get the most excited.

What did it mean to you to play the show’s first L.G.B.T.Q.+ character?
MH: I was really happy about it for a simple reason. There are a lot of complicated reasons, but the simple reason was that I think it’s really amazing to show a male-female relationship form on camera that isn’t about sex. Most of the time, that’s an undercurrent in one direction or another, and for Steve and Robin, it really isn’t. Even if Steve thinks it is for a little while, or it gets confused, as soon as it’s taken off the table for him, he’s equally invested in the friendship. He reacts so unbelievably well, and their friendship gets deeper. That was really important to me because that, also, was unique — not just being the first L.G.B.T.Q.+ character, but having one of the few aromantic friendships between a man and a woman on mainstream TV. It’s really cool to me. Was it gratifying to see Robin become such a fan favorite after the third season debuted?
MH: I mean, gratifying is a funny word. It was definitely a relief. I was so nervous. Whenever you enter a big show like that, where the characters are so beloved and any new presence can sometimes seem like a threat, it’s always a risk. I am a big fan of a lot of TV shows, and whenever they bring in new characters, I’m almost like, Are you going to ruin it? Are we going to spend too much time with you? So I was really concerned about fans having that reaction to Robin. I was really afraid. I’ve never been on anything with such a close eye on it and with such intense fan investment. That was really intimidating. The fans responding well to Robin was just a relief. 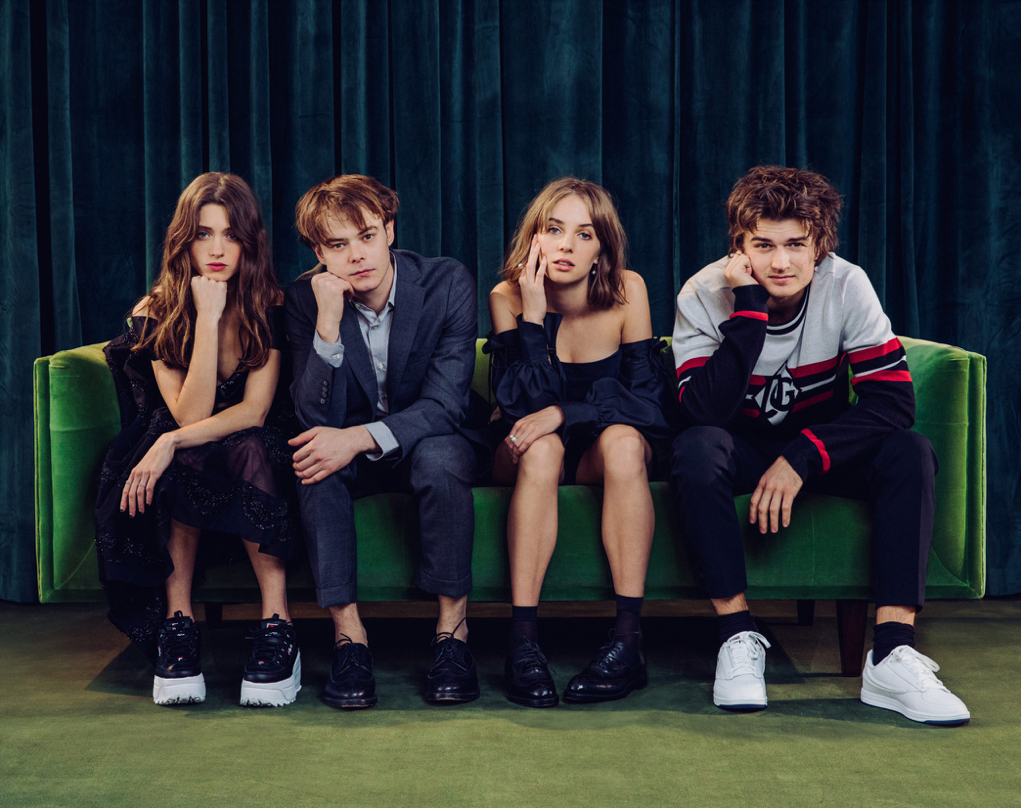