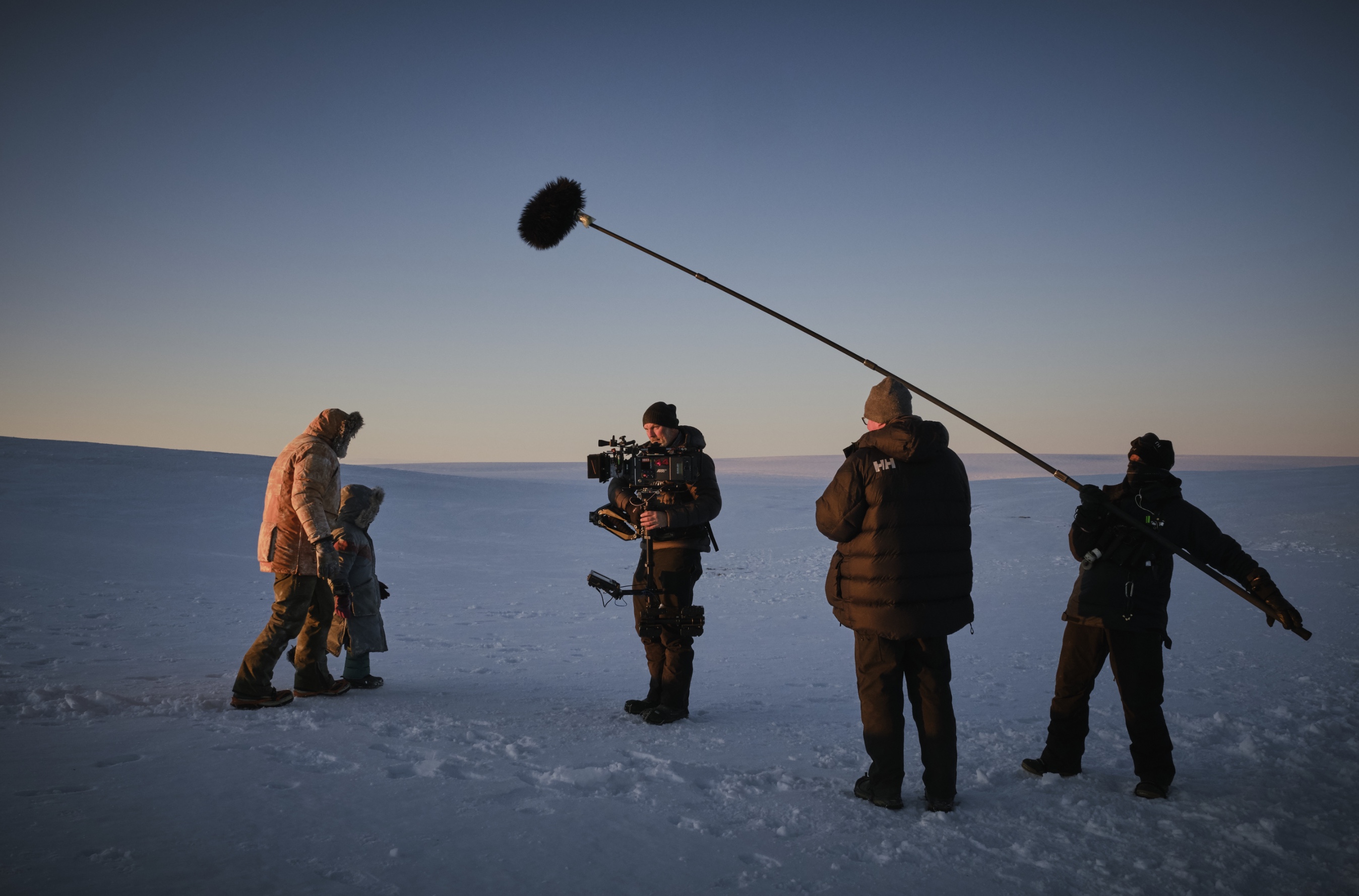 Sound World of
The Midnight Sky

Sound editor Randy Thom and composer Alexandre Desplat build an aural landscape for the end of the world.

Oscar-winning sound editor Randy Thom is no stranger to the space epic. After all, he cut his teeth on films like The Empire Strikes Back, Return of the Jedi, and The Right Stuff, and he’s worked in adjacent territory with others like Contact and Earth to Echo. When it came to George Clooney’s The Midnight Sky, about an Arctic scientist’s final quest to warn the faraway Aether spaceship about the end of the Earth, Thom’s goal was to set the film apart with a subtle nod to physics.

In space, no one can hear you scream — to steal a tagline. No one can hear anything, in fact. As Clooney and Thom set out to tell the story of The Midnight Sky, one of the movies they referenced was Alfonso Cuarón’s Gravity (in which Clooney also stars). That film’s Oscar-winning sound team really took the laws of physics to heart, willfully limiting the sounds we hear in space. Thom and his team decided not to take things quite as far. Instead, they severely muffled the sounds of, say, asteroids hitting the hull of the Aether spacecraft, or the sounds of the ship’s crew moving around and grabbing objects on the vessel’s surface. There was, of course, purpose behind the conceit.

“We were hoping the audience would get the feeling that they’re hearing the sound being transmitted literally through their bones to their ears. That does happen in real life to some degree,” Thom says. “We recorded all the sounds as we normally would in the foley and sound effects process, partly because we weren’t sure how far we would want to go down this road. But what we wound up doing was carefully processing each of those sounds differently, to give the impression that the sound is coming through the astronauts’ bodies.”
“

You can do all kinds of interesting things with the sound of ice breaking.

Space is but half the experience here. As the crew of the Aether struggles to contact home, Augustine (played by Clooney) and his silent stowaway companion, a little girl named Iris (Caoilinn Springall), weather isolation and battle the Arctic harshness. That’s where the team’s second reference point came into play: Alejandro González Iñárritu’s The Revenant.

“That was useful to me,” says Thom, whose work on The Revenant earned him an Oscar nomination. “In both cases, you have a character who’s alone for a big chunk of the film, facing big challenges in terms of staying alive in nature and in these vast landscapes.”There is a lot of wind in The Midnight Sky, and not only that, but different kinds of wind in different locales. That presented a whole other set of obstacles. Fortunately, at Thom’s fingertips were the well over 10 terabytes of files stored in Skywalker Sound’s vast sound-effects library.“We have literally thousands of recordings of wind that we’ve collected from all over the world and all sorts of situations,” he says. “We were able to design a wind score, if you will, for each location that we’re in. Sometimes it’s a heavy, bass-filled, buffeting wind. Sometimes it’s a high, wispy sound. Sometimes you’re hearing the wind blow through the wires outside of the observatory. It was one of the fun parts of this movie, designing all of that wind.”

With the Earth’s specific doom kept a mystery, the audience’s ears are ever searching for clues as to what happened. Take one of the early instances in which Augustine sets foot outside of his Arctic outpost. First we hear a billowing wind, then that gives way to a series of odd squawks until Augustine’s flashlight finally finds the source of the sound: birds struggling in the snow, presumably dying from some kind of fallout.

“I just tried to make the birds sound as sick as I could,” Thom says of the scene. “One thing I discovered was if I added a slightly liquid sound to those flaps, it made the birds feel sicker. I discovered that accidentally, by putting this watery sound in there — I thought it was a different sound. I listened to it and thought, Wow, that’s kind of an interesting take on it, and luckily George liked it too.”Thom came aboard The Midnight Sky late in the game. By the time he started his work, the score was already in place, courtesy of Oscar-winning composer Alexandre Desplat. Desplat says he ended up writing far more music for the film than he anticipated. His ultimate goal was to achieve a sense of weightlessness, an unconscious link between the celestial and the Earth-bound sections of the movie, to create something akin to a mist playing just above the action.“What George offered me is the space for the music to express all the emotions that we can’t hear from the characters,” Desplat says. “Iris can’t speak, and there can’t be any dialogue exchanged between her and Augustine. And in the spaceship, as much as they are friendly to each other and there’s a very strong companionship, everything outside is out of their hands. They just have to bear what is happening to them.”Desplat made sure the orchestration was not too busy. A string orchestra does most of the heavy lifting. Sometimes piano or a solo cello is up front, and other times brass and percussion are tapped for action sequences — particularly in the adventurous places Desplat takes the music when Augustine and Iris finally leave the Arctic base and set out for another facility. Largely, though, Desplat wanted things to have a quiet, suspended quality.Much of that quality was informed by the earliest motif that wafted his way. It’s a theme that’s central to the character of Iris, and it first begins to blossom when she and Augustine bond as they look up at the stars. From there, it goes on to serve as a connective tissue throughout the score.

“There’s this vacuity,” Desplat says. “There are only two people left on Earth, and there is the void outside the spaceship, and that weightlessness. All of these elements are integrated in what I wrote, the chord changes, the orchestration. The music is rather transparent in terms of orchestration. I think it’s emotional, but it’s not trying to be sentimental or heavy.”

Thom’s and Desplat’s efforts really dovetail in perhaps the biggest set-piece of the entire film. After taking shelter in an abandoned trailer on the tundra for an evening, Augustine and Iris suddenly spring awake in mortal terror. Ice cracks, and freezing water rushes forth as the trailer begins to sink into the abyss below.“I could have used the full 90-piece orchestra blasting out,” Desplat says, “but I felt I should leave room for the soundtrack and the sound design and the sound editing, and have the audience feel the stirring cry of the ice cracking. It’s mostly these high violins that give this very cold sensation.”That decision was perfect for Thom’s purposes, as it presented him with a wide array of options. Desplat’s work did affect the frequency range of his sounds, but he still had a lot of runway on which to play.

“You can do all kinds of interesting things with the sound of ice breaking,” Thom says. “Obviously in terms of magnitude, you can have tiny cracks and these huge, explosive cracks. Ice can be very musical. And even though you never really see beyond the ice that is immediately around the trailer, we wanted to convey this idea that the ice is cracking all over the place. That opened up some interesting sonic possibilities for us.”

In the end, these two titans of sound — with 26 Academy Award nominations and four wins between them — contributed overwhelmingly to the overall experience of The Midnight Sky. Whether we’re hurtling through the cosmos toward an unknown conclusion or trapped at the top of the world with ice as far as the eye can see, what we hear in the film is as crucial as what we see. It’s storytelling, plain and simple.“You usually try to simplify it as much as possible,” Thom concludes. “A lot of the creativity is figuring out what to leave out, what to focus on — what’s really important.”