The documentary filmmaker hits the road with Michelle Obama in Becoming.

In Nadia Hallgren’s Becoming, director and subject come together to craft a powerful portrait of one of the most universally beloved public figures of our time. Produced by Barack and Michelle Obama’s Higher Ground Productions, the documentary chronicles the former first lady’s national tour promoting her 2018 memoir. The trip was an opportunity for the country to reflect on Mrs. Obama’s life and work. For Hallgren, it was the opportunity of a lifetime.

The filmmaker had already established herself as a cinematographer with projects like Trouble the Water — the Oscar-nominated and Sundance Grand Jury Prize-winning documentary about Hurricane Katrina — and CNN’s We Will Rise: Michelle Obama’s Mission to Educate Girls Around the World. Despite the breadth of that experience, traveling with Mrs. Obama every day proved a perspective-shifting adventure. “I came out of this a different person,” Hallgren explains. “There were times when I wasn’t sure if I was the right person to do this, and one message that Mrs. Obama spreads to the world is that we are stronger than we think we are. That resonated with me personally. It gave me a tremendous amount of strength to be able to make this film.” Ultimately, Hallgren actualized an intimate account of the former first lady’s life that is likely to endure for decades to come. Tre’vell Anderson spoke with the filmmaker about how the documentary came to be, and about the legacy she hopes it will leave. 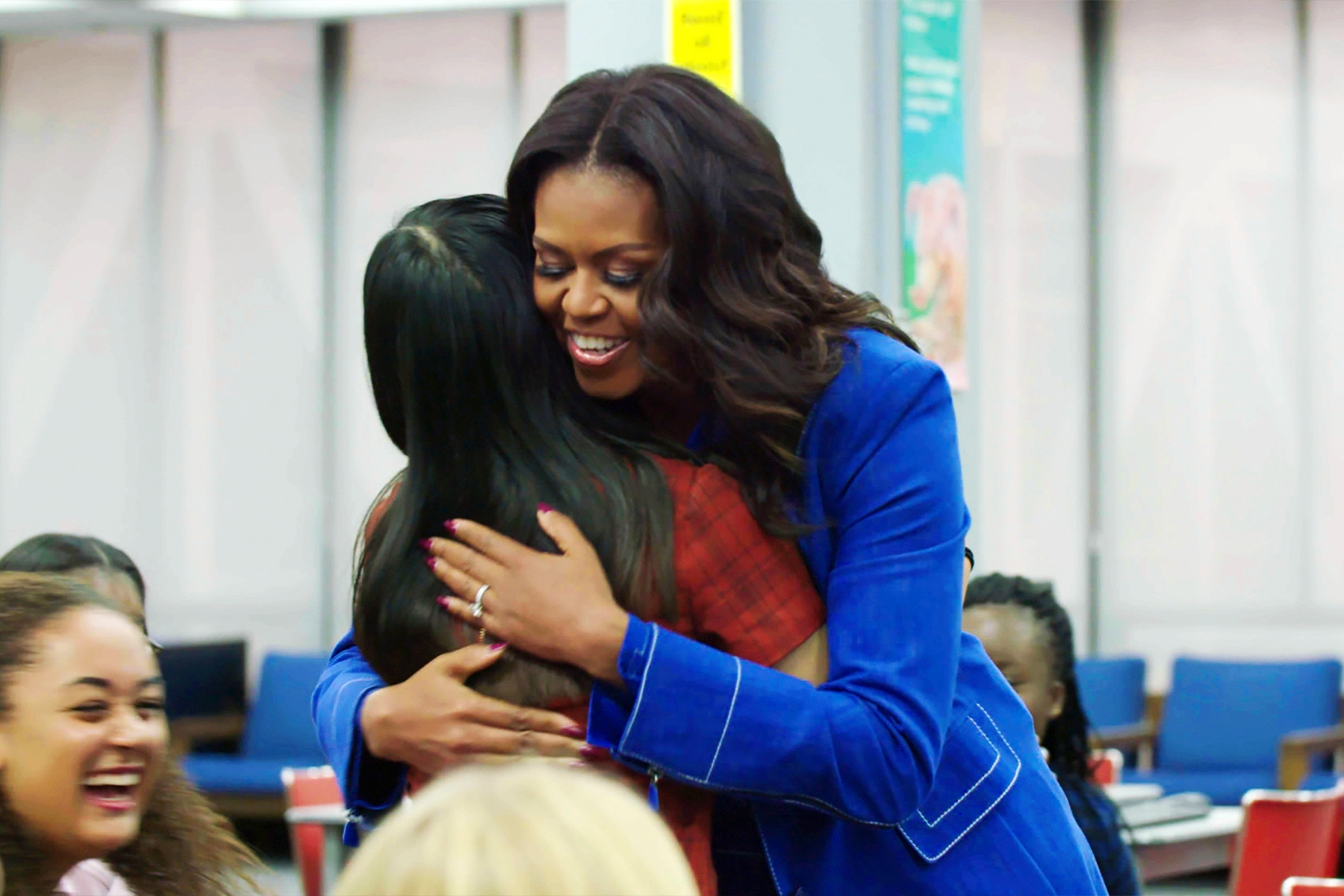 Tre’vell Anderson: How did you get this job of a lifetime?
Nadia Hallgren: I’m sitting at my kitchen table, and the phone rings. It’s Priya Swaminathan, who runs Higher Ground Productions. She says to me, “Michelle Obama is getting ready to go on this worldwide book tour, and we’re floating the idea of documenting it. We don’t know yet if it may be a film, or if the footage would be something that lives in Mrs. Obama’s archive — but is this something that you’re interested in?” I was like, “Absolutely!”

Then I get an email that says, “You have an appointment at the office of Michelle and Barack Obama.” I got really scared. How do you prepare to meet with the former first lady and figure out a way to land this job? I decided to go back and listen to every speech that I could find that Michelle Obama had done. I read every magazine feature. I read the president’s books again. I thought about what my connection point to Michelle Obama is. What is it that we can talk about? We both deeply believe in storytelling and the power of storytelling.
“

. . . I want an audience to feel the way I feel right now. I want everyone to feel like they’re riding shotgun with Michelle Obama in her motorcade.

How would you say your prior work prepared you to tell this particular story?
NH: I have spent over 15 years as a documentary cinematographer. A huge reason why I was equipped to make this film was that there is an understanding when you are rolling with Michelle Obama that things happen very quickly; there could potentially be times when a very small footprint is needed. My background as a cinematographer, as well as working on super-low-budget docs, meant that I could one-person-band it when I had to. I was able to direct; I was able to shoot and sometimes do my own sound. In looking back at some of my other work, I am really interested in identity, what makes people who they are, and what compels people to take on the things in the world that they do. Having spent a career thinking deeply about those things prepared me to direct Becoming.

Let’s talk about the actual capturing of it all. You directed it, but you also did a lot of the shooting yourself. How were you able to navigate these different spaces so easily?
NH: I had this idea that I was going to go into this film with all the fancy gear. That changed very quickly. I think within my first day filming with Mrs. Obama, I realized that this was not like any other documentary that I had ever worked on before. Mrs. Obama is flanked by Secret Service everywhere she goes. There’s no, “Can you slow down for the camera?” That meant that I had to move really fast. There were no bells and whistles in terms of the verité that I was filming — but that worked to help me get really close and intimate with Mrs. Obama. I think I went with her to about 23 out of the 34 cities that she did. I was having such an incredible experience being with her that all I kept telling myself was, I want an audience to feel the way I feel right now. I want everyone to feel like they’re riding shotgun with Michelle Obama in her motorcade. I remember when we were going to film a book signing, in my mind I was like, How interesting could that be? I go in, and there are hundreds of people waiting for her. A young woman who works with her grabs a box of tissues. She’s like, “People get emotional.” I started filming, and 10 minutes later, I come out in tears. That really surprised me. She’s just signing books and shaking hands, but there’s this special quality, this warmth to the way that she connects with people that I had never experienced before. 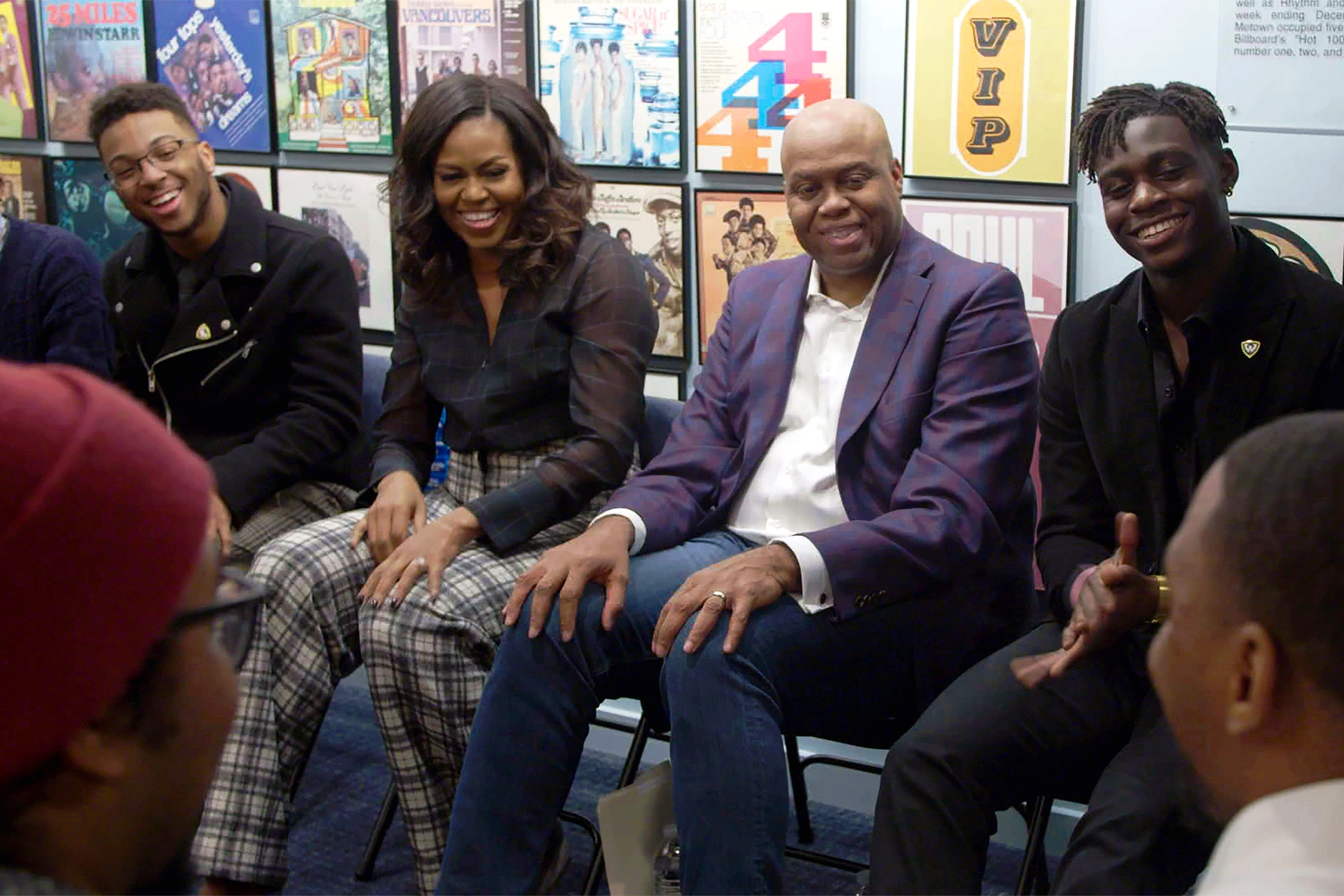 Could you describe the experience of interviewing her family members?
NH: There were times when I was laughing so hard while I was filming her and Craig, her brother, because they’re so funny. I was trying to hold the camera still so that I didn’t ruin the shot. . . . And [Michelle’s mother] Mrs. Robinson is the realest person I’ve ever met. She’s super practical. As she says, there are millions of Craigs and Michelle and Barack Obamas all over the South Side of Chicago. She does not think her kids are special. She reminds them of that. It’s this wonderful quality that she has.

Mrs. Robinson had been known not to talk to cameras while they were in the White House. She appreciated her anonymity. Over time, we developed a relationship, and I think we see the culmination of that relationship in the scene when Michelle goes back with her mother to visit her childhood home. They both go to this very emotional place, talking about Michelle’s dad and bringing up these memories of him. Mrs. Robinson is so beautifully expressive in that moment. For me, that was really special. In the editing room, sitting down with the footage, what was that experience like? Were there favorite moments that emerged?
NH: There were these stories from Mrs. Obama’s book that I knew I wanted to include in the film. One of them was the scene we called “Escaping the White House.” She tells the story of the day that she went to the Charleston funeral [for the victims of the 2015 shooting attack on the Emanuel African Methodist Episcopal Church]. That same day, she goes back home and marriage equality passes, and there’s a celebration happening outside the White House. It was such an amazing range of emotion in one day that brought me closer to understanding what her life might have been like. There’s also the scene back at her childhood home where we get this very vivid picture of how she grew up. In that house, there’s still her childhood bedroom with her doll on the bed. It’s amazing. I remember when I first walked in there, I had chills all over my body. She and President Obama lived in that house together, and it’s such a humble, modest home. There’s so much richness and history in that space. That we were able to go in there and share that, it just moved me so much. 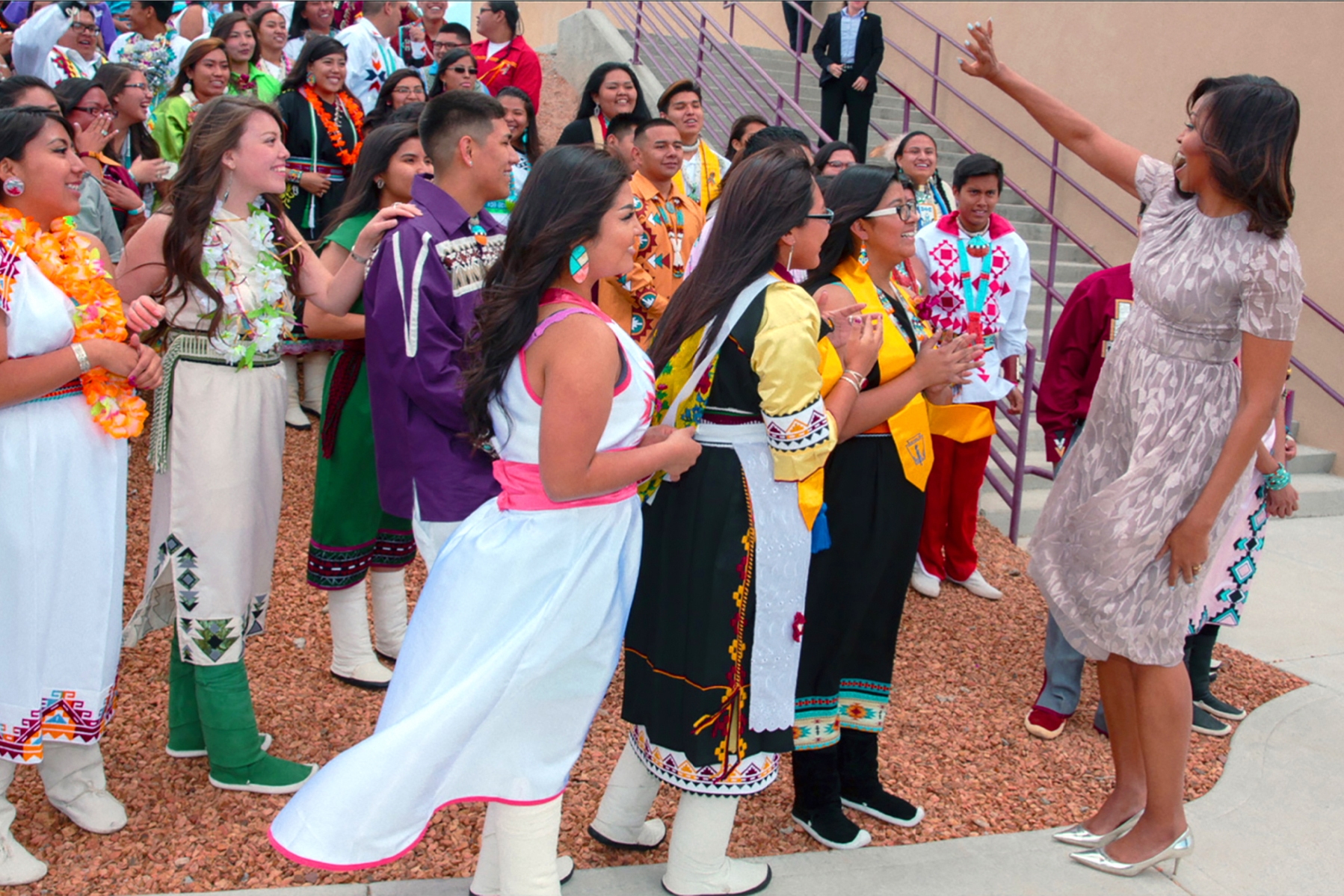 When the Obamas were elected, some people thought that we were in a post-racial society. Some of the unrest that we see in the streets right now is demonstrating that we weren’t quite there. In what ways was it important for you to incorporate that aspect of Michelle Obama’s story into the film?
NH: To this idea that we had entered a post-racial society: Many of us were having a completely different experience under the Obama administration in terms of police violence against Black folks and all the other systemic issues that we have faced as a country. I had gotten an advance copy of Mrs. Obama’s book, and I told myself, I’m going to read this book, and any time I get emotional, I’m going to highlight it — whether it’s funny, whether it makes me cry. I remember coming upon a passage where she talks about the experience that she had seeing all these young people being murdered by the police. She mentions Michael Brown and other individuals. She says, “We ourselves were a provocation.” I remember reading that line, putting the book down, and weeping. In that moment I was like, This has to be in the film because it’s the experience of all Black people in America. Whether you are on the streets of Ferguson or you are in the White House, this is what we know to be true. So in this moment, when this country is on the streets protesting and responding to more violence against Black people, understanding Mrs. Obama’s perspective is really interesting.

I’m so moved by the response that people have had to this film, people all over the world that I’ve gotten notes from . . . that see themselves in Mrs. Obama’s story.

Is there any lasting message or takeaway that you hope audiences have from the film before we go?
NH: It’s a film of the moment, but I also see it as a historical film. So, in 25 years people can watch this film and understand something different than they did. I think it also speaks differently to different people, different age ranges. I encourage people to go back and watch it again. There’s so much to learn from Mrs. Obama’s experience. I’m so moved by the response that people have had to this film, people all over the world that I’ve gotten notes from — young people in India and in Kenya and all these places — that see themselves in Mrs. Obama’s story. They say they looked up the director, and they saw me, and they were like, “You look like me. I can’t believe you made this film.” There’s so much goodness and love in this project, and I want people to be able to draw as much from that as they can.