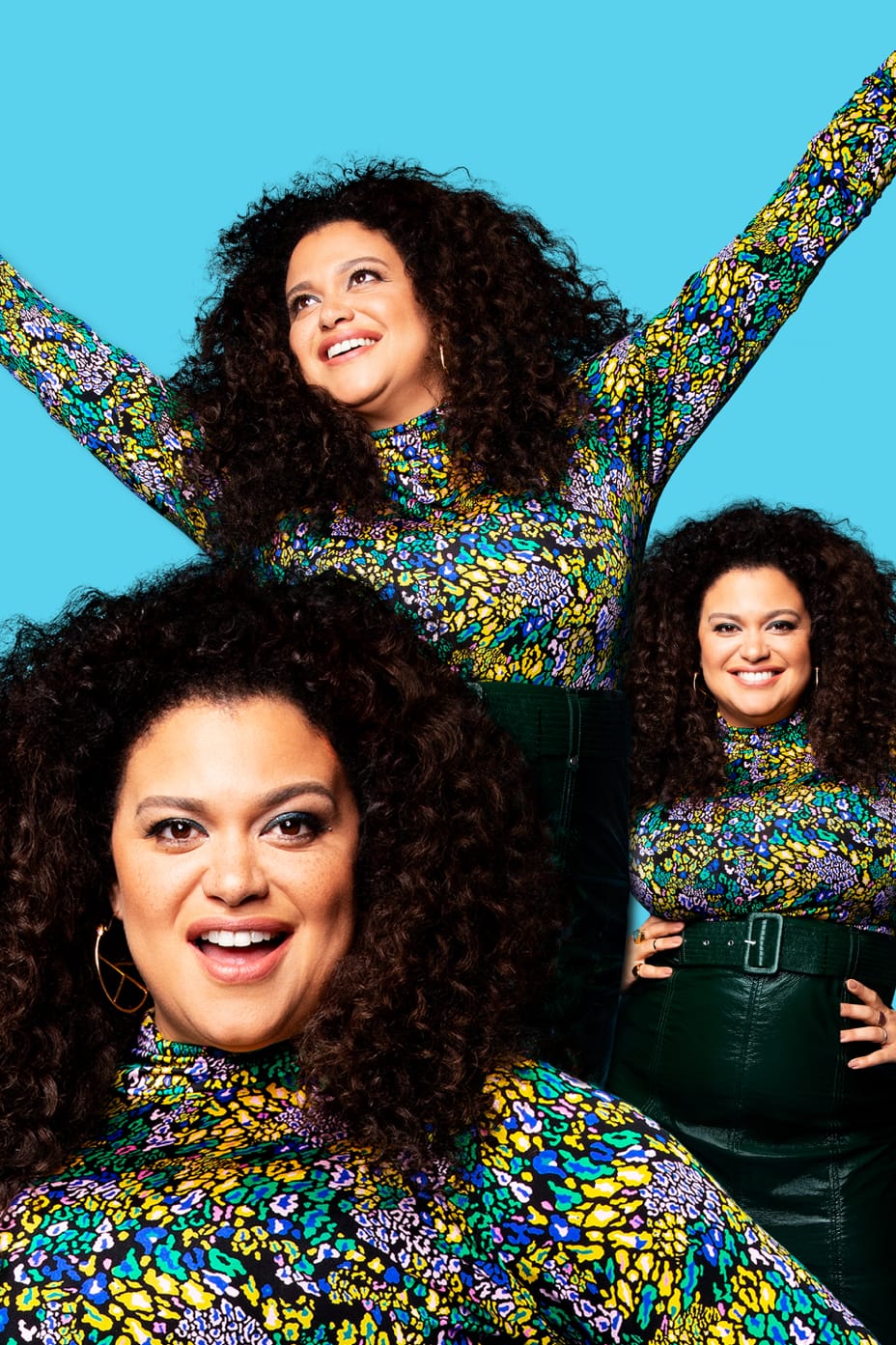 An Army of One

Comedian Michelle Buteau keeps building her empire of funny. Next up: her exuberant new special, Welcome to Buteaupia.

If it feels like you’ve been seeing Michelle Buteau everywhere recently, you’re not wrong. Not only does the comedian and actress have a brand-new Netflix special, Welcome to Buteaupia, she also appears in a slew of upcoming films, including Marry Me, with Jennifer Lopez; The Stand-In, with Drew Barrymore; and Happiest Season, alongside Kristen Stewart. That’s in addition to hosting Netflix’s wickedly addictive reality competition series The Circle, delivering memorable turns in Tales of the City and the romantic comedy Always Be My Maybe, recording her podcast Late Night Whenever, and writing the upcoming essay collection Survival of the Thickest.

Her secret? “It takes work,” Buteau says. “Everyone that is successful has worked their ass off. Oh my God, these basic people out here just expecting shit to happen because they have a sex tape and a crop top! Get the fuck out of here with your crop top. That goes for men and women. I hate when people ask me how to do something. ‘How do I make money? How do I become popular?’ That is lazy. If you’re going to do something brave, then you have to be brave. Put yourself out there and just do it.”Buteau’s been channeling her bravery for years, winning over ever-larger audiences with her unflinchingly honest, gleefully confrontational style. She’s not afraid to spin art or laughs from her personal life, whether it be from her Catholic upbringing as the daughter of Caribbean parents in New Jersey, or from her recent experiences with infertility (she’s now the proud mom to twins Hazel and Otis, born via surrogacy). “My family’s so Catholic and conservative that me talking about sex or an abortion or anything onstage feels wild,” Buteau says. “But I’m like, This is just who I am. I have to speak my truth.” 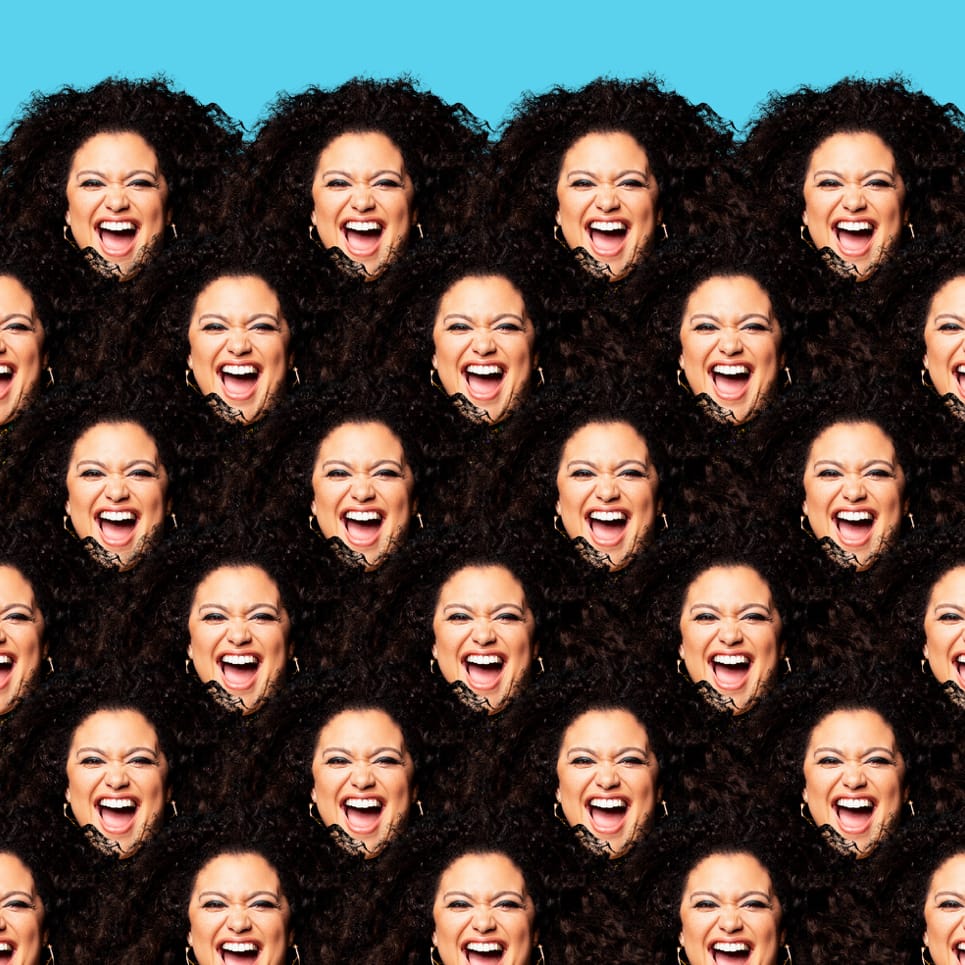 Krista Smith: Welcome to Buteaupia is excellent, and it was so exciting to see a live audience.
Michelle Buteau: We filmed that March 1st at Sony Hall in New York City right in the heart of Midtown. It’s this beautiful music venue that also lends itself to other types of shows. The venue spoke to me because it just felt like a sassy night out in New York City. March 1st was my grandmother’s birthday, and we would always make it a thing and go down to Jamaica for her birthday. I’m so thankful I picked that date, because I’m like, Grandma’s trying to make sure I get checks! It was wild. We had no idea. Yes, we captured a night out in New York City, but I think it also looks like the last night out in New York City.By March 10th, the whole world was shutting down.
MB: You’re absolutely right. The shutdown, we were like, Two weeks? All right, I guess we’ll just hunker down at home for two weeks. And then all the toilet paper went missing. All the bread was gone. All the yeast was gone. Everybody just turns to Jesus Christ, baking their own stuff, making their own furniture. I knew it was going to be a bad time when the frozen vegetables were gone.Let’s talk about this special. How long does it take you to get that perfect hour of comedy?
MB: Everybody has a different process. I think it should take at least three to five years of life experience and stage time to get it all together. The last stand-up special I did was a 15-minute set on Netflix in 2018. But I was also working on these movies that hadn’t dropped yet, and I was in this process with my surrogate that was pregnant with our babies.I couldn’t really figure out what I wanted to say, and it was weird because as soon as the babies were born, I’m like, Oh, I’m back. This is what I’m complaining about; this is what I’m celebrating; this is my sassy finger, drunk auntie at the family reunion, hell no no no. I was mulling on a bunch of stuff, not knowing that I just needed to meet these little souls before I could close that chapter and open another one.
“

If you have to think twice about it, then you probably shouldn’t
say it.

You push the boundaries as a mom and a woman and a wife. You talk about the surrogacy, what’s going on with your husband. How do you manage what to say and what not to say?
MB: I have a line for myself. I’m not an asshole, so I don’t want people to feel like they’re in my life just so I can write jokes about them. I think some subjects are universal: You go through that? I go through that too. Especially being in an interracial relationship, I’ve got to talk about that. But I’m not going to get into details. I still want to be respectful, and I think a lot of comics struggle with that — what’s personal, what’s funny. If you have to think twice about it, then you probably shouldn’t say it.

I want to take you back to the beginning. After college, you were working in media. Were you thinking about becoming an actress, or was the endgame having your own comedy show or doing stand-up?
MB: I never thought I could be an actor. I never thought I could be a comedian. I actually wanted to be a journalist. I was field-producing and editing local news and some pop culture things. After a while I was like, I am so tired of making basic bitches look good. I had co-workers that kept telling me I needed to do comedy because I was so funny. But all the shows I went to, people just seemed sad or depressed, or they’re talking about jerking off or blow jobs. It’s all very self-deprecating. I just didn’t see myself anywhere.Then 9/11 happened, and I was like, This is horrible. I should just try stand-up. I should just do something.Where was the first place you performed?
MB: Stand Up NY, September 14th, 2001. 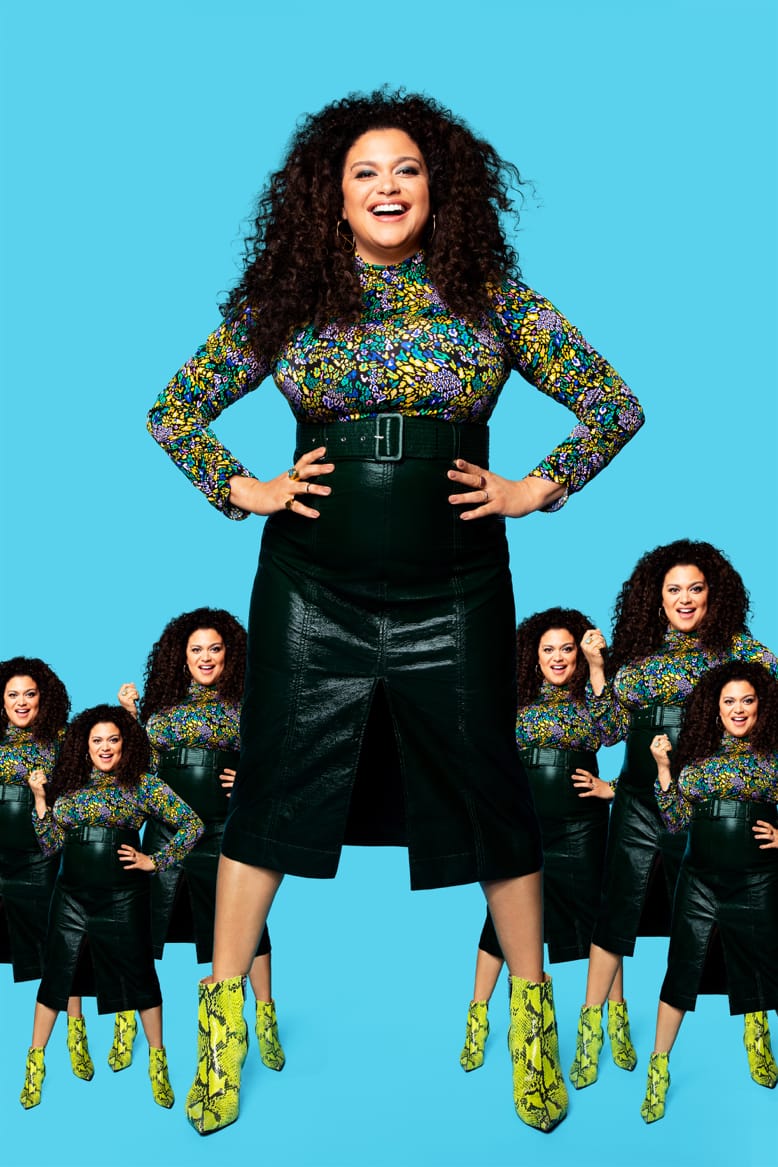 Did you have a breakthrough moment where you were like, Oh, I can do this!?
MB: I don’t think I had an “I can do this” [moment]. I just thought, This is so fun, all I know is that I want to do this again. For six years, I worked overnight shifts at NBC at Rockefeller Center editing the news, and before I’d go in on my midnight shift, I would do two or three shows in the West Village for free.

When you were first asked to headline, how did that go?
MB: It was really hard. Nobody really wanted to give me a chance. I mean, there were things called bringer shows, where if you bring eight people, we’ll let you do 10 minutes; or we’ll let you headline if you want to go to Rochester; or we can let you co-headline with this other basic white dude.Do you feel like there are different rules for men and for women?
MB: Yeah. For a woman in a comedy show — it’s changing now, but usually you’re the only woman because any more than one female becomes some sort of “female comedy show.” You’re always going to be the memorable comedian onstage because you’re the only one that’s not a man. Even your voice is annoying to some people who don’t want to listen to a woman with opinions. So already you have to be better and faster and stronger than all the other comics in order to keep people’s attention and have a decent set and get booked again. Whether it’s stand-up comedy or any other job, women just have to go through that shit.
“

At the end of the day, we’re all just these beautiful souls walking
around,
trying to be happy and
feel heard and understood.

When you’re onstage, when are you at your most vulnerable?
MB: When I’m really opening up about women’s issues, my health issues, my surrogacy . . . race relations — stuff that I know won’t get a laugh. I’m like, O.K., this is for the both of us. This is for me, and it’s just as much for you.

To talk about what’s going on with you, you have to admit that something’s wrong. I feel like everybody’s just walking around like they’re O.K. There’s something not only beautiful but also so important with sharing whatever you’re going through. You could be saving somebody by talking about what you’re going through.What are some of the more interesting responses you’ve gotten from audiences?
MB: Everyone’s a doctor, even though they’ve never been to med school; a lot of people have advice and opinions that I really didn’t ask for. One person told me, “If you were doing less comedy, maybe you’d be able to stay pregnant, because you wouldn’t be working as much.” I’m like, “Thanks for coming to the show. Goodbye.”For the most part, it’s not only women but it’s men who are like, “I have gone through this I.V.F. struggle with my wife, and thank you for talking about it”; it’s gay couples who also have to take an alternative route to having their own family. At the end of the day, we’re all just these beautiful souls walking around, trying to be happy and feel heard and understood.What have you learned from watching other women in this industry?
MB: I love working on all these female-forward, queer-forward, trans-forward shows, because we are the minority, and like I said before, we have to be better than everybody else in order to get picked up for another season, in order to be trending or heard.It feels like real boss bitches don’t apologize. As a Black woman, whether you’re going to the doctor’s or you’re ordering food at a restaurant, everyone assumes that you have an attitude. I’m so over that shit. I am all the way over it. Stand in your fucking power. If somebody doesn’t know how to live in your shine, then they have to go somewhere else that is dim. Don’t dim yourself for somebody else. 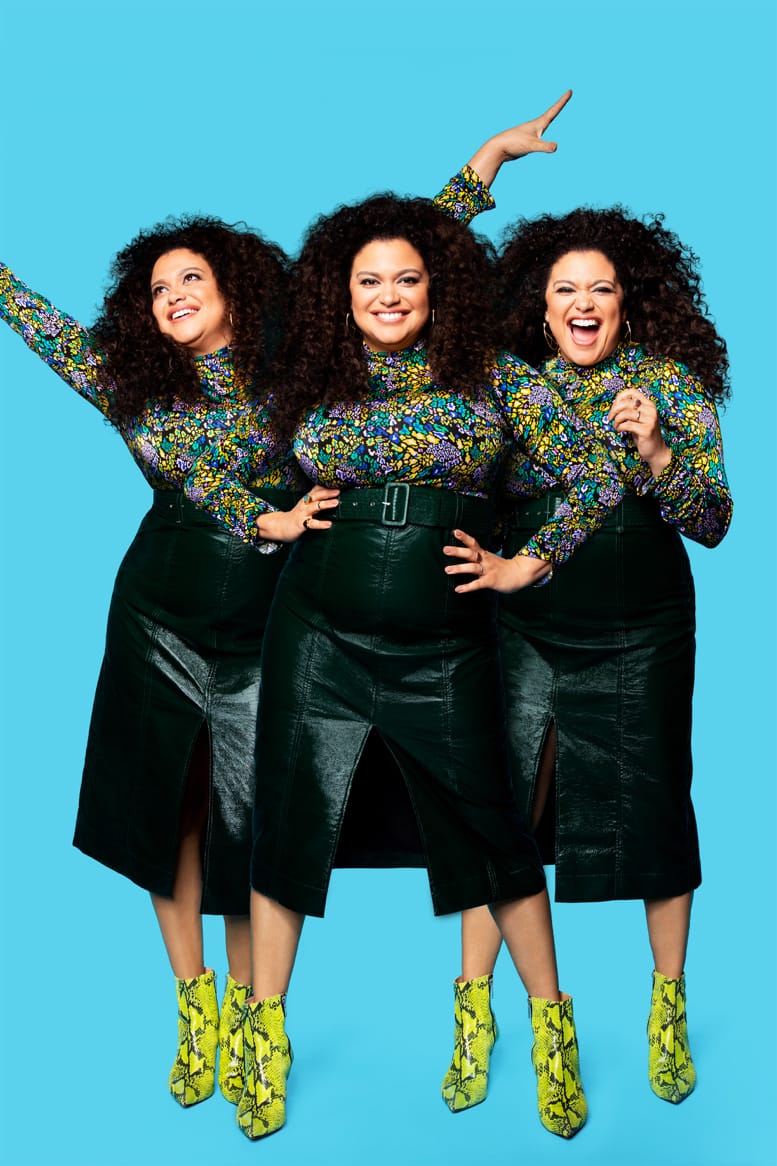