Liz Feldman mines comedy from tragedy in her female-fronted series Dead to Me.

In Season 2 of Netflix’s critically acclaimed dark comedy Dead to Me, audiences gasped when Christina Applegate and Linda Cardellini opened the door to find James Marsden standing there. After all, his character, Steve, died a gruesome death at the end of Season 1. So what the hell was he doing on the doorstep?

“It was James Marsden’s fault,” says Dead to Me creator Liz Feldman, laughing. After Season 1 premiered, the ever-charming Marsden emailed Feldman to say thank you, and that’s when he planted the germ of a great idea: Hey, is there any way Steve could survive a traumatic brain injury and drowning? Because I’d love to keep working with you. Feldman brought up the email at a lunch with Kelly Hutchinson, a writer on the show and one of Feldman’s longtime best friends. “We looked at each other, and at the exact same time, we said, ‘Twins?’ We started laughing in this restaurant. We could not contain ourselves.” This kind of clever, soapy psychological nuance is the bread and butter of Dead to Me, which follows two women — Jen (Applegate) and Judy (Cardellini) — who meet in a grief support group and become close friends. Both of them are mourning their partners’ deaths — complicated enough before you throw in the fact that Judy (accidentally) killed Jen’s husband. “In my heart of hearts I am a comedian first and foremost, and if something makes me laugh, I have to explore it and go down that road,” Feldman says. 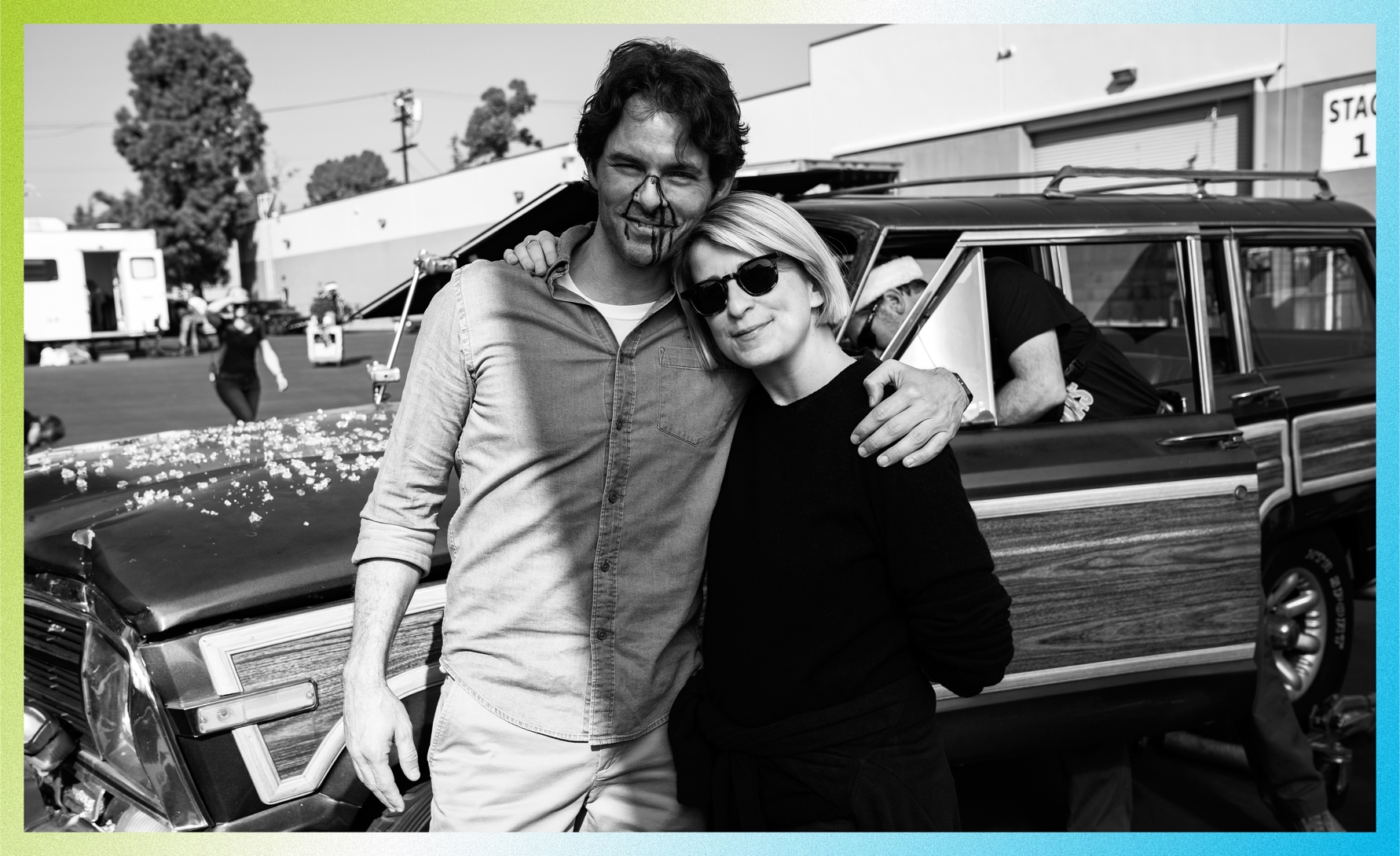 Feldman famously started doing stand-up at an age when most people are busy studying for their driving tests. She’s an alum of both Second City and the Groundlings, and went on to write for 2 Broke Girls, Hot in Cleveland, and the Academy Awards. She also hosted the YouTube talk show This Just Out, and created the sitcom One Big Happy, starring Elisha Cuthbert. Along the way, she won four Emmys as a writer and producer for The Ellen DeGeneres Show.

Dead to Me grew out of personal experience. Around her 40th birthday, Feldman was coping with failed fertility treatments and the sudden death of her cousin, with whom she was close. She channeled her heartbreak onto the page, filtering it through a devastating sense of humor. “It feels like I went through what I went through for a reason, so that I could help in some small way, help other people feel less alone in their difficult experiences,” she explains. Working with Netflix on Dead to Me represents a new adventure for Feldman, who has spent most of her career in network television. She won a Writers Guild Award for the show earlier this year, and thanked the producing studio (CBS) for not saying, “Can you turn it into a multi-cam?” Not that she has anything against sitcoms. “They’re wonderful in their own right, but in terms of writing, it’s a fairly formulaic process,” she explains. “You have 21 and a half minutes to tell a story, and it’s actually really hard to do that form well. With Dead To Me, I’ve been given an opportunity to tell a very complex, continuous story over 10 episodes, which is really rewarding because you can delve deeper into the psyches of the characters. It also allows for those twists and turns that hopefully make the show so fun to watch.”
“

In my heart of hearts I am a comedian first and foremost, and if something makes me laugh, I have to explore it and go down that road.

Feldman writes from an empathetic place, constantly working to imagine her characters’ points of view. She runs the Dead to Me writers’ room that way as well, which perhaps gives the show more heart than similar comedies. “We want the show to be surprising and potentially even to undermine your expectations. But we want it to be grounded and feel completely justified,” she says. For Season 2, that involved coming up with a solid foundation for Marsden showing up as Steve’s twin. It also meant finding a way for Jen and Judy to restore their relationship after all the messy drama that tore them apart in Season 1.

“We wanted to represent what a true friendship can be, which is two people holding a mirror to each other — for better, for worse,” Feldman says. “We all are who we are, but we can’t help but be influenced by the people we’re closest to.” 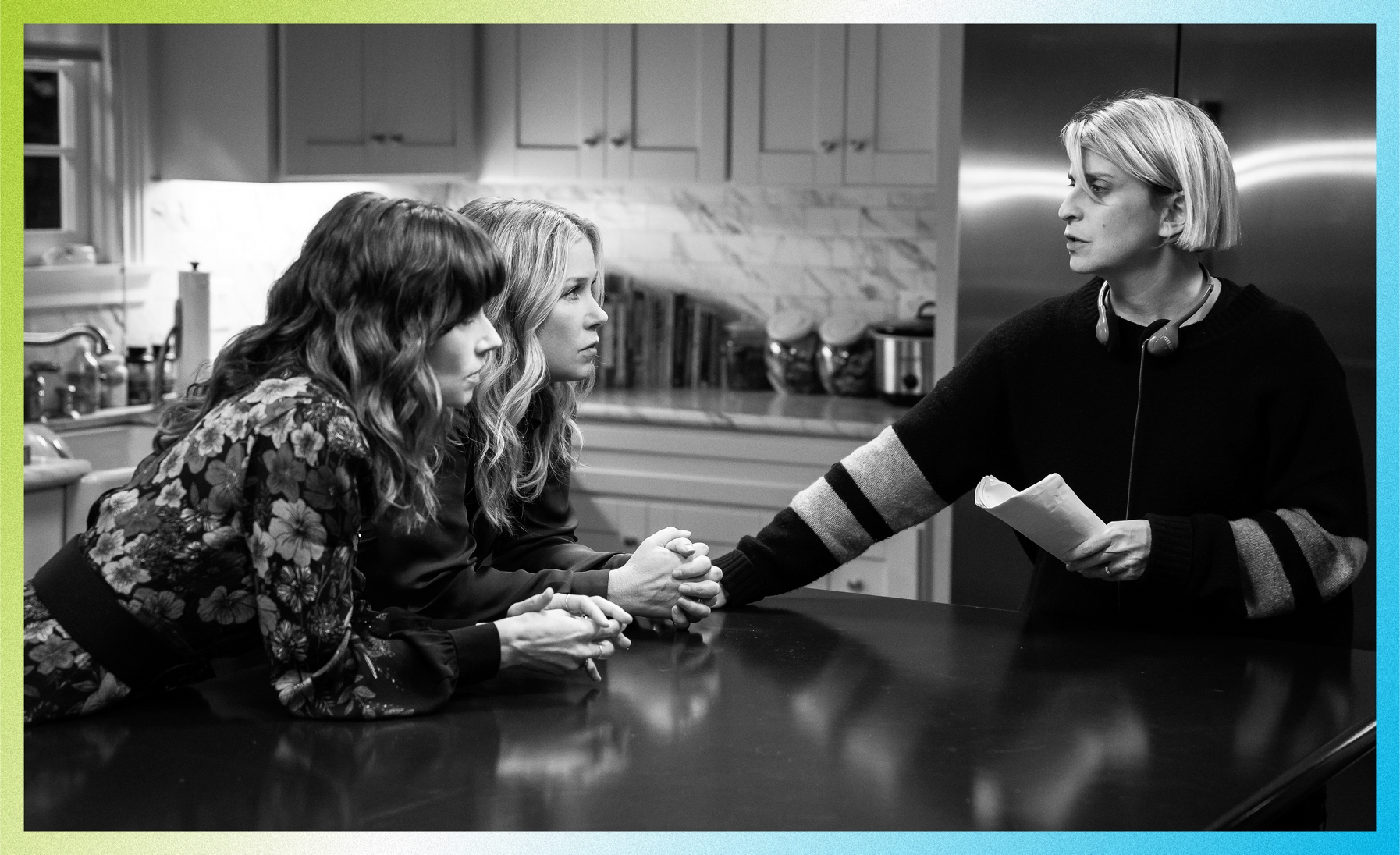 Behind the scenes of Dead to Me with Linda Cardellini, Christina Applegate, and Liz Feldman

The bond between Judy and Jen is at the heart of the show. In Season 2, Judy’s compassion influences Jen, and Jen’s straight-talking, no-bullshit attitude rubs off on Judy. Each actress has a distinct approach that serves her performance. “Christina is a very in-the-moment actor. She’s just in it,” Feldman says. “Linda is always exploring a different way, a surprising moment, an authentic reaction.”

Sometimes, watching them work, Feldman finds herself experiencing a surprising range of emotions. “Linda and Christina are such incredible actresses that even when I’m on set, behind a monitor, they are so authentic that I can’t help but feel it too,” she says. “So there definitely were moments in both seasons where I had to walk away and sort of go cry in a stairwell so that I could just move through those feelings and be able to come back and run the show.”
“

We want the show to be surprising and potentially even to undermine your expectations. But we want it to be grounded and feel completely justified.

These days, Feldman is back at work, finalizing plans for the future of Dead to Me. She’s keeping mum about where the story might go next (no spoilers about the Greek mafia or money-laundering schemes here), but she is happy to confirm that the series will continue to navigate the complexities of friendship and grief. It will also remain committed to normalizing female anger.

“When a male character gets to be angry, he’s a lovable curmudgeon, or he’s a cop with a chip on his shoulder, or he’s a dad,” Feldman says. “I wanted to show that women get angry too. It’s messy, and it might not be pretty, but it’s necessary and it’s cathartic.”

Watch Dead to Me
on Netflix now.