“I was crying so hard my wife came into the room to see what was the matter with me,” Mills says. “I found it extremely triggering in a way that was healing and awesome.”Johnson, a longtime cinematographer and documentarian, is a groundbreaker, known for her beautifully unconventional cinematic memoir, Cameraperson. Charging forward with Dick Johnson Is Dead, she triumphs at the unthinkable. She imagines and, with the help of a stuntman, stages the myriad ways in which her own father might die. Wildly game, Dick Johnson is a gleeful participant in the venture — not to mention a natural in front of the camera, even as his dementia progresses over the course of the film. “The idea was to gather these unexpected true moments that would be devastating to me,” Johnson says. “We were trying to break these edges that we pretend in.”As she conceptualized the film, Johnson turned to Mills for guidance and moral support. He proved an important sounding board, with a keen understanding of her drive to break constraints. With the movie complete, the duo reconnected for a candid conversation about life, death, and the transcendent power of cinema. 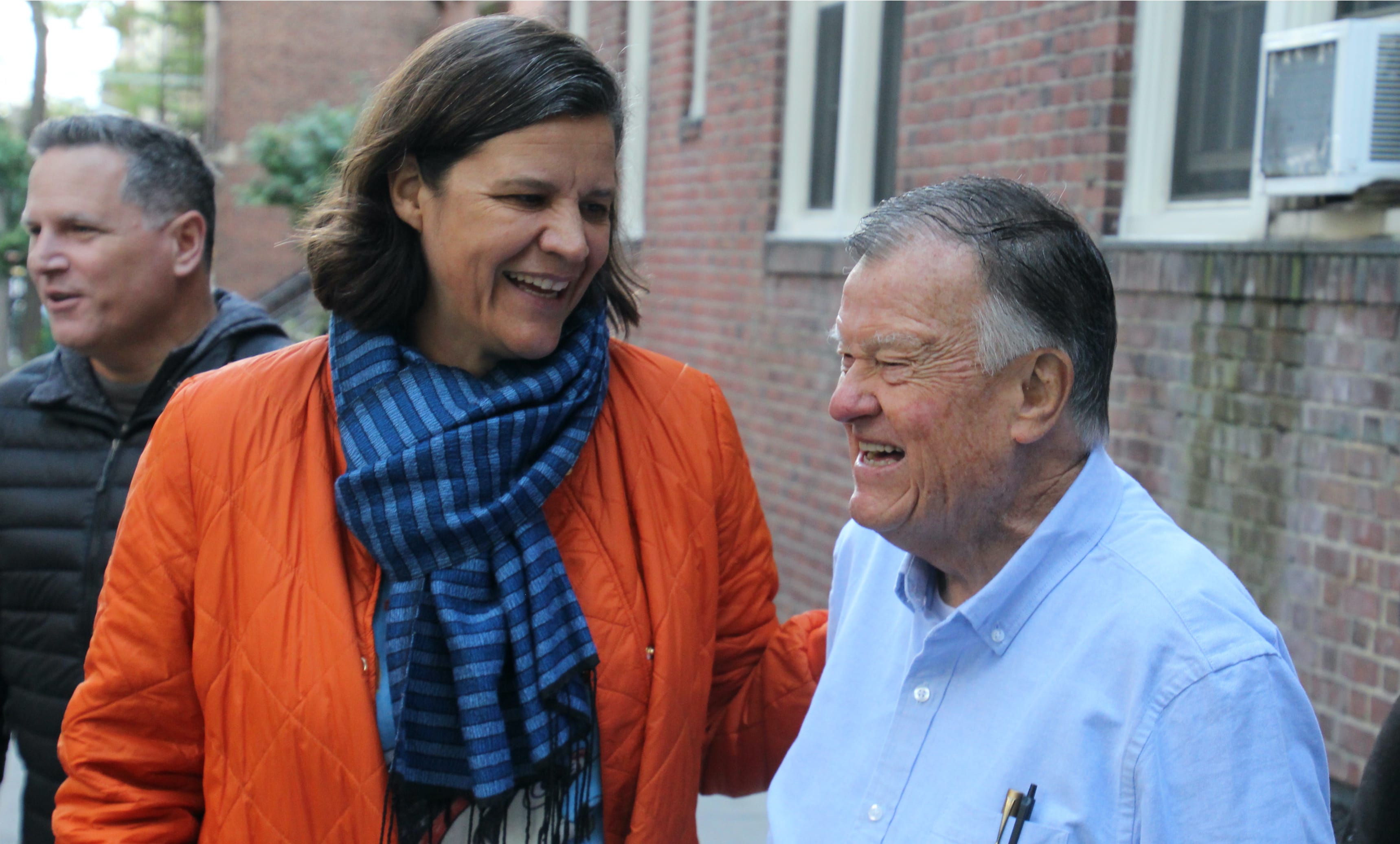 Kirsten Johnson with her father and the subject of her film, Dick Johnson

Mike Mills: ​You’ve said about Cameraperson, “I can and will leave a place I film, whether a war or a refugee camp, while the people I film cannot.” When I started watching Dick Johnson Is Dead, I was like, Oh, she did the opposite. Here’s a situation you can’t leave — that’s unbearable in some ways, unthinkable in some ways — and you not only sat with it, you made a film about it. This movie is so defiant. It has such delicious impropriety, both in terms of filmmaking rules and life rules. In the service of a life more fully lived, you did this semi-monstrous, awesome thing.

​Kirsten Johnson: I was trying to make a crazy film with my dad where I kill him over and over. So I called you and I also called Nash Edgerton, who has been a stuntperson. We had these amazing conversations about how we do vulnerability in cinema: How is it possible? And how do we pretend that vulnerability isn’t happening in cinema, like in the case of the stuntman, who’s trying to kill himself on behalf of the movie? It was cool that I was catching you at the beginning of the process, and that we’re talking now, as the film enters its life. For me, audiences keep making films. We were trying to leave all this space in the movie for people to do their own thing, to cry for their own reasons.
“

I can’t keep my father alive forever, but there is a way in which cinema can bring people back to life.

MM: Both my parents are gone, and it was some of the quieter scenes — like your dad and the soup, your dad napping and how sweet it is — that really got me. There’s also this thing that you do (we got a little bit of it in Cameraperson) where you’re having a conversation, and you put down the camera and you touch the other person. To me, it’s one of the best shots in cinema. The camera’s shooting the floor, but you still hear the sound. There’s this action of you putting the camera aside. It’s ripping apart the film in a way that’s liberating. It’s tearing down conventions. To me, that’s bigger than what you did with the fiction elements or the fantastic, camp elements, which also made me cry. It’s a similar move: Let’s just tear it all apart.

KJ: When we did that, we broke things. There was this wish of defiance, like you say. I wanted to say to death, “I’m sorry, you can’t have this one.” I think cinema might be able to help me do this. I can’t keep my father alive forever, but there is a way in which cinema can bring people back to life. In Cameraperson, the wonderful editor I work with, Nels Bangerter, did this cut where my mom’s ashes are there on the screen, and then boom! he cuts to footage of her alive. From still to alive — cinema can do these crazy things. How can we push it into crazier and crazier territory? Maybe by doing that, we can defy time, we can defy genre, we can defy death and defy dementia. I can reassemble my father. I can show him looping in these tiny loops, but then I can expand him through the slow motion of the dance scenes, expand his smile to last longer. 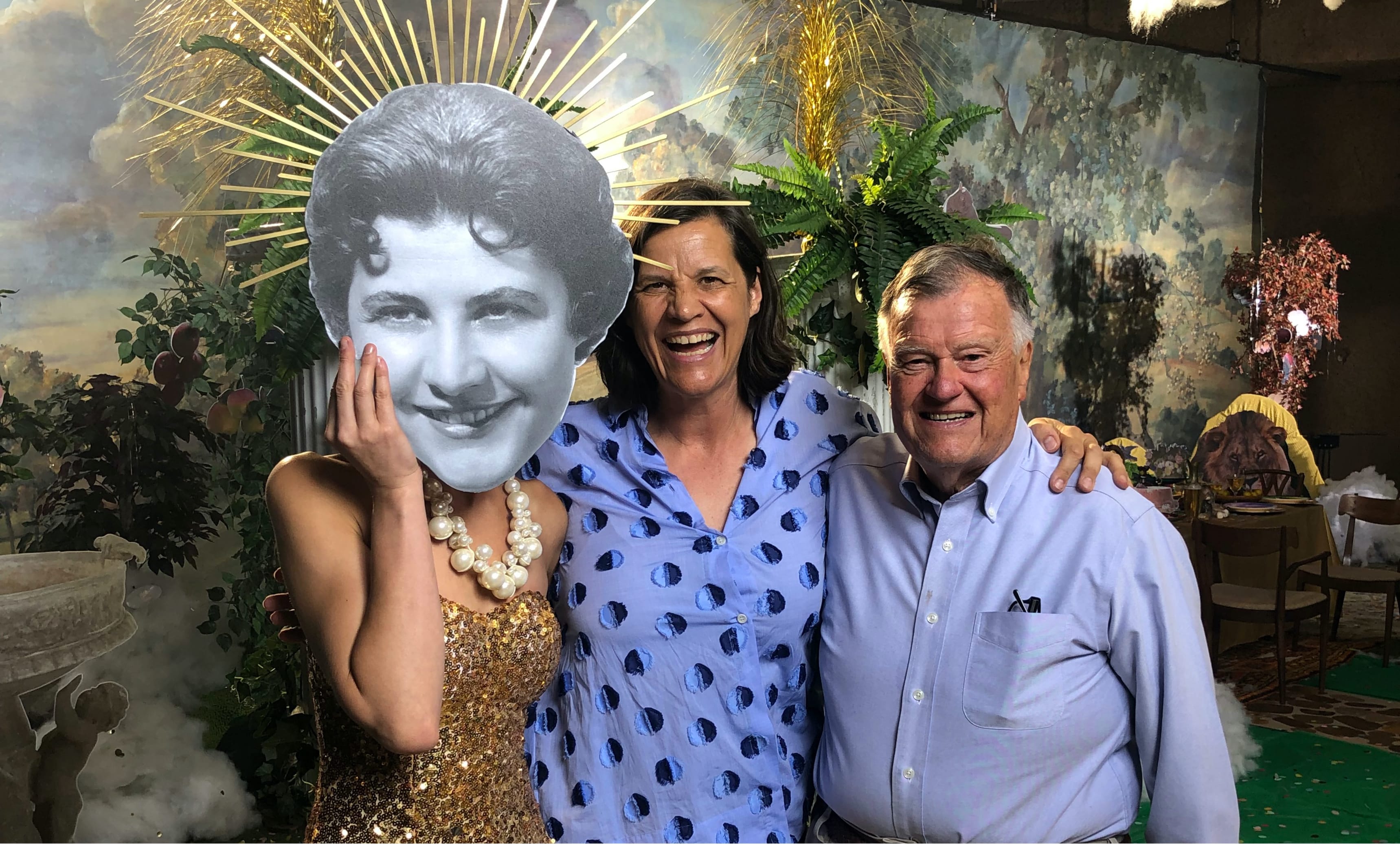 Kirsten and Dick Johnson on set

MM: There’s a shot of him in the car where the camera’s on the dashboard and it’s just his face. He’s looking vulnerable and childlike. That was evocative. I’ve seen that face. I really appreciated that the film worked on that level — very experiential minutiae. I don’t need any theories; I just need that face. It’s what you might call a cinéma vérité goal, right? A camera and a face. You don’t need to know anything and it’s going to communicate to you. The smallness of the goal there, I appreciated.

I loved how camp you got, too. When your dad’s playing the clarinet and the backup singers have these crazy looks on their faces, it’s like a grotesque. That’s very novelistic territory. It’s like a whole other world, handled on your own terms. That’s hard to do as a director, to keep your own DNA strong in such different spaces.
“

A camera and a face. You don’t need to know anything and it’s going to communicate to you.

KJ: ​It was a real breakthrough. I realized that what I do when I film documentaries, I can do in a fictional space. It took a lot of preparation, and it took a lot of discussion with our producers to understand how that might be possible, but then we totally did it. There are several really strong intentions that we brought to this film. The wish was that this movie would teach us how to make it. We’d do processes that you usually do at the end at the beginning and the middle. We edited very early. We went into the sound mix extremely early: Let me hear a different tone for what this death could feel like. Let’s do the trip so it’s really comical. Let’s do the trip so it gut-punches you. Let’s do the trip so you hear the head knock against the concrete.

My worry was always how to manage tone in this film. It’s tonally all over the map — like dementia and like love and like relationships. It was always this idea of a back and forth between what we know and what we don’t know, between what is and what will be. My father is alive; he will be dead; there is a moment when we’ll look back on his death.We as documentarians know that every single day you shoot, something happens that is so beyond your imagination. I could be on the set not knowing what was going to happen. My father’s dementia had advanced to a place where we had no idea what he would be willing to do or not willing to do. There was just no telling. Yet there was something wonderful about Dad’s dementia. We could do everything over and over again, and there was a lack of self-consciousness that came with that. Let’s see where this takes us. There’s a playfulness in this project. 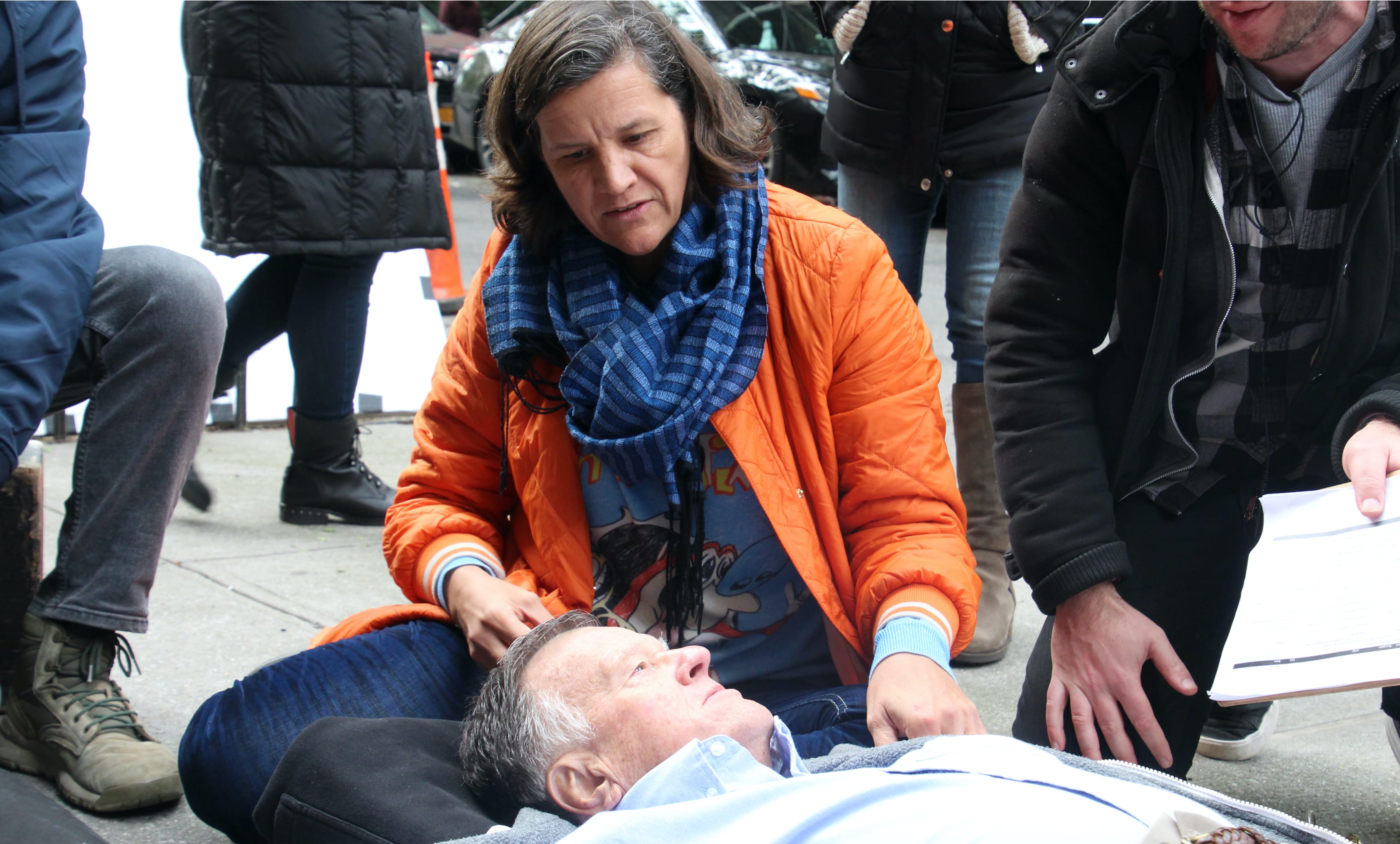 MM: What a rad person, your dad, and what an amazing performer. He has such positivity toward life, and loves you so much. Not all parents and children get that. Why is he such a fucking good performer?

KJ: ​He’s such a ham. He makes terrible jokes. He has no rhythm, then suddenly Benny Goodman is playing and he’s swinging. I’m like, What’s happening?!MM: ​When he’s looking at the mask of your mom, that’s an amazing performance. That’s one of the many times that the film shape-shifted, broke its form, did something unasked for and beautiful.KJ: When you’ve known really difficult pain, you can imagine how unimaginable it’s going to be, how hard it’s going to be. With this film, it was unimaginable how much joy it gave us. We couldn’t have imagined it, yet that’s what manifested.I feel strongly about this film existing in the world in this moment where we are all struggling with not knowing what the future is. We have this chance now to break form on all levels in our need to connect with each other and support each other — to not live in fear and denial, but actually to live in transformation as the world transforms. 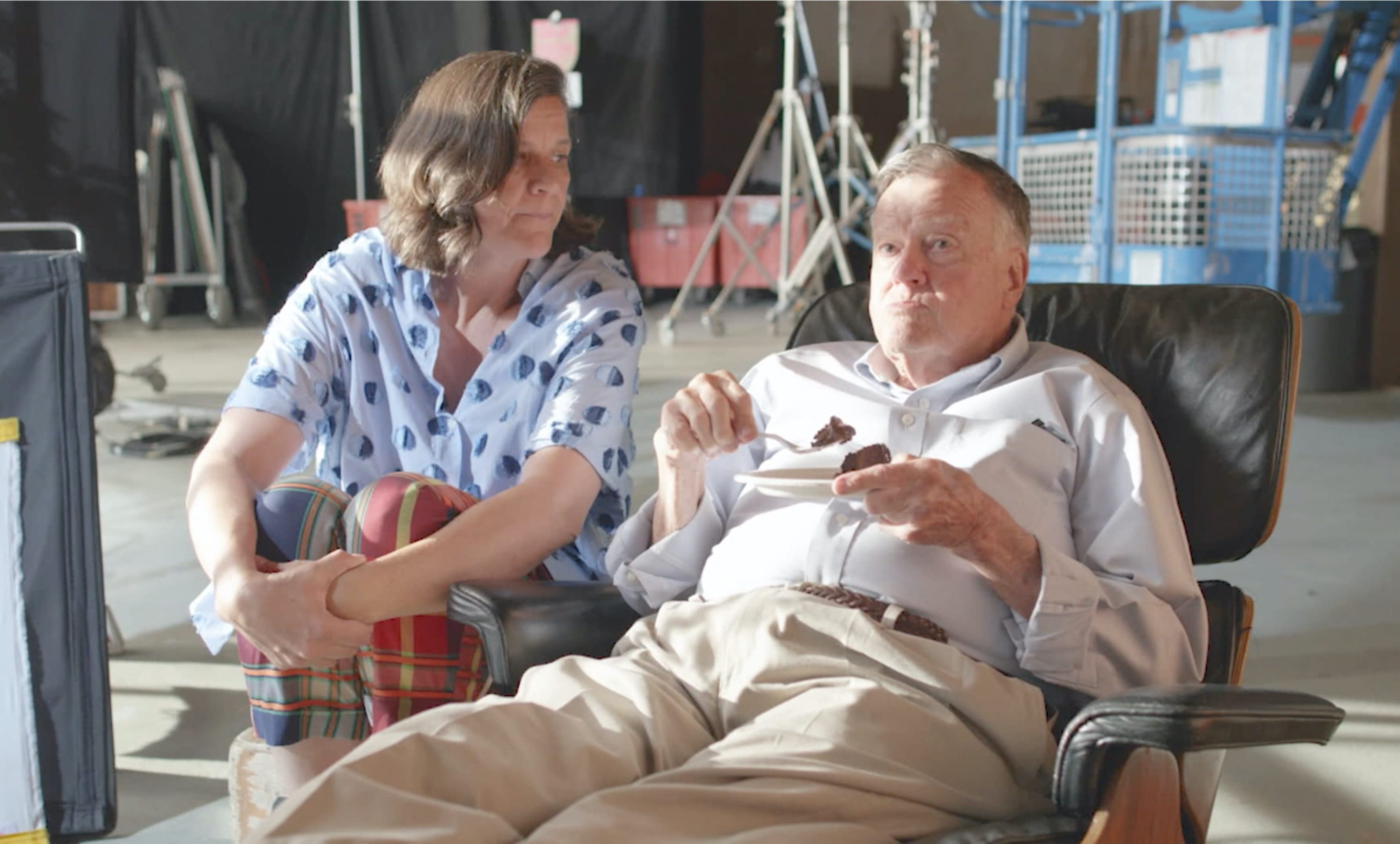 MM: ​That was a nice relief in this world that’s become so gaseous and toxic, where there’s this anxiety of formlessness. You broke so many forms. You broke so many rules. I thought of a lot of ​Agnès Varda’s documentaries. I was like, That was a rock that Kirsten just threw through my screen. And it’s so nice to have a rock that’s heavy and real.