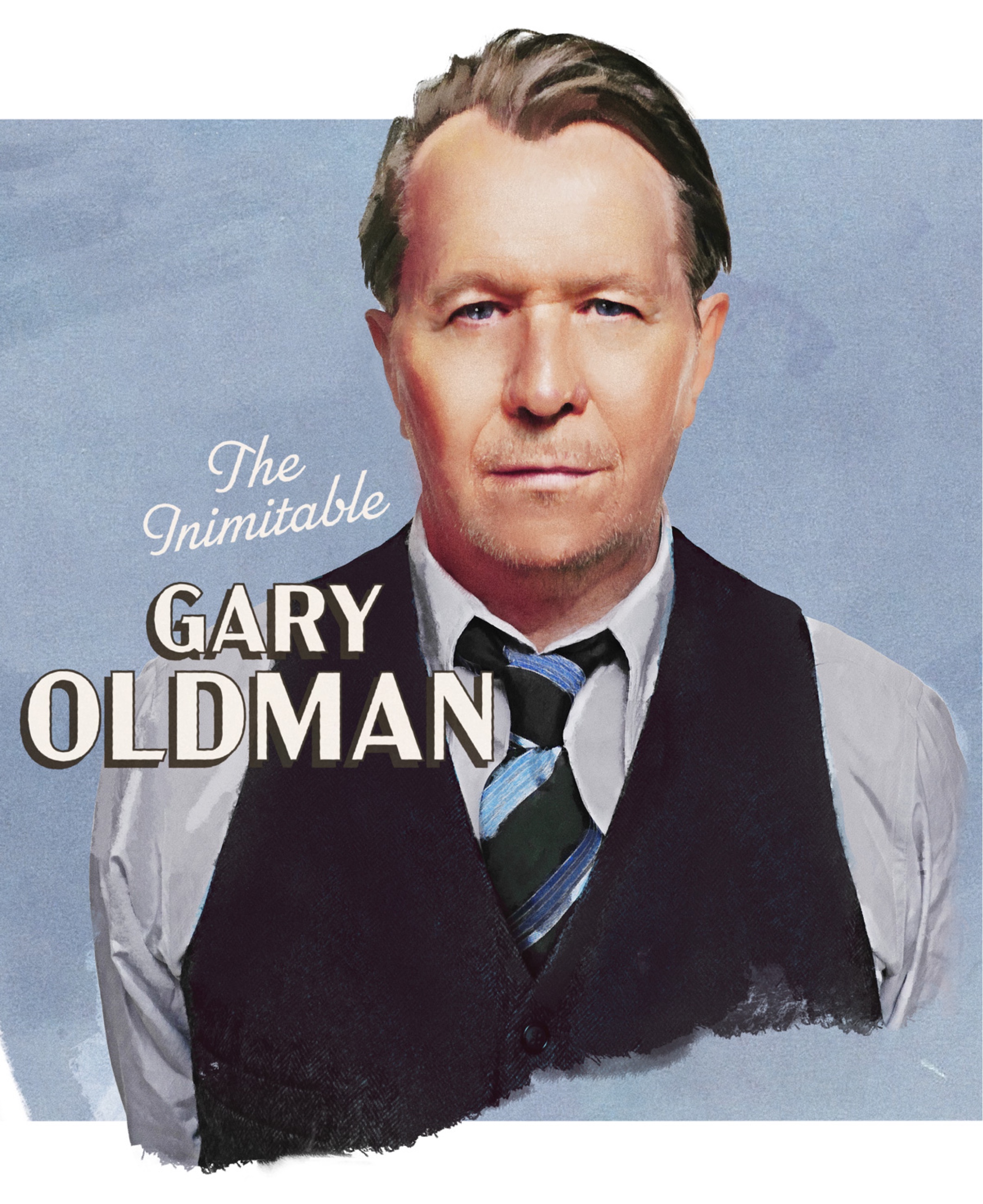 Gary Oldman channels one of Hollywood’s most brilliant writers in Mank.

The last time Gary Oldman portrayed a historical figure onscreen, it won him an Oscar. For Joe Wright’s drama Darkest Hour, the stalwart English thespian donned layers of impressive prosthetic makeup as he transformed into none other than Winston Churchill. But in David Fincher’s Mank, Oldman plays a very different sort of man (albeit from the same era): the exceedingly witty and equally flawed screenwriter Herman “Mank” Mankiewicz. Fittingly, he took a very different approach.

“David said to me, ‘I want you to be as naked as you have ever been,’” Oldman recounts. “I resisted it at first. I do like a nose or a pair of glasses to hide behind — give me a glass eye or a scar or a wig or something! It wasn’t until I started to move and breathe in the language, and then in the clothes and the shoes, that I realized he was right. No fireworks, no fancy dress. Just come in and be as completely open and as naked as you can be.”Mank, written by David Fincher’s late father, Jack, tells the story of how Mankiewicz came to pen Orson Welles’s masterpiece Citizen Kane while recuperating from injuries sustained in an automobile accident. At the same time, it explores the relationships that shaped his trajectory, including his close friendship with actress Marion Davies (Amanda Seyfried). The film flashes back through Mank’s whiskey-soaked memories, as the screenwriter swaggers through studio lots and political soirées. He’s rarely sober, yet always quick to direct a barbed comment at both his benefactors and his adversaries — a roster of players that includes virtually every figure from the movie industry’s Golden Age.“If I had any reservations, they were to do with it being a story about a writer in Hollywood. Is it too inside baseball?” Oldman reflects. “Not only that, he’s in bed for most of it. How exciting can I make that? But it was really one of the best scripts I had read in a long time. I’d get out of bed, come into work, and get back into bed. It was, in that respect, quite a sweet gig.”

Gary Oldman on the set of Mank

Krista Smith: You’ve talked about how acting isn’t necessarily an intellectual pursuit, it’s more of a sensation and a feeling.
Gary Oldman: The process is still a bit of a mystery. There’s a certain amount of headwork that you need to do with a character like this; you gather the information as much as you can. But I’ve also said that if you were playing Hamlet, you could read every book there is on Hamlet, you could holiday in Denmark, but on opening night that won’t help you stand there and say, “To be, or not to be.” Mank was an alcoholic, and I’ve been in recovery now for almost 24 years, so in that respect I could bring a lot to the party. You have to get inside not only a brilliant mind, but a drunk mind. Drunks want an enemy. They need a villain, and Mank really had some villains. He turns on everyone who wants to help him.
“

It’s a sensation. It’s the muscles in the mouth. It’s the tongue and the teeth.

What was the moment when you first felt that you had found Mank?
GO: There are all sorts of little keys that unlock the door for you to get into a character. With this one, it was a vocal thing. Finding the voice really got the ball rolling. There’s no recording of Mank, but there are plenty of recordings of his brother, Joe Mankiewicz [who wrote and directed All About Eve]. I thought to myself that the apple probably doesn’t fall far from the tree. I started to work on that real dry delivery, that sort of throwaway delivery, with the voice of Joseph Mankiewicz. You begin with an impersonation and then you start to make it your own. You’ve got the basic root sound and timbre from Joe, and then you add a bit of smoking and some whiskey — a lot of whiskey — on top of that voice. You give it a pinch of Burgess Meredith, and you have Mank. You feel it. It’s a sensation. It’s the muscles in the mouth. It’s the tongue and the teeth. All of that is vital.

Mank is so funny as well.
GO: Orson Welles, who loved Mank dearly, said that he was the perfect monument to self-destruction. He embodied the very essence of it. He was very bitter and, of course, incredibly funny. Welles said that when that bitterness or that vile bile wasn’t aimed at you, he was the funniest man on the Earth. What we try to do — which is where Jack and then David were clever — is not to make it all about the greatest hits. You could just overload the script with all of Mank’s funny lines. We use them sparingly, but when we use them, they’re wonderful. I had some glorious lines in this film, and I relished saying them. 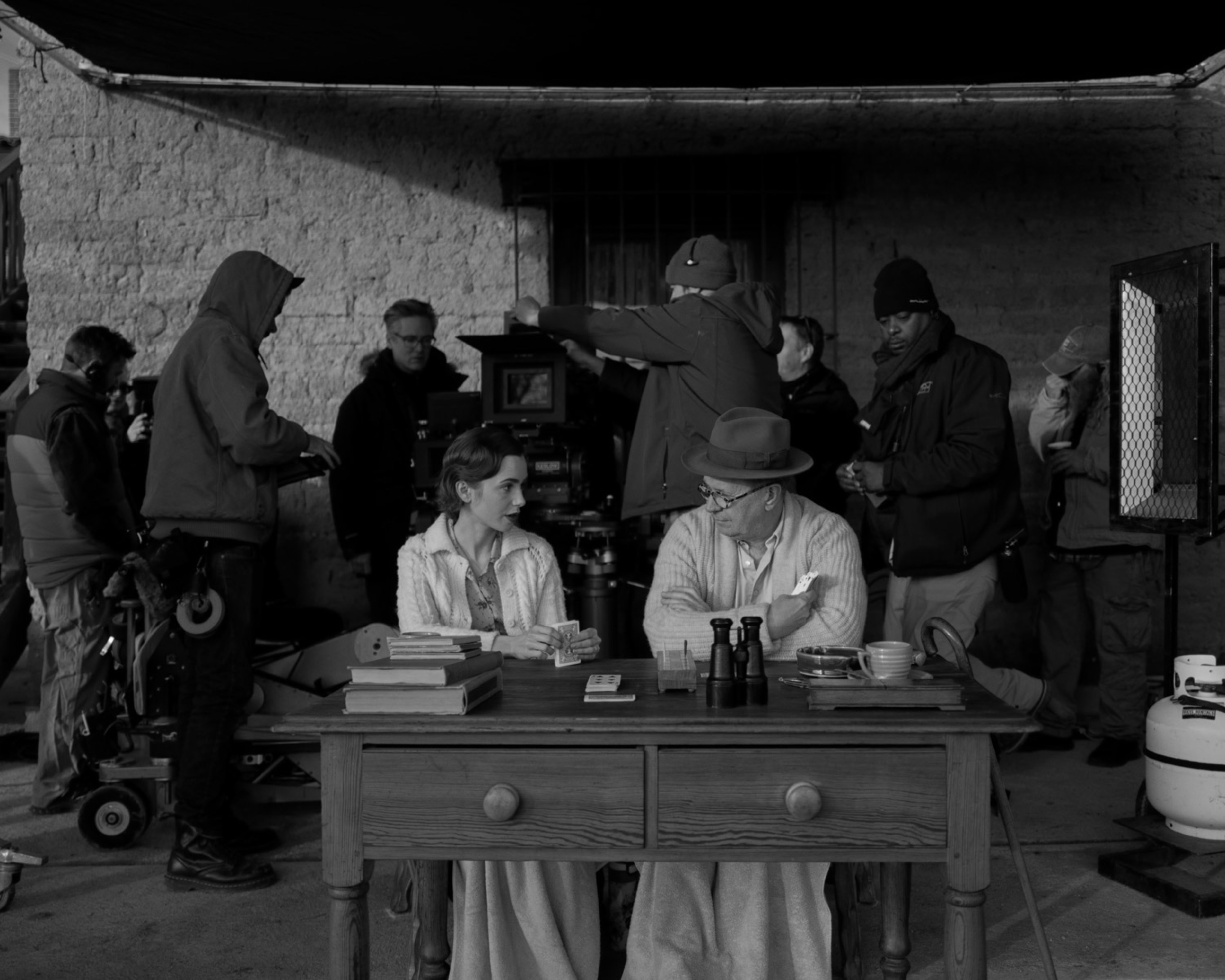 One of the things I found interesting is that conflict between the people we want to be and the people we end up being to make a living. Mank really exemplifies that idea.
GO: He looked down on screenwriting. He felt that it was beneath him. He had aspirations of being a great playwright, a great novelist — that was true writing, great literature. Writing for the movies, he had such a disdain for it. Of course, he didn’t realize at the time what a seismic shift he was responsible for in moviemaking. When you’re in the moment, you don’t always realize that you’re turning the evolutionary wheel a notch. He invited so many wonderful writers to Hollywood, and they came up with a genre. That witty, fast-paced, New York kind of wise-cracking banter, he was responsible for that.

Mank earned much of his living as a script doctor, which is basically a writer who is instructed to make an existing screenplay better or to add some jokes. Often, one script goes to many different writers, who might or might not get credit for their work.
GO: Yes. A script would have problems, and an executive would say, “Let’s run it through Mank’s typewriter and see what he can come up with.” It’s touched on in the film in passing, but Mank was involved in The Wizard of Oz. He came up with the idea that that whole first sequence should be shot in black and white, and when Dorothy goes to Oz it all turns into Technicolor. Mank wanted to root Dorothy in a reality, so that when you went to the fantastical, you earned it. I remember watching the film as a kid, and that moment where Dorothy steps into Technicolor, it takes your breath away. You’re in Kansas. You’re with Dorothy. She’s got a little dog. She sings this fantastic song. You think you’re in one movie, and then it takes you into this Technicolor fantasy. He was ultimately fired from that project, and he just moved on. I don’t know what exactly he was paid, but those ideas are worth their weight in gold. 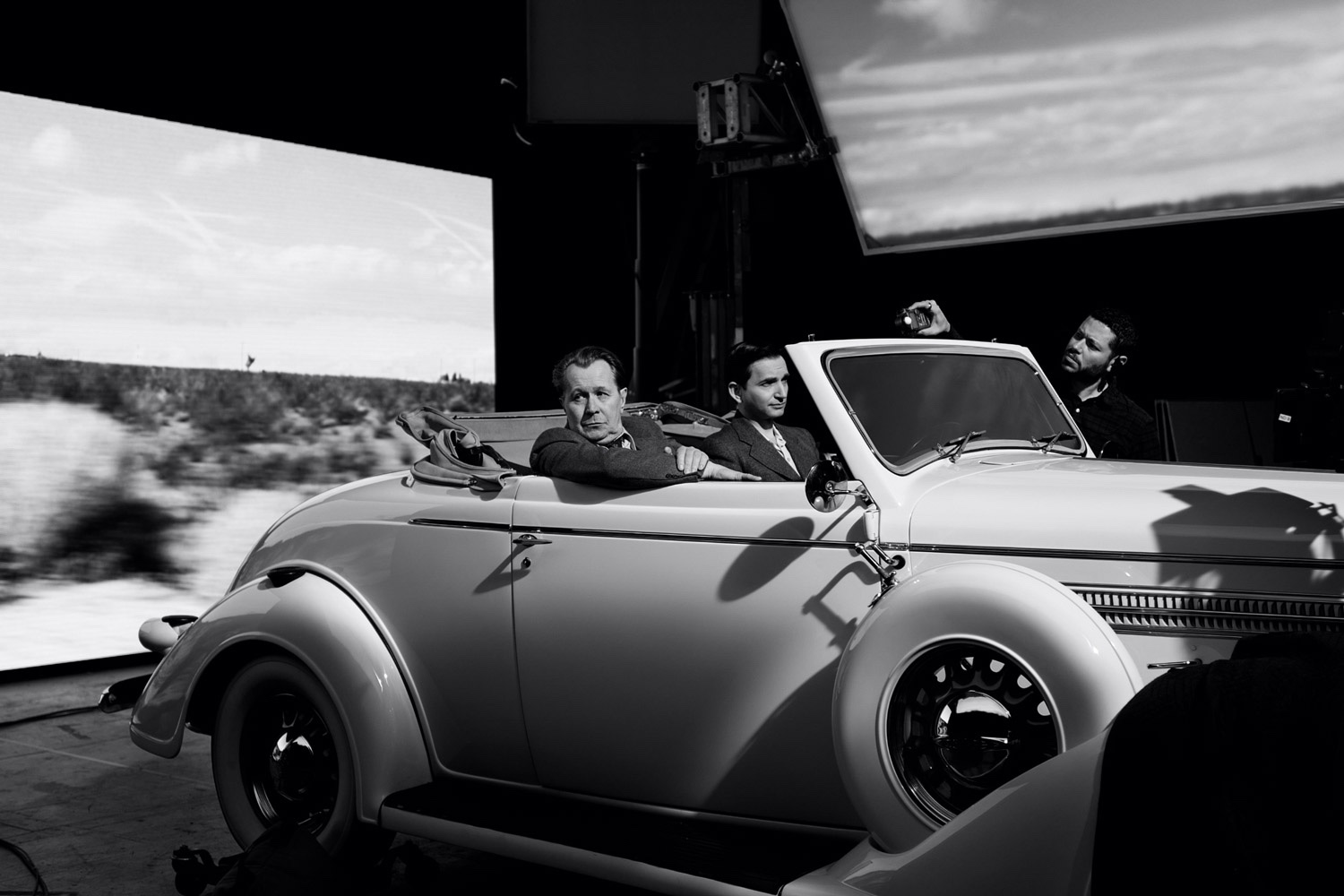 Oldman and Sean Persaud on set

The list of directors you’ve worked with is incredible: Christopher Nolan, Francis Ford Coppola, Steven Soderbergh, Alfonso Cuarón, Oliver Stone, Tony Scott, Joe Wright . . . How was it to work with David Fincher?
GO: From the get-go there was a very specific vision, an idea behind the film. In that respect, it’s like riding in a Rolls-Royce or sitting in first class. The captain up there in the cockpit has flown thousands of hours. You sit back and relax and think, Well, this guy knows what he’s doing. I’ll tell you what did surprise me. David, as we know, is such a visualist, with the framing, the composition of the shots, the lighting, and of course this incredible soundscape that he’s put together. I could imagine that David was going to really nail the period and do something extraordinary with it, but the thing that surprised me was the work that we did on the text in rehearsal — analyzing every scene, sometimes going over just a word. What’s the motivation here? What does Mank want from the scene? What does Marion want from him here? We did a deep dive into the text, the characters, what we’re saying, and whether the story makes sense. 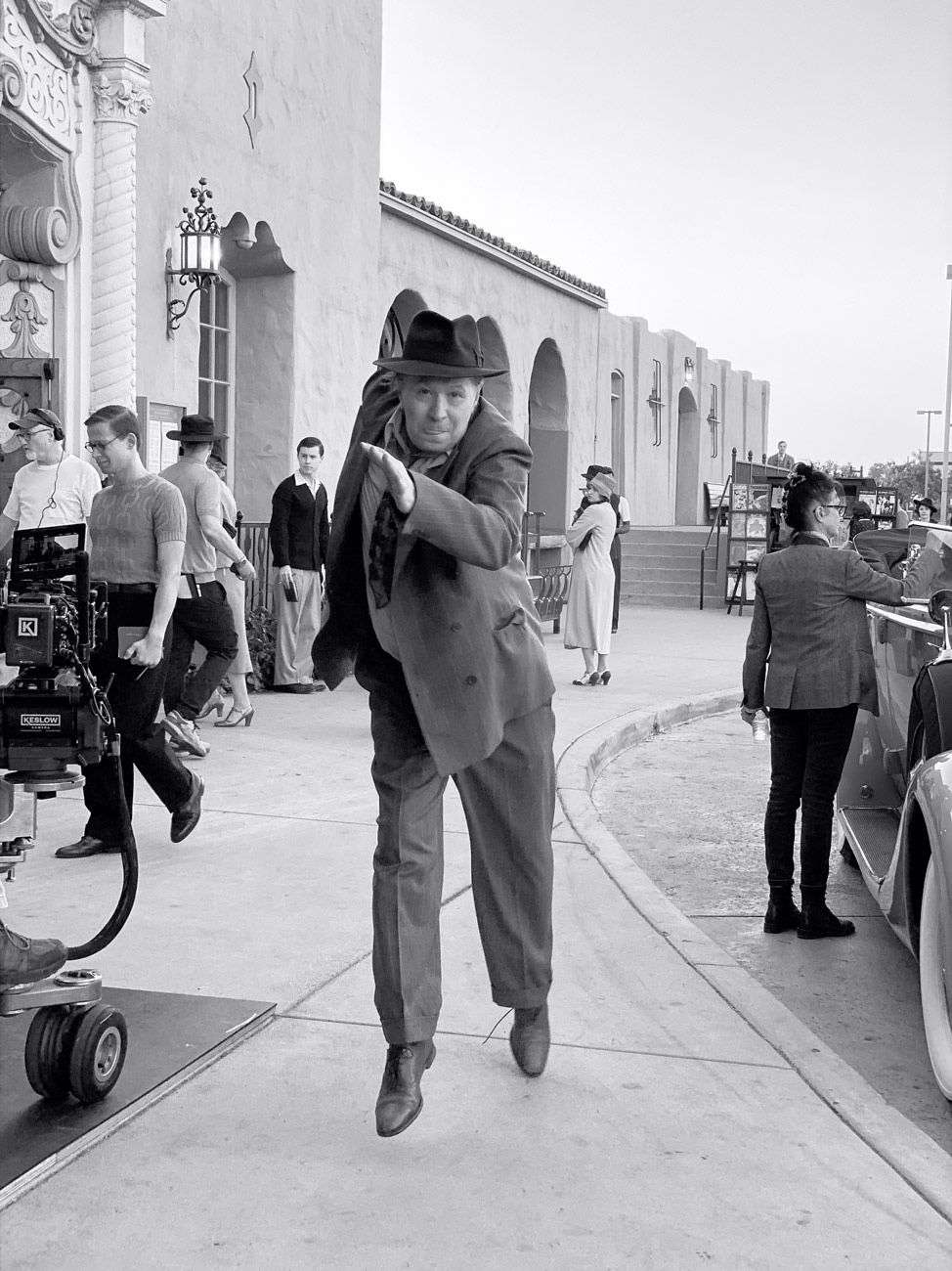 Oldman gives Mank a run for his money

Fincher is Fincher. There’s a reason why he goes by one name, like Coppola, like Soderbergh.
GO: The wonderful thing about having the opportunity to do as many takes as he does is you really start to live in the world. I’ve always thought it was crazy that a production would spend millions of dollars on an elaborate set, thousands of dollars on costume, and then we’d get there in front of the camera and we’d have two or three takes and move on. I understand that there are budgetary reasons why you can’t just do endless takes, but sometimes when you look around at these sets and these costumes, you think, My word, look at the props, look at the clothes! This is marvelous! and then you get two bites of the apple, and you’re moving on. With David, you really get a chance to live in the moment and explore that more than you would in other films. 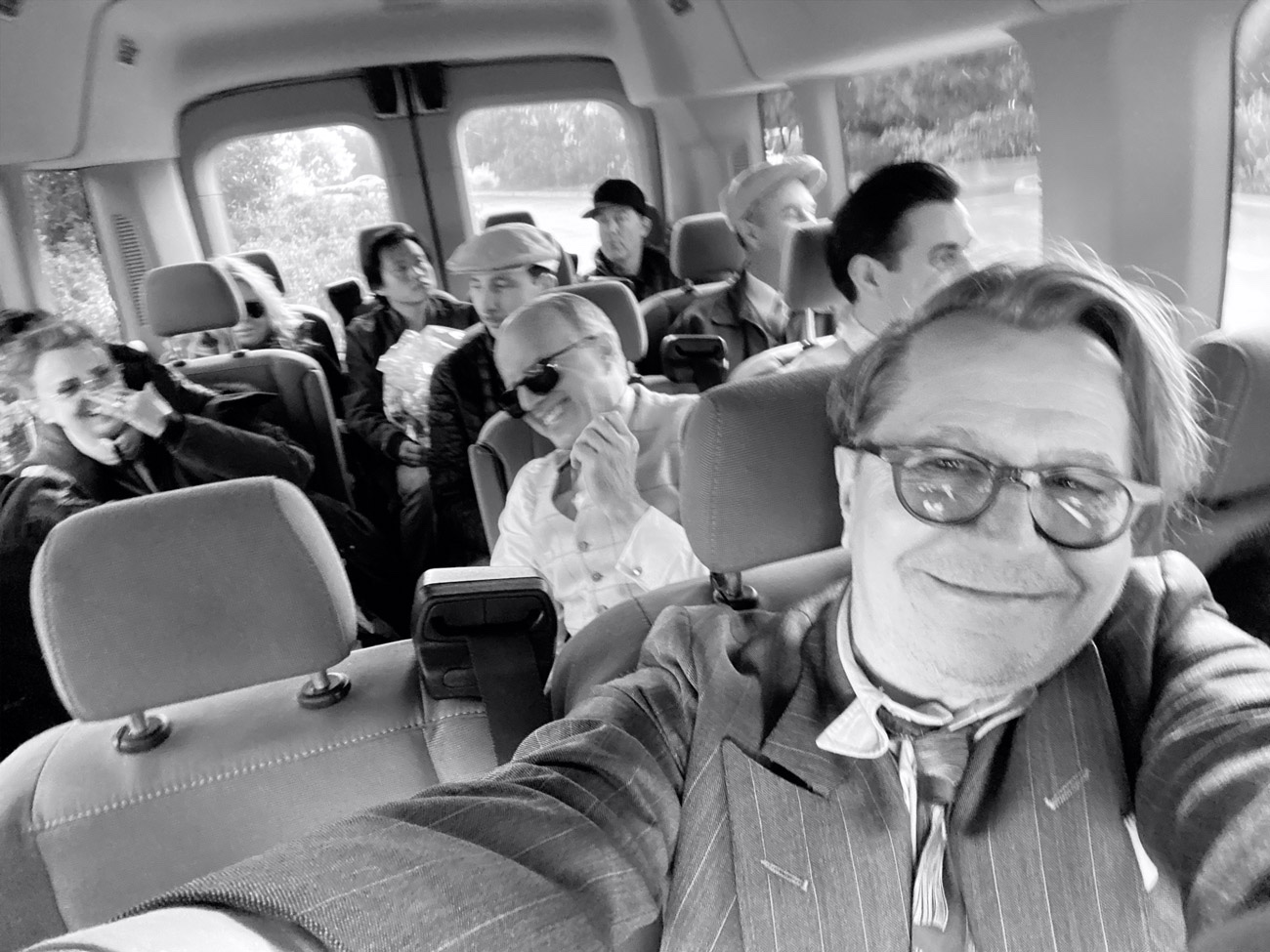 Oldman, cast, and crew behind the scenes

Everybody loves to talk about their favorite Gary Oldman characters. George Smiley was unbelievable in Tinker Tailor Soldier Spy. JFK and True Romance are perfection. Then there’s Sid and Nancy, Bram Stoker’s Dracula, and, of course, Darkest Hour, for which you won the Oscar. Is there a character that you look back on and think, God, that was fun?
GO: Well, Churchill was a wonderful experience, and I don’t say that just because it all ended in a gold statue. Meeting the Churchill family, digging in and reading, watching all that footage, having private, behind-the-velvet-rope tours of all these wonderful places — I feel very privileged to have done that.

Funny enough, a character I love was in a little movie I did called Nobody’s Baby. It was a comedic role. I play this character Buford. You mentioned some good ones there, and then there are probably a few I would like to go back and reshoot. I think a lot of people feel that, whether they sculpt or paint or write songs. See, it’s not so much about the finished result. I had a great time working on Mank, and I’m very proud to have been a part of it, but I look back at my career sometimes, and it’s just about the experience. Having the experience of coming to work every day and working with these incredible people, that’s what I take away.