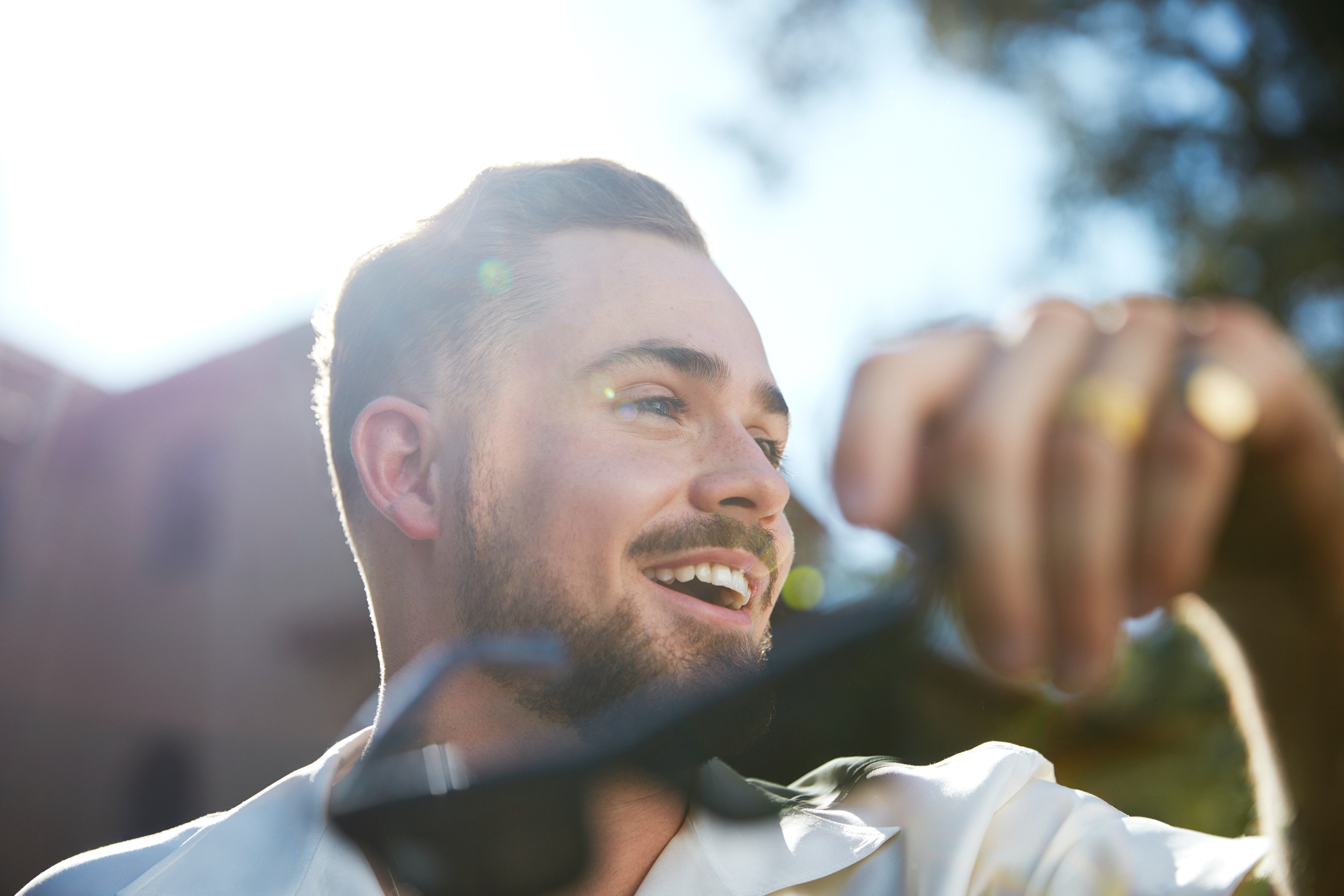 The Stranger Things actor talks shop with a familiar friend.

Stranger Things was never the same after Billy Hargrove blazed into the Hawkins High School parking lot in his blue Camaro. The bad boy had all the hallmarks of a 1984 hard-rock god: denim jacket, single earring, killer bod, wicked grin, and obviously, one glorious mullet. But wrapped up in that seductive package was a deeply damaged soul consumed by violence and rage. And that was before he was possessed by a malevolent supernatural force from another dimension.

You can thank Dacre Montgomery for imbuing Billy with his sinister charisma, his gleeful menace, and his anguished heart. The Australian actor famously won the role thanks to a rollicking audition tape that saw him gyrating in a G-string to Duran Duran. Montgomery made an impression, and when it came time for Stranger Things creators Matt and Ross Duffer to formulate the hit series’ third season, they put Billy at the center of it all. The Duffer brothers crafted a storyline in which Billy becomes an instrument of the monster who rules the parallel dimension known as the Upside Down. The possessed teen lures townspeople to an abandoned steel mill where they’re served up to create an army under the creature’s control. In the end, it’s series protagonist Eleven (Millie Bobby Brown) who helps Billy find a way back to his own humanity. He chooses to sacrifice himself as a final redemptive act, telling his stepsister with his last breath, “I’m sorry.” It’s rare to find a character arc quite so meaty, and Montgomery relished the challenge of taking Billy from aggressive bully to contrite martyr. He arrived on set hours ahead of schedule to prepare for filming, and he pushed himself to his physical limits for some of the season’s most demanding scenes, including a thrilling sauna-set confrontation with Eleven. With Hawkins now in the rearview mirror, Montgomery is squarely focused on life after Stranger Things. He recently wrote and directed his first short film, and he’ll star in the upcoming romantic comedy The Broken Hearts Gallery. Here, Montgomery chats with his close friend actor Austin Butler (who will play Elvis Presley in an upcoming biopic by Baz Luhrmann) about the Stranger Things phenomenon and what’s next.

Austin Butler: I was reading about where you started. You went to Western Australian Academy of Performing Arts [WAAPA]. What was that experience like?
Dacre Montgomery: In the 90s, my mom did broadcasting at WAAPA, and my dad had done a bit of lecturing in the sound department there. I was just fascinated by it. My high school was on the same campus, so every day I had to walk through this renowned drama school. I’m not going to lie to you: I think there are a lot of ups and downs about drama school. The first year, I got asked to leave the course three times.

Why was that?
DM: I had spent so long manifesting this idea that I wanted to go to drama school, and once I was there, I was maybe a little bit arrogant. I didn’t want to learn Feldenkrais, I didn’t want to learn these multiple vocal techniques. There was a lot of stuff going on in my life: I got fired from my job, my girlfriend and I went on a break — all this stuff happened at the end of first year. The staff said, “Look, if you want to come back here after the summer, you’ve got to think long and hard about what you’re capable of.” So I thought long and hard, and I came back, and we had our first public plays, and it was amazing. We did The Grapes of Wrath, Measure for Measure, a couple of contemporary plays — Punk Rock, The Golden Age. I loved it. I booked my first professional role on my 21st birthday. That was two weeks before I finished WAAPA.
“

. . . I’ll come to set eight hours before call, and I’ll just pace the soundstage for hours, get in the world.

Do you see yourself doing theater in the future?
DM: Yeah. In film and television, you rarely have the time to rock up on set and extrapolate on the character, the world, the ideas presented, or the meaning behind the story with the director and the other actors. That’s what I like about theater. I just struggle with nerves; I always have. That’s why I find it hard to audition in person. Theater, for me . . . Even if we’re two weeks into a production and we’ve been performing to live audiences for two weeks, I’ll drill the whole play’s worth of lines about five times before I start every single night. It’s quite a draining experience, but amazing. I love the live component.

Do you bring your work home with you?
DM: No. Once I’ve left set, I’m gone. There are some pretty intense moments with Billy in Stranger Things, and I can’t leave with the character, so I’ll come to set eight hours before call, and I’ll just pace the soundstage for hours, get in the world. No one else is around me. Then when I walk on set, there’s no prep.

Are there any rituals that you have before the cameras start rolling?
DM: There’s a lot of, I don’t know, trying to channel something — like I’ll go into a bathroom on the soundstage and scream until my voice is gone. It depends on the scene, but it’s quite a manic exploration. I read that it was your idea to have Billy’s feelings about his relationship with his mother play a role in the storyline. Is that true?
DM: Yeah. There was a lot of talk about his father in Season 2, and about the effect that he’d had on him and how he’d entered his psyche. So I had decided that I wanted to talk about his mother for Season 3. I came up with this idea that I had heard from my own mother, about a woman who was a 35-year-old virgin who’d given birth through I.V.F. and Cesarean section to a baby boy. I had this idea that maybe that had happened at Billy’s birth. I ended up making my first short film about that, but essentially, I brought the idea to the Duffer brothers, and they said, “Well, we would really like to see some sort of biological mother component.” Ultimately in Season 3, we see the end of Billy’s story arc take a redemptive turn. What brings Billy to the surface is his mother. Do you see yourself getting behind the camera a lot more?
DM: I love acting, but I also love development. I love building worlds. I’m trying to develop a scripted story at the moment. I’m just wanting to explore the business side, the development side, creating aesthetics. But ultimately, acting, that’s the bedrock. You’re lucky in this industry if you have the time, the financial means, and the passion to explore other avenues. The more people you meet, the more people you get to work with. Those are opportunities to expand your horizons.

Are there actors that you look to for inspiration?
DM: I’ve spoken a little bit about Jack Nicholson over the years in relation to Billy, purely because I don’t think his choices are predictable. He has a way of playing this maniacal kind of antagonist, but humanizing him as well. That was very much my mission in Season 2. There are some amazing actors out there . . . I just watched Warrior for the first time, and Tom Hardy, he’s one of those actors that is quite unpredictable. Benicio del Toro in Escape at Dannemora . . . Adam Sandler killed it in Uncut Gems. I love Brad Pitt, and for some reason I had a real cathartic experience with him trying to find his father in Ad Astra. That really moved me. I admire him deeply.

Did you get to do a lot of your own stunts this season? Did you enjoy it?
DM: Dude, I live for it. I threw my head through that little door in the sauna. I smashed glass — I went straight through. I’ve learned a lot of things along the way. Getting out of a burning car with only a tank top on at three o’clock in the morning and it’s minus five degrees — I love that stuff.
“

What was it like to be a part of a series that has had such a huge cultural impact? Was it difficult to say goodbye?
DM: I think to be part of something culturally so massive was great, because the antithesis to that was there was no pressure ever. You were unburdened by this cultural expectation, and you just got to rock up on set and play. The second part of that is that you feel it in your personal life. It’s like having a movie hit the cinema: It’s a rumble that becomes a roar very quickly afterward, and remains very intense for three months of time. Then you get spat out the other side. I actually found I didn’t have any apprehension about what the future held. I remember the last night we shot, having this moment of “Let’s shed the skin.” I felt like the luckiest guy on earth, I felt like I got to explore. I had the best time ever, and I’m going to miss all the people — but the experience, I put to bed that night. Part of life is learning to continue to grow and evolve. When I was a kid, I was so scared of doing that. This was a nice moment because I felt like it did come to an end. I was excited for the future, as clichéd as that sounds.