The documentarians behind Athlete A ask Aaron Sorkin how he honors the truth in filmmaking.

As documentary filmmakers, we consider our films to be only as solid as the facts on which they are based. In many ways, our latest film, Athlete A, is a celebration of those whose life’s work is to pursue truth and facts. The film tells the story of the tireless investigative reporters, law enforcement officers, and prosecutors who, together with the brave gymnasts from U.S.A. Gymnastics, sent the sexual predator Larry Nassar to prison and exposed a decades-long culture of abuse.

In an age in which we witness regular verbal attacks and physical threats against reporters, this story reminds us of the immeasurable value of investigative journalism. Athlete A pieces together events that occurred over the course of two years, and places those events in a history going back to the 1970s. Facts are our raw materials, but as filmmakers it is also our job to create a dramatic arc, present memorable characters, tease out human emotion, and ultimately build a bridge between the story and the audience. There are few current filmmakers more adept at these practices than writer-director Aaron Sorkin. We count ourselves among Sorkin’s legions of fans who, prior to the “binging” era, waited impatiently every week for the next episode of The West Wing. In recent years, Sorkin has fashioned emotionally gripping movies grounded in history, including The Social Network, Moneyball, and Molly’s Game. His latest film, The Trial of the Chicago 7, is a sharp recreation of events surrounding the protests that took place at the time of the 1968 Democratic National Convention in Chicago. To make the film, he relied on court transcripts and news media from the period. But the film is not purely factual; it is quintessential Sorkin: full of heart, passion, and snappy dialogue. In many ways, The Trial of the Chicago 7 provides a warning and a guide for the times we are living in now.In a conversation hosted at SFFILM Awards Night, we had the opportunity to speak to Sorkin about how he chooses to adapt historical truths and events into compelling narrative films. We practice a different but related craft to his, and it was thrilling to get some insight into his creative process. 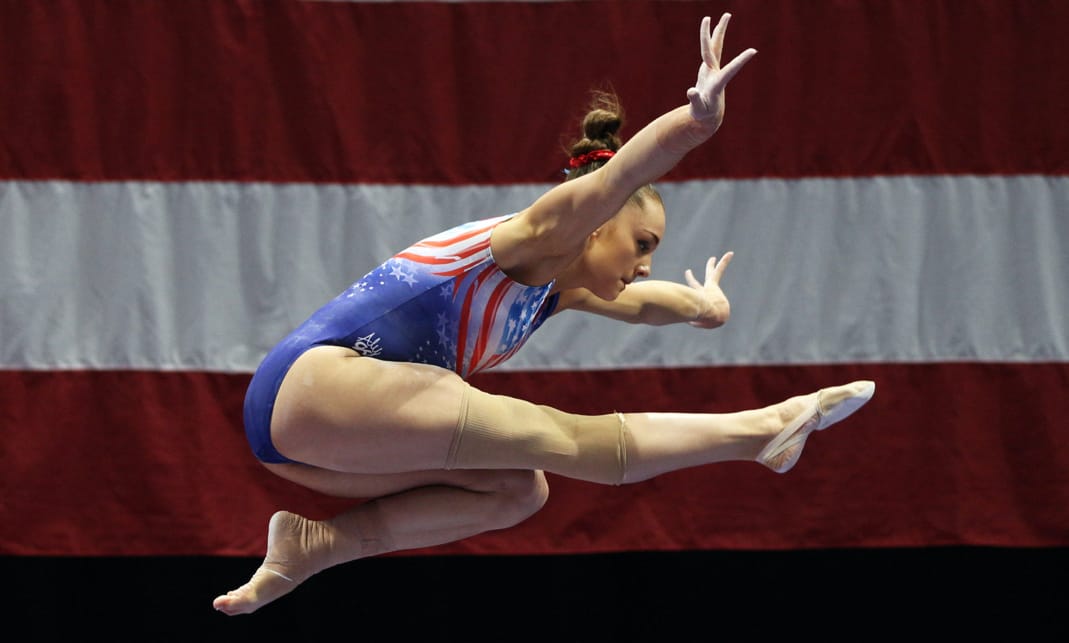 Gymnast Maggie Nichols in Athlete A

Jon Shenk: For us, we’re fact-checkers, everything that goes in our films has to be triple checked. You work with nonfiction, but you do take liberties. We’re curious to hear about your process, especially on this latest film, and about how you know when you can move away from reality and when you have to stick to it.

Aaron Sorkin: Well, you’re right that there’s a difference between a documentary and what I do. There’s a difference between journalism and a feature film. But the way I think of it is that it’s not a photograph, it’s a painting. What does that mean in real terms? I wouldn’t do anything to pervert history, I wouldn’t do anything to defame someone. Maybe it’d be helpful if I gave you an example of what I would do, what I did do.Bobby Seale was famously, tragically bound and gagged in the courtroom during the trial of the Chicago 7. In reality, he was bound and gagged for several days and not the five minutes that I have him bound and gagged in the film. So why did I do that? Because the impact had been made. Ultimately, the prosecutor, Richard Schultz, was going to ask him to be separated, to have that mistrial declared. The drama should happen then. That should be the beat. Sometimes the answer “Just because it happened that way” isn’t good enough. 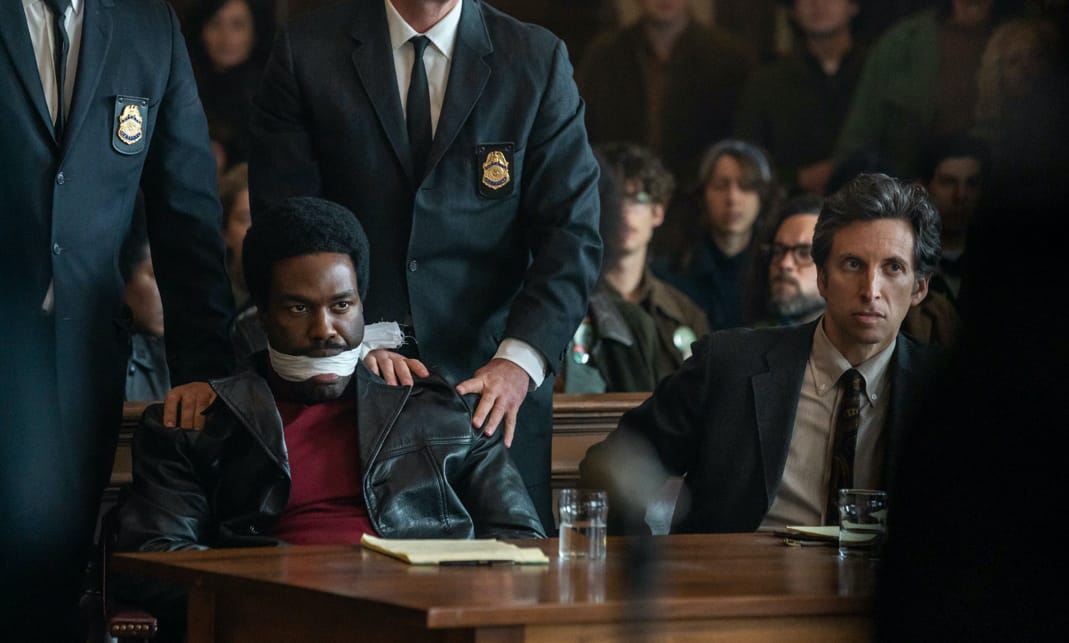 Bobby Seale, played by Yahya Abdul-Mateen II, in The Trial of the Chicago 7

I’ll try another example from another movie, The Social Network. I start the film off with a scene between Mark Zuckerberg and another student, two college kids on a bad date, the last date they’re going to have. I imagined that whole thing, but my basis for imagining it was the second scene, where Mark begins blogging about a girl he calls a bitch. I had his blog, and he tells us that he’s drunk in this blog. He’s getting drunk and he creates this hot-or-not website, Facemash, which would ultimately become Facebook. So first of all, I wanted to imagine the scene that came right before that, that prompted him to get so angry at this girl and start the hot-or-not website. That scene was based on stuff I did know about Mark Zuckerberg — that he was kind of obsessed with getting into a “final club” and that he wasn’t the smoothest guy in the world. I felt fine making up that scene.

But with that second scene, what I had scripted was that he’s on his computer, he sets down a glass with ice cubes in it, then vodka goes over the ice, orange juice goes over that. About two weeks before we started shooting, we found out that he was drinking beer that night. In fact, it was Beck’s. And David Fincher, the director, said, “Aaron, we’ve got to change it to beer.” And I begged David, “Don’t.” Making the screwdriver is much more cinematic, it’s just more visually interesting than popping open a beer. And making yourself vodka and orange juice reads as, I’m drinking to get drunk, whereas a beer can just be, I’m a college kid and it’s hot outside. By the way, Fincher got his way, it was a beer. But the reason I stood by my side was I did not think we were perverting the important truth.
“

I felt that was sacred ground. I didn’t want to mess with that.

So those are the kinds of things I’m willing to play with. Now I mentioned Bobby Seale a moment ago, so I should say that the exchange between Bobby and the judge that led to him being bound and gagged, and, in fact, all the exchanges between Bobby and the judge, are directly from the transcript. I felt that was sacred ground. I didn’t want to mess with that. But as a dramatist, I also knew when it was the end of Bobby’s story.

Bonni Cohen: So there are sacred elements, there are places where you draw a line because there’s a sanctity.AS: Yes. You know, William Goldman took me under his wing shortly after I got out of college. And even though he died a few years ago, I feel like he’s still a teacher of mine. He writes in Adventures in the Screen Trade about his experience writing All the President’s Men and how Carl Bernstein, of all people, invented a scene that never happened and wanted it in the screenplay. Bill Goldman says in this book that if you’re writing the story, the true story of the downfall of the president of the United States, the last thing you’re going to do is make anything up. It matters what story you’re telling.JS: Well, thank you for discussing that. It’s fun to hear you talk about your work, and congratulations on The Trial of the Chicago 7.AS: Frankly, I wish we had longer to talk about it, especially with two documentarians of your caliber.BC: We’re available from now until vaccine day. Anytime you’d like to tune in, we’ll be here for you.AS: O.K. I will buy the beer. Or the vodka.

Watch Athlete A
on Netflix now.

Watch The Trial of the Chicago 7
on Netflix now.