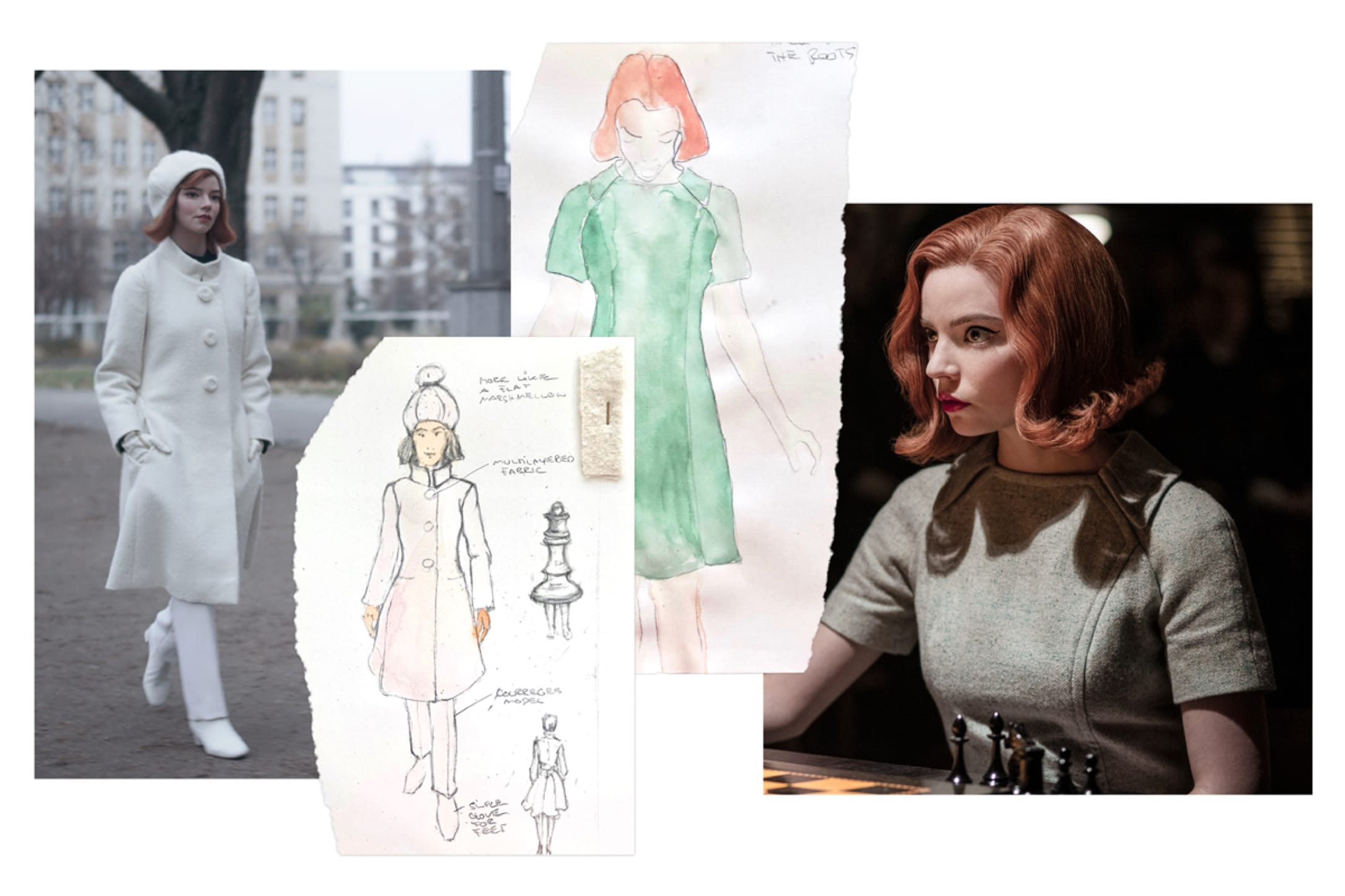 The cerebral and the sartorial find harmony in The Queen’s Gambit, in the form of the series’ impeccably turned-out protagonist, Beth Harmon. For every stroke of genius that the chess prodigy displays on the board, she also leaves everyone guessing as to her next fashion move. Playing Beth, actor Anya Taylor-Joy embodies the 60s from Hepburn chic to Twiggy mod.

“It seemed very normal to me that Beth would care about her clothes,” Taylor-Joy says. “She’s an aesthetic person, and the first thing she falls in love with is the board itself.”Behind the scenes, a creative synergy developed between Taylor-Joy and costume designer Gabriele Binder. “We fell in love pretty immediately and realized we have a similar way of working,” remembers Taylor-Joy. Adds Binder: “Everybody gave ideas, and the ideas grew. It was really artistic freedom to work with Anya.”Binder wove symbolism into each of Beth’s looks. Her outfits give subtle nods to the chess board — in the form of plaid prints or sharp lines, for instance. And by combining the costume designer’s visual references with the actor’s understanding of Beth’s state of mind, the two tailored a wardrobe to mirror the character’s journey.They decided from the outset to celebrate Beth’s empowerment through her clothes. Her style becomes bolder with each fresh win in every new city. “She grows with every place she travels,” Binder explains. “She tries out new colors in Mexico, for example, that she never would find in her hometown of Lexington, Kentucky. She tries out new forms in New York. And she becomes more fashionable in Paris, of course.”As Beth ascends the ranks of the male-dominated chess world, she delights in buying herself the finer things. But she never deploys her style to please or to appease. “Beth doesn’t dress for other people; Beth really dresses for herself,” Taylor-Joy reflects. “You’re watching her personality evolve, rather than watching her attempt to satiate society with whatever she’s wearing.”It’s a bold but crucial gambit. “Beth needs something decisive,” Binder says. “Chess is always yes or no, win or lose. There is no ‘perhaps’ in chess.” 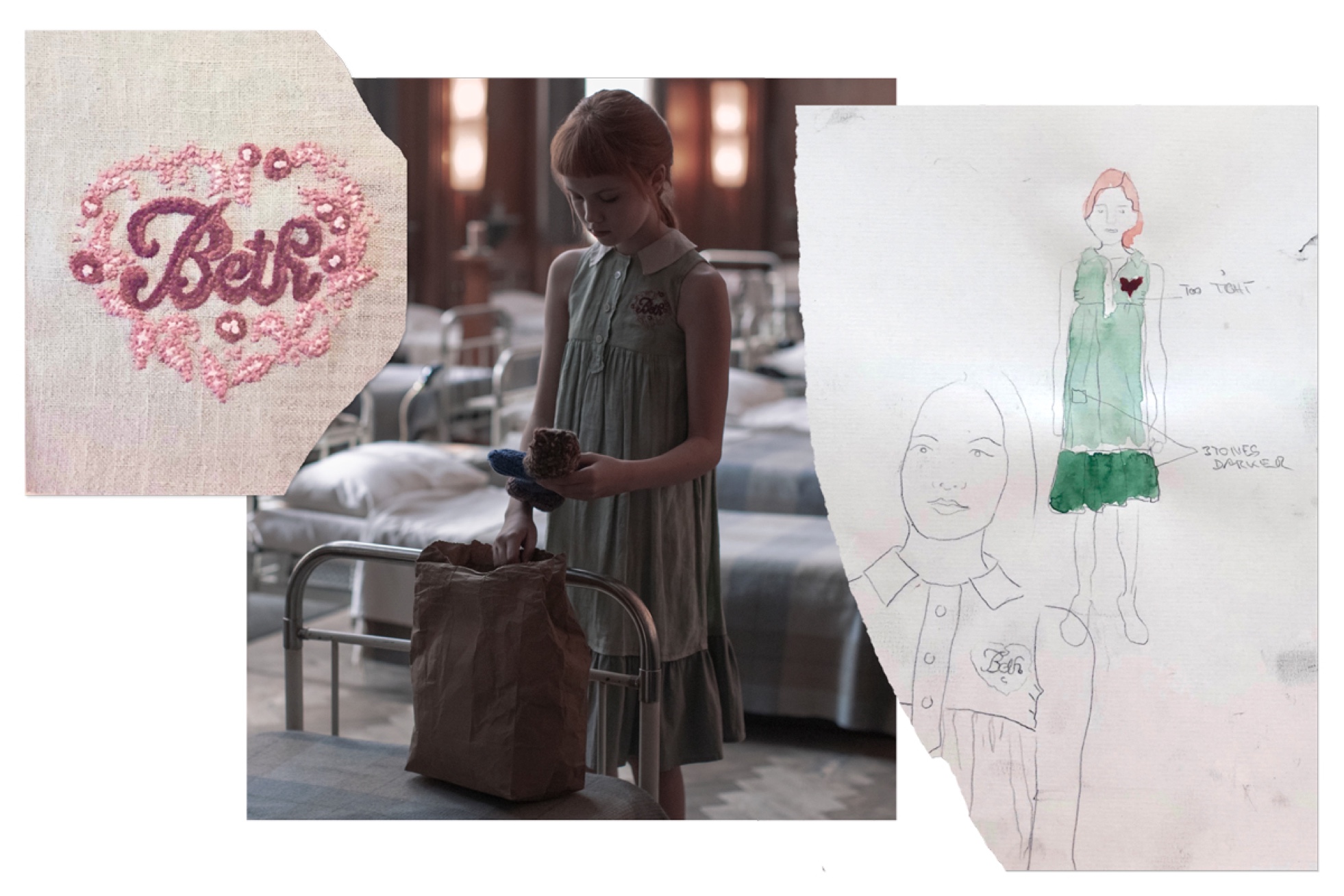 Beth’s late mother embroidered a green linen dress for her, but it’s taken away when Beth arrives at the orphanage. For the next several years, she progresses through a series of simple pinafores. Her clothes are drab and functional. She has no say in her first two outfits: a school uniform and, later, a dowdy frock that her adoptive mother buys for her at the department store Ben Snyder’s.

Beth soon returns to Snyder’s — now with her first-ever chess winnings in hand. While she makes a beeline to buy a new board, a dress also catches her eye. “Even the first dress that Beth buys for herself is a pinafore dress,” says Binder. “But it’s much more female and grown up. She goes step by step away from pinafore dresses.” This outfit also marks the beginning of Beth’s infatuation with checked prints. 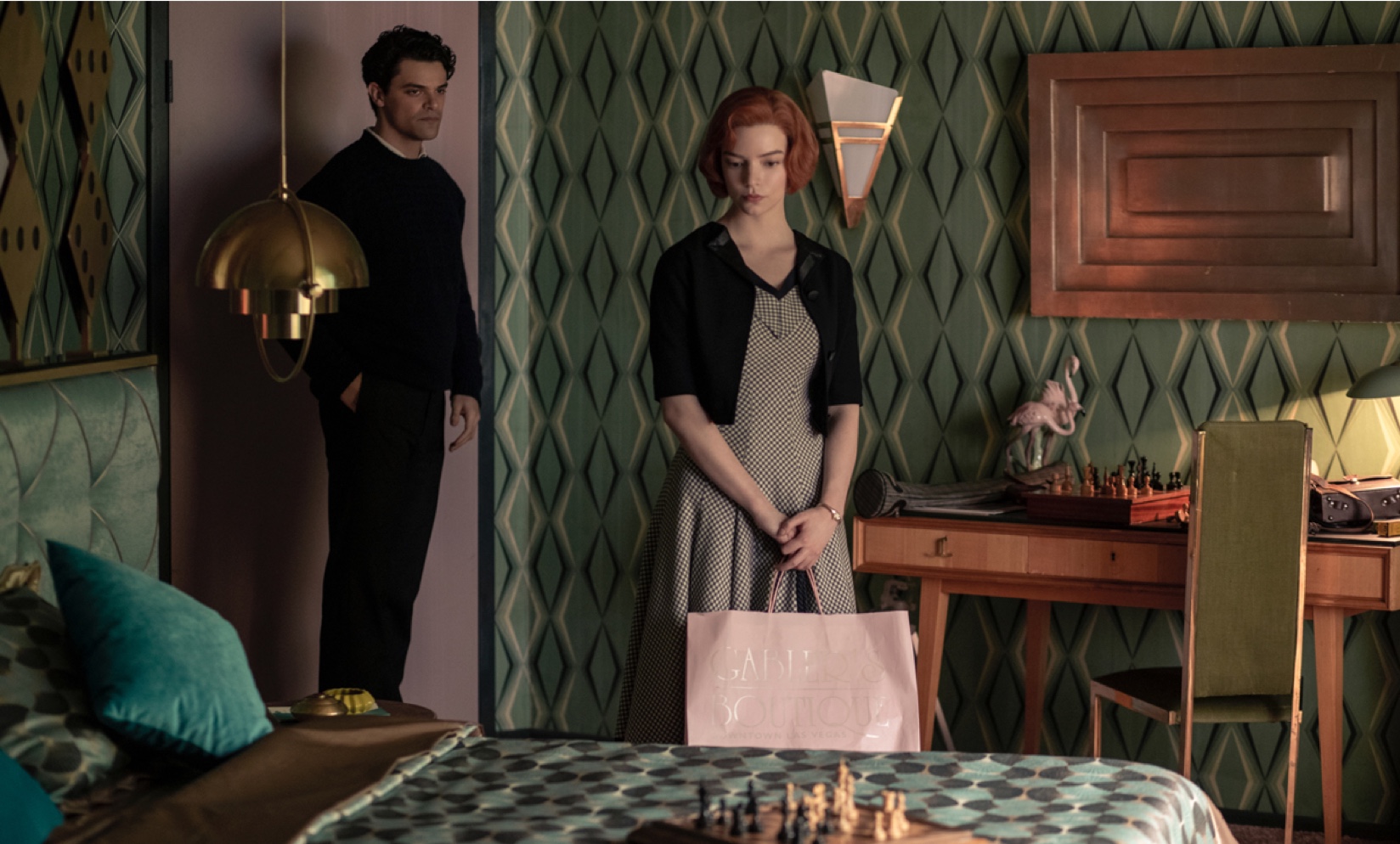 Beth arrives at the U.S. Open in Las Vegas just as she’s coming into her own. Binder dressed Taylor-Joy in a checkered dress and black bolero for a scene in which she runs into her unrequited love, D.L. Townes, at the hotel. “This is the first time she realizes she is a woman and she likes to be a woman,” Binder explains. “This is an important step in her growing up and experiencing herself and enjoying herself.”

Beth’s shoes also trace her relationship to femininity. “First she has these very heavy, clumsy shoes that I think helped her walk younger, more heavily, and not so connected with herself,” Binder says. “Later on, when she realizes she has feminine power, we go to ballerina and slide shoes.” 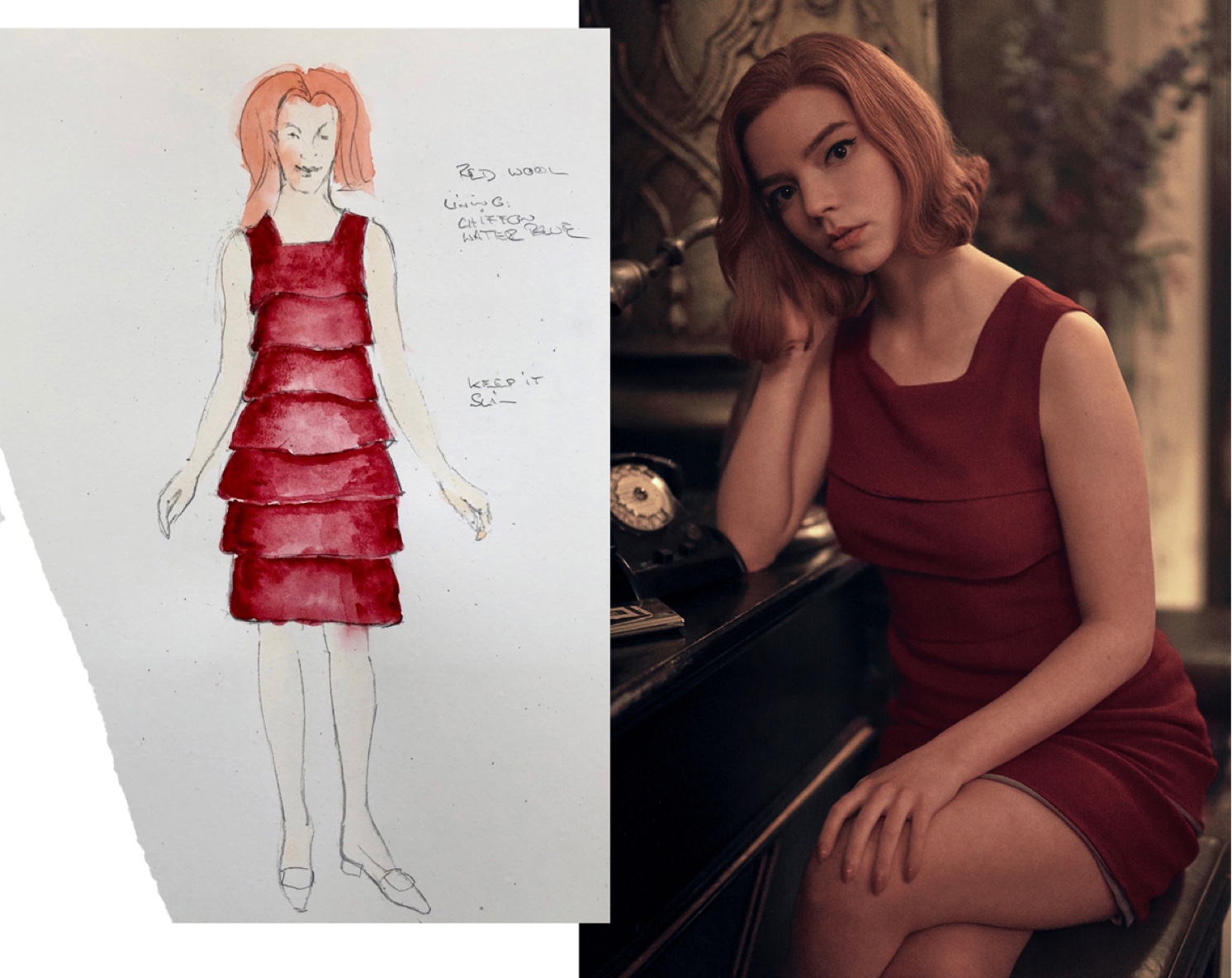 Perhaps the most challenging look to get just right was one of the spoils from Beth’s Parisian shopping spree: a crimson dress she wears for a night out, which winds up fully submerged in a bathtub — with Beth still inside. “I think the dress should bring two things,” Binder explains. “It should look really fantastic in the bar and it should be, on the next day, super miserable. It should turn around and be the opposite after it’s wet.” In the end, a crepe shift dress did the job, taking Beth from chic to soaked. 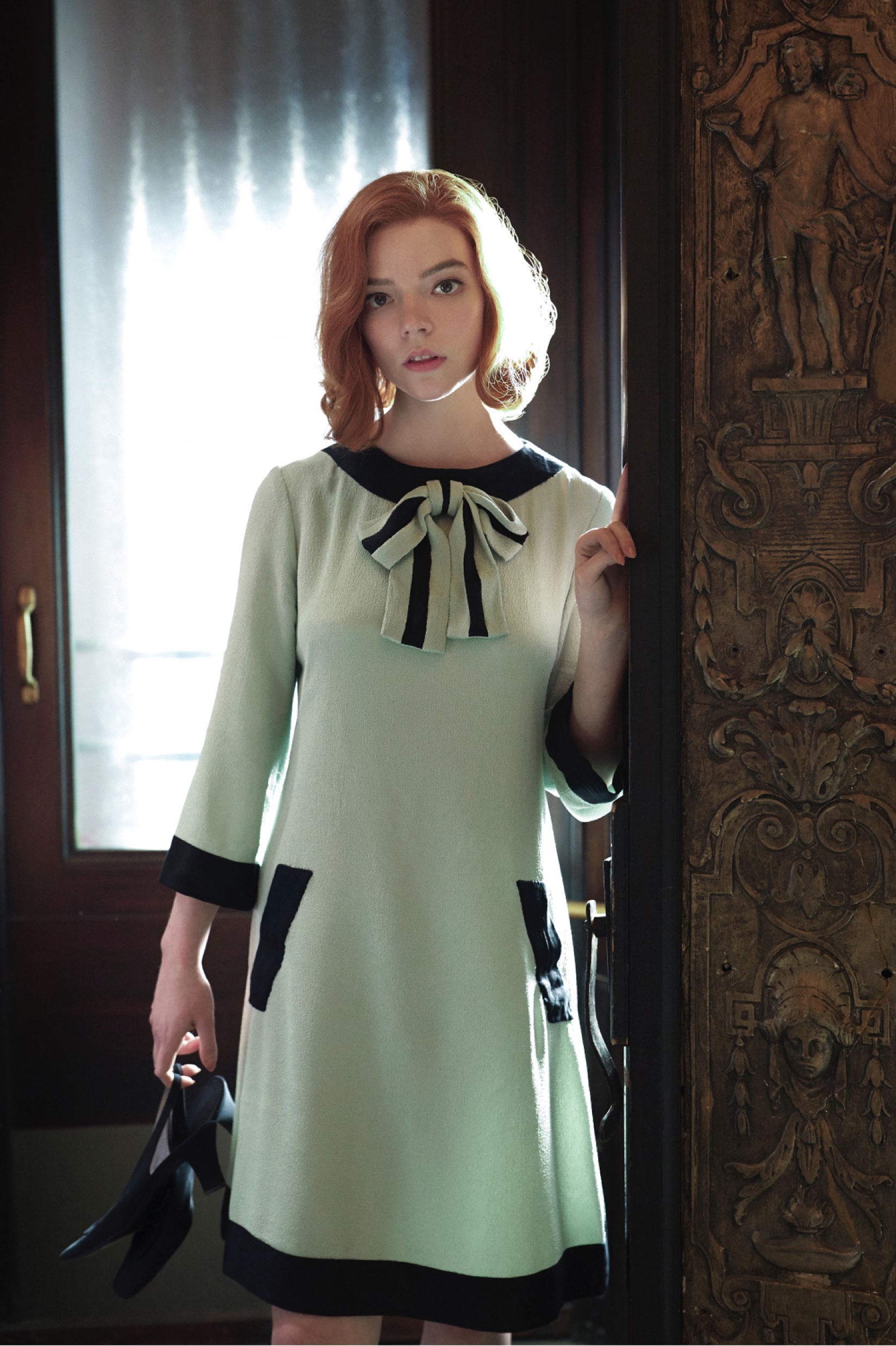 The Queen’s Gambit opens with vignettes of disarray: Beth passed out in the bathtub after a bender, in danger of missing the most important match of her life. She rushes to pull herself together, hastily donning a pill-green Pierre Cardin-inspired crepe dress with black trim and a floppy bow, and then swallowing some of the green tranquilizers she’s become dangerously dependent on.

The dress jumps off the screen as Beth bolts through the hotel to the tournament. It’s a far cry from some of her more structured looks. “The green dress, that was her moment of distraction and disorganization,” says Binder. “We needed a dress that’s a little bit jumpy on her when she's running. The bow is also something she wouldn’t normally use for chess, because it’s distracting. It was fun to make this dress and to see how it supports this moment.”“The first time I saw that dress in the opening of the show, I got chills all over my body,” Taylor-Joy recounts. “I just thought, It’s the green pills! It’s the color palette!” 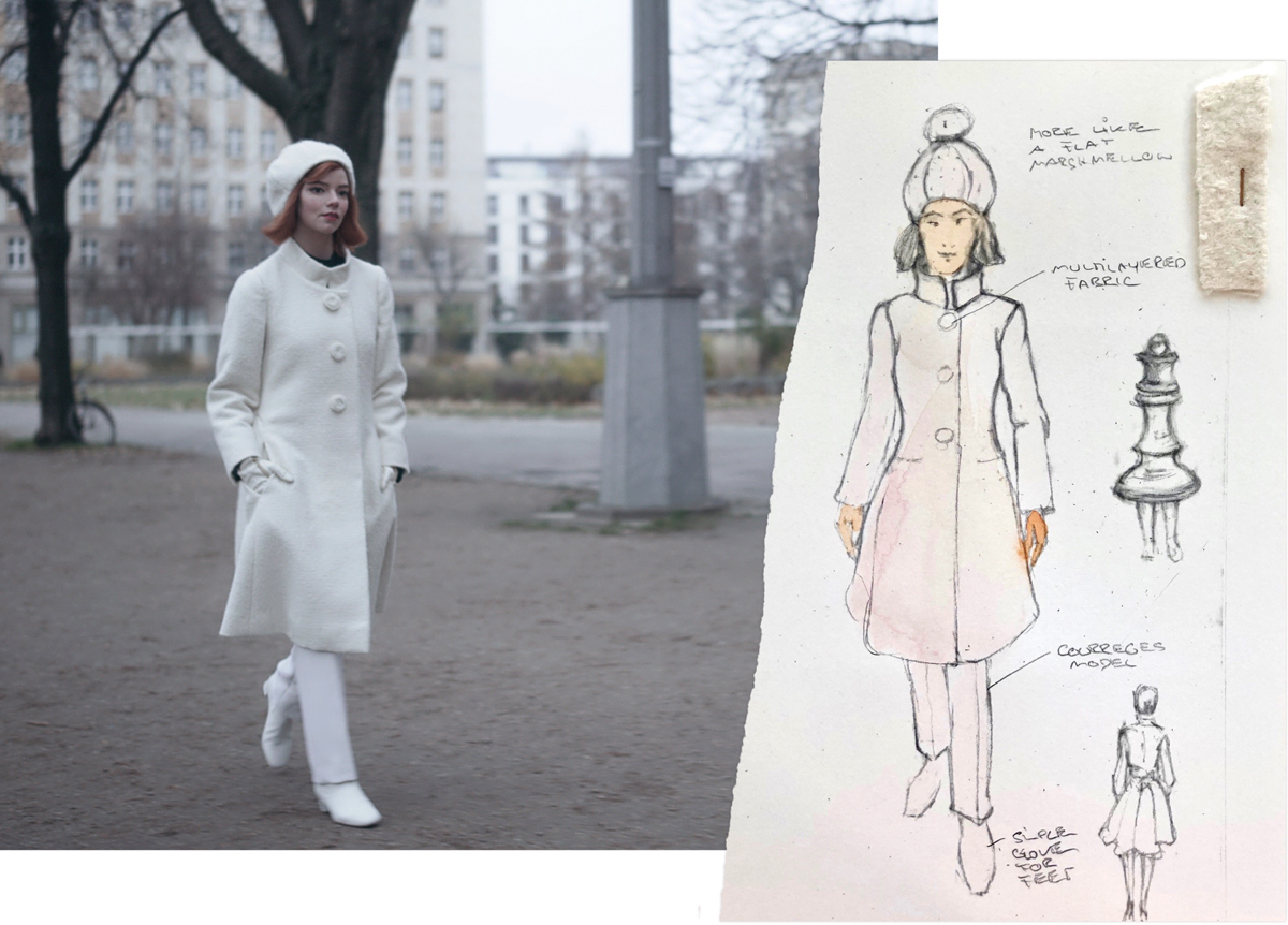 Beth closes the show at the world championship in Moscow, where her all-ivory ensemble in the final scene — white pants, shoes, gloves, and a cashmere hat and coat — reflect her success. “When I saw the location, I thought, Oh, my God — the white and black on the houses!” remembers Binder. “In this cubic way it looks like she’s walking inside a chess board. Now she must become a chess figure. But which one? The white queen, of course.”

The duo took care to steer away from camp or fantasy. “We didn’t want it to be too obvious,” says Taylor-Joy, explaining that both she and Binder contemplated ways to make the reference subtly, “without anybody being like, Why is she wearing a costume of a chess piece?” In the end, Binder wondered if perhaps the reference was a touch too subtle. “I thought maybe very few people would realize it’s a chess queen,” she says. “But that wasn’t too important, because it would be a feeling. Now, though, I’m very happy that many people have realized what it is and have written to me about it.”When production wrapped, Binder and series’ co-creator Scott Frank gifted Taylor-Joy the white wool cap. “It was so beautiful,” Taylor-Joy recalls. “I bawled like a baby when I was given that hat.”