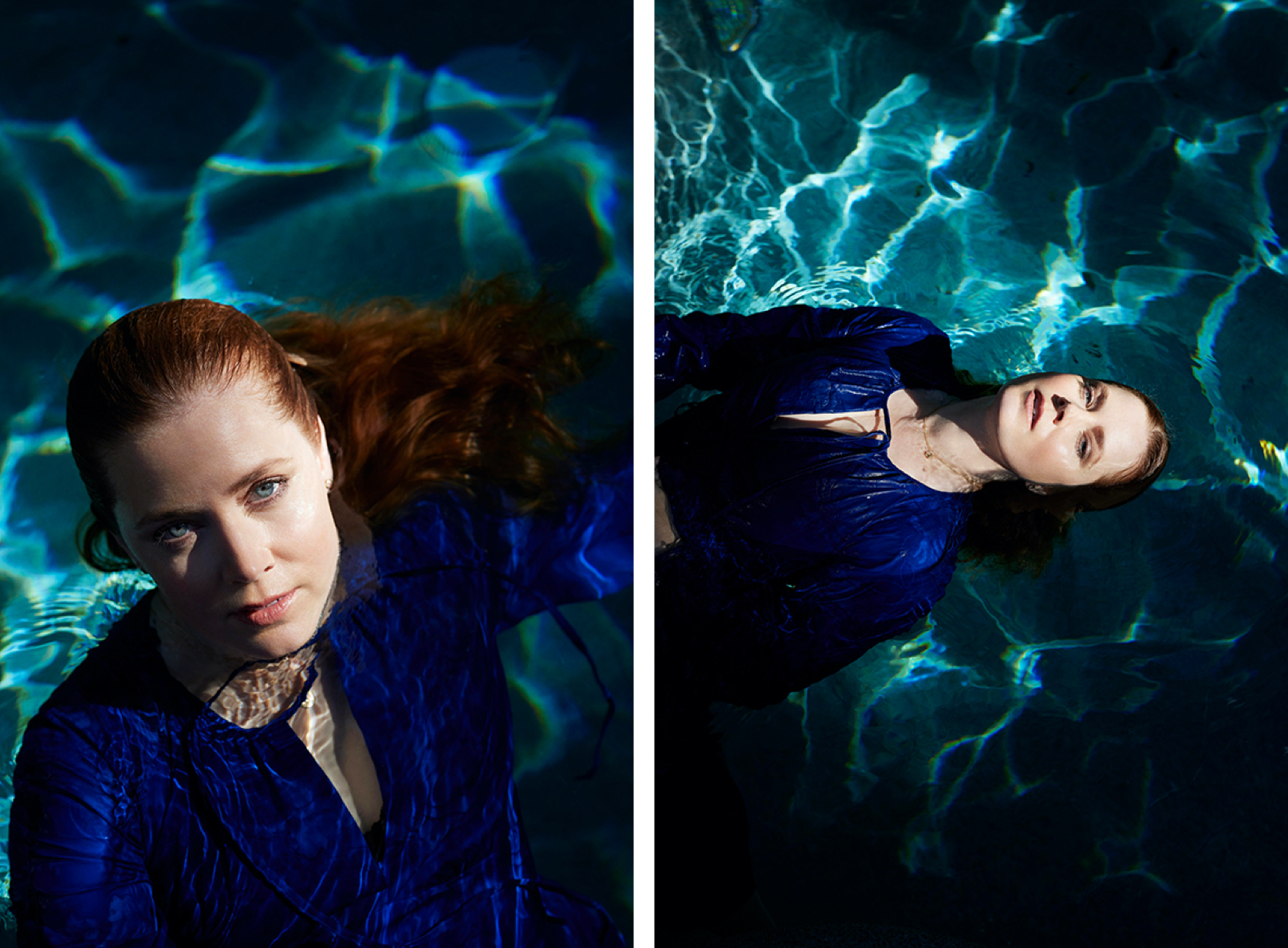 One of
a Kind

Amy Adams on her singular career and her latest role, in Ron Howard’s Hillbilly Elegy.

Few actors can stand shoulder to shoulder with Amy Adams. The six-time Academy Award nominee has delivered many extraordinary performances over the course of her career, from her breakout in the 2005 indie sensation Junebug, to her portrayal of Lynne Cheney in Adam McKay’s 2018 political biopic Vice. She’s captivated critics and audiences in Enchanted, Doubt, The Fighter, The Master, American Hustle, and Arrival — not to mention her striking turn in the Southern Gothic miniseries Sharp Objects, which she also produced.

Yet Adams remains grounded. She’s confident, committed to doing the work, but not necessarily Method. “I think sometimes the character comes with me a little bit more than I intend it to,” she says. “It seeps into my being a bit.”It’s true that she seems to effortlessly inhabit the roles she chooses, including her latest, starring opposite Glenn Close in Ron Howard’s Appalachia-set drama Hillbilly Elegy. The film is based on the best-selling memoir by J.D. Vance, and is adapted for the screen by Vanessa Taylor (The Shape of Water). Adams plays Vance’s mother, Bev, a career nurse and single parent struggling with substance abuse and the scars of extreme trauma.Her approach was shaped by time spent on set with the real-life Bev (who is now in recovery). “She’s very energetic and colorful and a big personality, ” Adams says. “I think her true desire was to be the best mother she could be, the best nurse she could be. And life got in the way.” 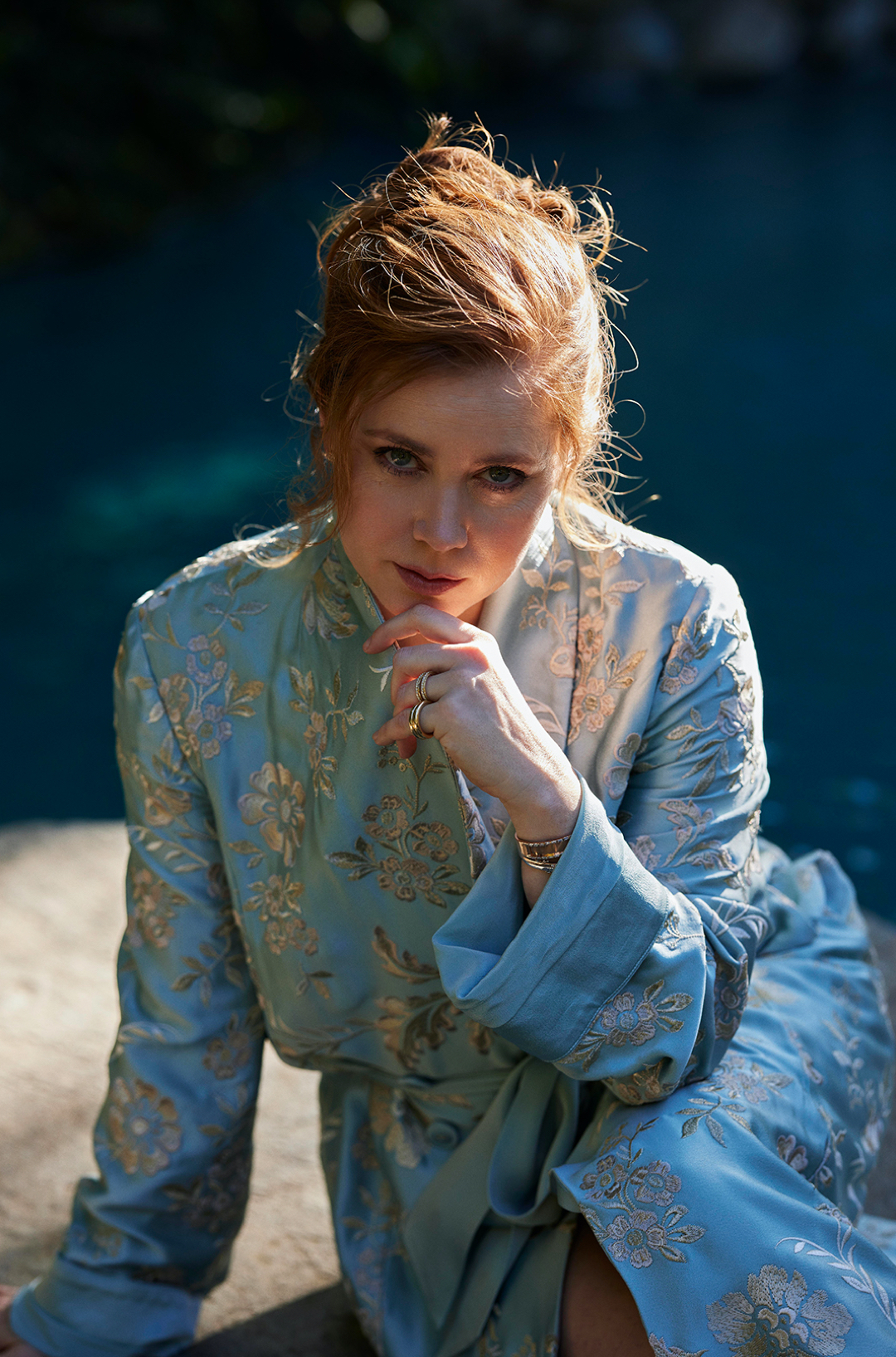 Krista Smith: You’ve played real-life figures previously in your career: Lynne Cheney in Vice, Charlene Fleming in The Fighter, among others. Do you feel an added sense of responsibility with these kinds of roles?
Amy Adams: I’m always sensitive in how I approach them. I never see my characters as good or bad. I try not to judge them. I’m trying to dive into the humanity and find the depth, the reasons behind who they are. I don’t want to talk about what I found; I want to keep that part of it between [us]. The tricky part is not wanting to use their story to further my narrative as an actress. But understanding that we’re approaching it with artistic license, that has to be tricky for them. It has to be hard. Charlene, I remember being like: “I didn’t swear that much, and I never wore fishnets to a fight.”

What grabbed you about the Hillbilly Elegy script when it came to you? What got you into the character? Was it the shoes, the hair, the denim?
AA: I was really fascinated with this family and their story. It’s interesting, because I have always worked from the inside out, meaning I need and value everything you can put on the character. But if I can’t find the character internally, nothing I put on is going to help me find it. So for me, it was getting to know the family, getting to see their interactions, understanding their love and passion for each other.Vanessa’s script really challenged us, because when we find Bev and Mamaw, often it’s inside of very traumatic moments for J.D. This is J.D.’s recollection and point of view, so it’s constantly living in a state of causing trauma to a child, in a way. That was a challenge. I wasn’t sure how I was going to come in and out of that, being a mother.Bev is a complex character. She’s tough, she’s an addict, she’s unpredictable, she has anger issues. What was most important for you to get right about her?
AA: Her desire to be better. Whatever kept her from being different, that’s what’s underneath and that’s what drives her. I just wanted to be able to communicate that for whatever her challenges and her flaws are, her intent is to be better, to do better. That’s authentic. I think we as mothers all know that: To differing degrees, we fail our children at times, and it isn’t through intent at all. I always felt that Bev really did want the best for her kids.
“

The love of complicated families, with family members who have differing experiences, carries you through different times in your life.

Ron Howard has done so much over the course of his career — as a director and a producer and a mentor. What was your experience working with him?
AA: There’s Ron Howard the person and then there’s Ron Howard the director. He’s so gracious. All day long he’s constantly thanking people, whether it’s craft services or the extras coordinator, the casting assistants, the P.A.s, myself. He’s constantly thanking people for showing up and being committed. He really pays attention to the experience that people are having on set. That is a beautiful thing. But as a director, he is challenging in the best way. He wants to find the layers and the depths of the scene, and he likes to stay in it.

Do you respond well to that?
AA: I do love peeling away the layers.What’s your favorite part about a movie like this, where you know that you’re going to dark places and it’s going to be a physical, aggressive performance?
AA: I think it’s the scenes when we’re all together. We got to start the film out in the holler, and we filmed in a small town north of Atlanta. We all stayed in a bed-and-breakfast. We’d wake up and go to set and see each other all day long, and then come home and eat dinner together and sit out on the porch and either play games or tell stories or sing songs. It was this amazing experience we all got to have for about a week. Sometimes casts get that kismet. It had a very familial feel.What did you take away from this film?
AA: The resilience of family being together. I come from a big family, and it hasn’t always been 1960s-sitcom perfect. The love of complicated families, with family members who have differing experiences, carries you through different times in your life. There are a lot of lessons I’ve learned: How much I lean on my family to help me understand who I am, where I come from, and how that informs how I move forward. 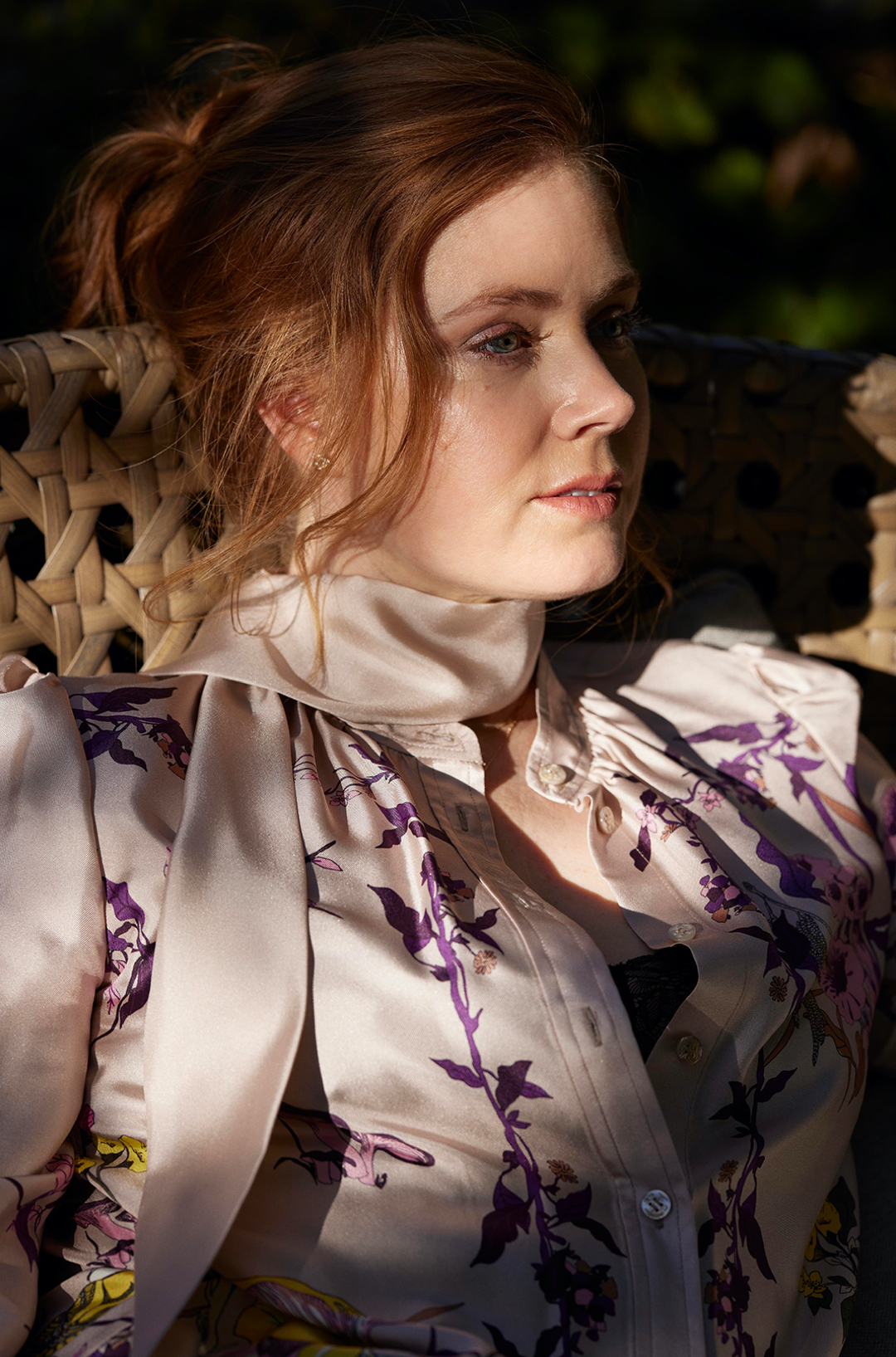 You’re the middle child of seven. When you grow up with that many siblings, how do you find yourself and what you want to do?
AA: We did a lot of activities, but it was sort of like majority rules. If three of the kids were good at track, we were all doing track. I’m just not competitive in that result-oriented way. I’m competitive with myself, but I don’t feel like winning is winning. That didn’t fit in very well in my family.

I was always impressed with people who beat me at track: I ran really hard, so if you beat me, you must have really been fast. I feel like that as an actress: If somebody does something cool, I’m not jealous, I just want to watch it over and over again. How the hell did they do that? I love seeing good performances.You had a lot of frustrations as an actor early in your career. After high school, you were a dancer. Obviously, you could sing. You were going to move to L.A. You were going to make it. And it was really a slog. Do you feel like that struggle better prepared you for seemingly being shot out of a canon?
AA: I think I understood who I was as a human being better, and I understood who I wanted to be as an artist better. When Catch Me If You Can happened, it didn’t register as real, almost. I didn’t know how to process it. I never thought that I would get a job in a Steven Spielberg movie. That was not going to happen to me. I thought, If I’m a working actress, great. I still feel like that.After Catch Me If You Can came Junebug, and you were nominated for an Oscar. Do you remember that moment?
AA: I do, very vividly. I was like: This is it. This is my big moment. I have to remember every detail of going to the Oscars. I never had a thought about winning or not winning. I just wanted to be there and experience it and be present. I was blown away to be there.It feels like yesterday. Since that moment, you’ve been in so many different genres of films: You’ve played Lois Lane and Amelia Earhart. You’ve been in comedies like Charlie Wilson’s War. And then Doubt and Arrival — very serious dramas.
AA: Each job I take for a different reason at a different time, whether it’s the director or the script . . . I look forward to returning to some family films. I miss that. I feel like I’ve dug deep into these more complicated, dark characters, and I look forward to exploring some family-friendly fare. There was never a plan per se, but there was always a reason.
“

I’ve learned along the way to embrace being someone who likes to read a book by a tree.

Do you ever second-guess your choices?
AA: No, actually. With the films that have “performed well” — either critically or commercially — and with the films that didn’t, they’ve all provided something to my life. There’s something that I learned by doing them. I don’t have a single film where I’ve gone, I shouldn’t have done that. Nor is there a part that I passed on, that I watched someone else achieve great success with, where I thought I should’ve done it. I feel like we’re all on our own path.

You’ve done something that is pretty rare in Hollywood: You have maintained your privacy despite being in the limelight for the past 15 years.
AA: I think I’m just boring. Also, I feel like coming from a big family and having my husband and my daughter, I’m always sensitive to the life that they chose versus the life that I chose. Knowing that I’m one of seven children and knowing that I’m the mother of a child and the wife of my husband, I just value the intimacy of those relationships so deeply that I’ve worked to keep them very close to me.People who seek attention, I don’t know that it’s necessarily attention-seeking. I think it’s organic to who they are. I’ll tell you what, there are definitely personalities in my family you cannot take your eyes off of. I grew up with amazingly intelligent and magnetic personalities around me, people who can command a room. And I am not one of them, you know? I’ve learned along the way to embrace being someone who likes to read a book by a tree.You recently formed your own production company, Bond Group Entertainment. How does it feel to be boss lady, and develop material, and be on the other side of the camera?
AA: I started producing with Sharp Objects, and that was the impetus behind starting Bond Group. It’s really wonderful to get to see something be creatively born in that way, and to be a part of storytelling from the inception. I like the idea of creating opportunities for people. 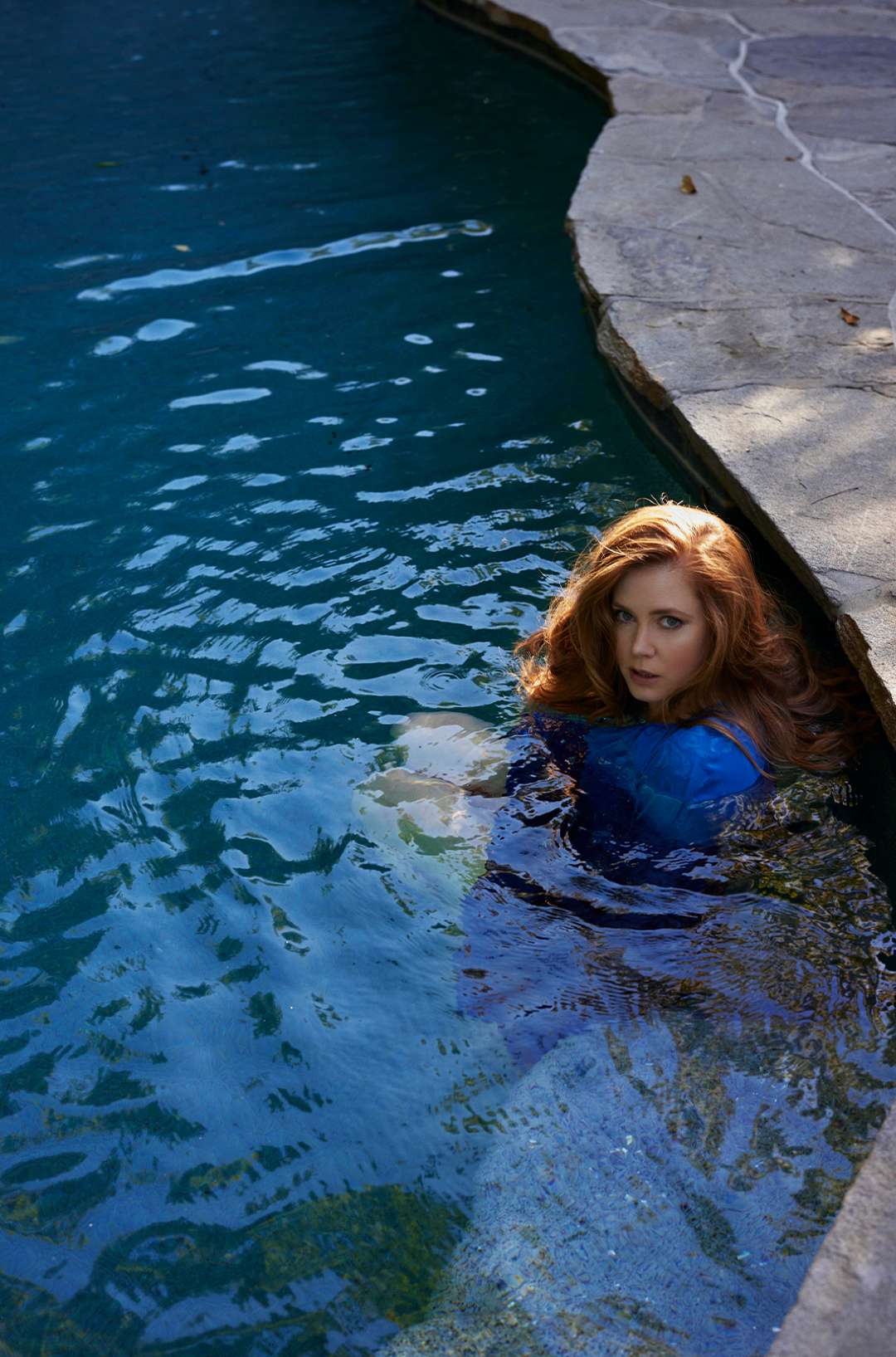 Listen to Amy Adams
on More Like This: A Queue Podcast now.