The Rest Is History

Writer-director Aaron Sorkin and editor Alan Baumgarten take the past as precedent in The Trial of the Chicago 7.

Aaron Sorkin’s The Trial of the Chicago 7 was years in the making. You might say decades. In 1968, antiwar demonstrations erupted into violent clashes with authorities during the Democratic National Convention in Chicago. Seven protest organizers and Black Panther co-founder Bobby Seale were brought before a federal judge to answer for the events. It’s that striking moment in American history that Sorkin brings to the screen with his latest film. He tells Queue how he got there.

Aaron Sorkin: On a Saturday morning in 2006, I was asked to go to Steven Spielberg’s house, which is unusual. Steven and I don’t hang out together. He told me that he wanted to make a movie about the terrible riots in Chicago in 1968 and the crazy conspiracy trial that followed. I said, “Sure, I’m in. I want to write that movie.” As soon as I left his house, I called my father and asked him what riots happened in Chicago in 1968 and what the crazy conspiracy trial that followed was. I’d never heard of any of it. I was just saying yes to Steven, and I heard the word “trial” in there and I liked that.

I wrote the first draft of the film, turned it in, and the next day the Writers Guild went on strike. When we all came back, there were other commitments that we had, and that’s when the can started getting kicked down the road. Eventually, I directed my first movie, Molly’s Game. Steven was sufficiently pleased with that that he thought I should direct Chicago 7 and that the time to make it was now. We couldn’t have foreseen that there would be clashes on the streets between protesters and police months before the movie was released. We couldn’t have foreseen the intramural struggle on the left that’s also dramatized in the film. The parallels are just uncanny. I thought the film was relevant when we were making it; we didn’t need it to get more relevant. 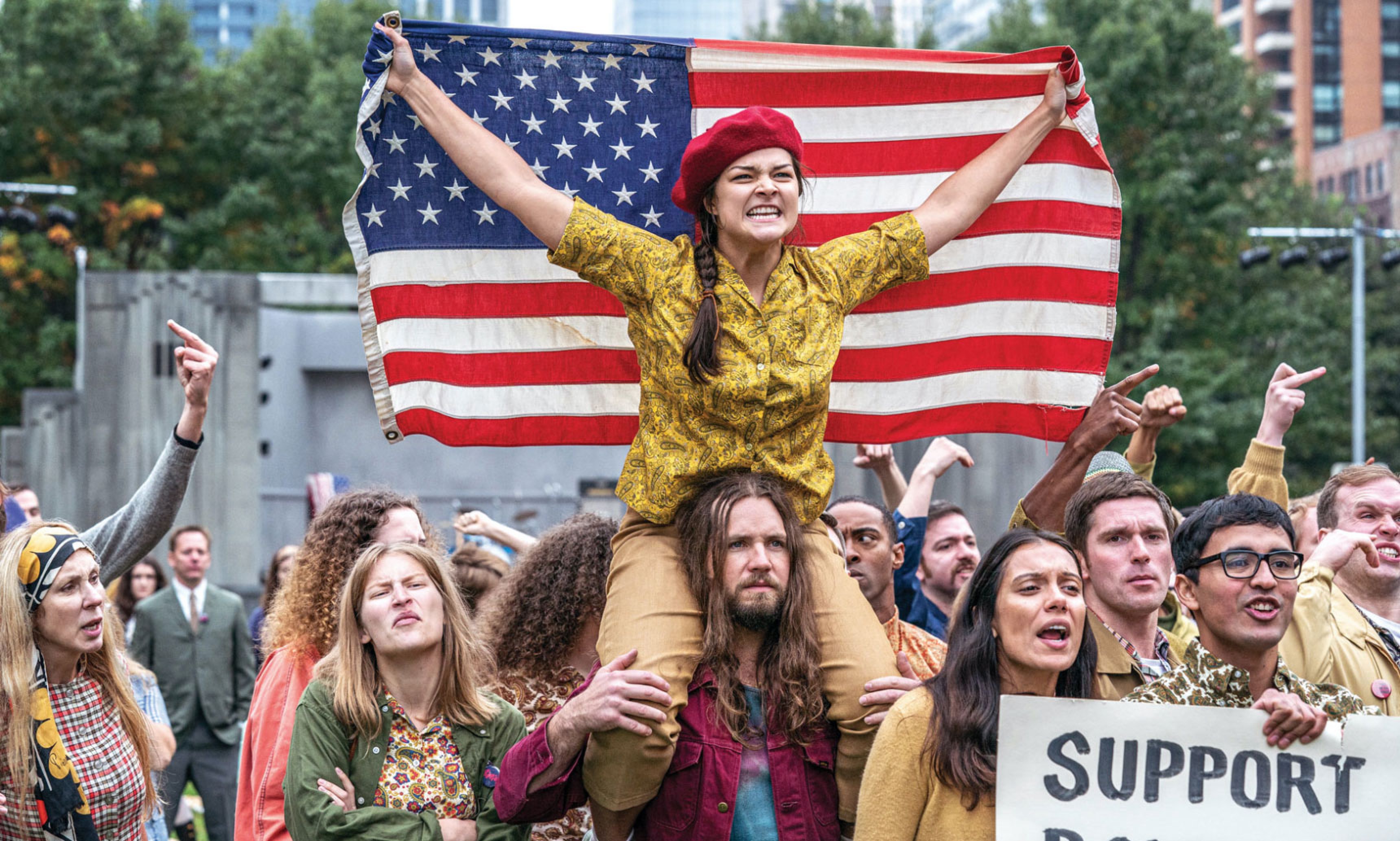 Actors recreate the 1968 demonstrations at the Democratic National Convention

I like to parachute the audience into something that’s already moving a hundred miles an hour. It makes you sit forward a little bit. Your mind is put to work right away. That’s what we do in Chicago 7. It starts with a prologue that introduces our principal characters pretty quickly but also shows a country coming off the rails. What I felt like I had to do was let a contemporary audience know what this country was like right at that moment in 1968, so that we could feel the pot boiling, the temperature going up on both sides — on the side of the young protesters and on the side of the people who were terrified of these protesters. There’s the clip of Walter Cronkite saying: “A Democratic Convention is about to begin in a police state.” I knew if I could take us right to that point, that would be a good way to airdrop the audience in.

I had organized the film into three stories that we were going to tell at once. One was the courtroom drama. The other was the evolution of the riot — how did something that was supposed to be a peaceful protest go from that to being a bloody, violent clash with the police and the National Guard? A third story was the more personal story between protest organizers Abbie Hoffman (Sacha Baron Cohen) and Tom Hayden (Eddie Redmayne). These two guys, they’re on the same side, but they can’t stand each other. They’re each convinced that the other is hurting the cause, but by the end, they come to respect each other. 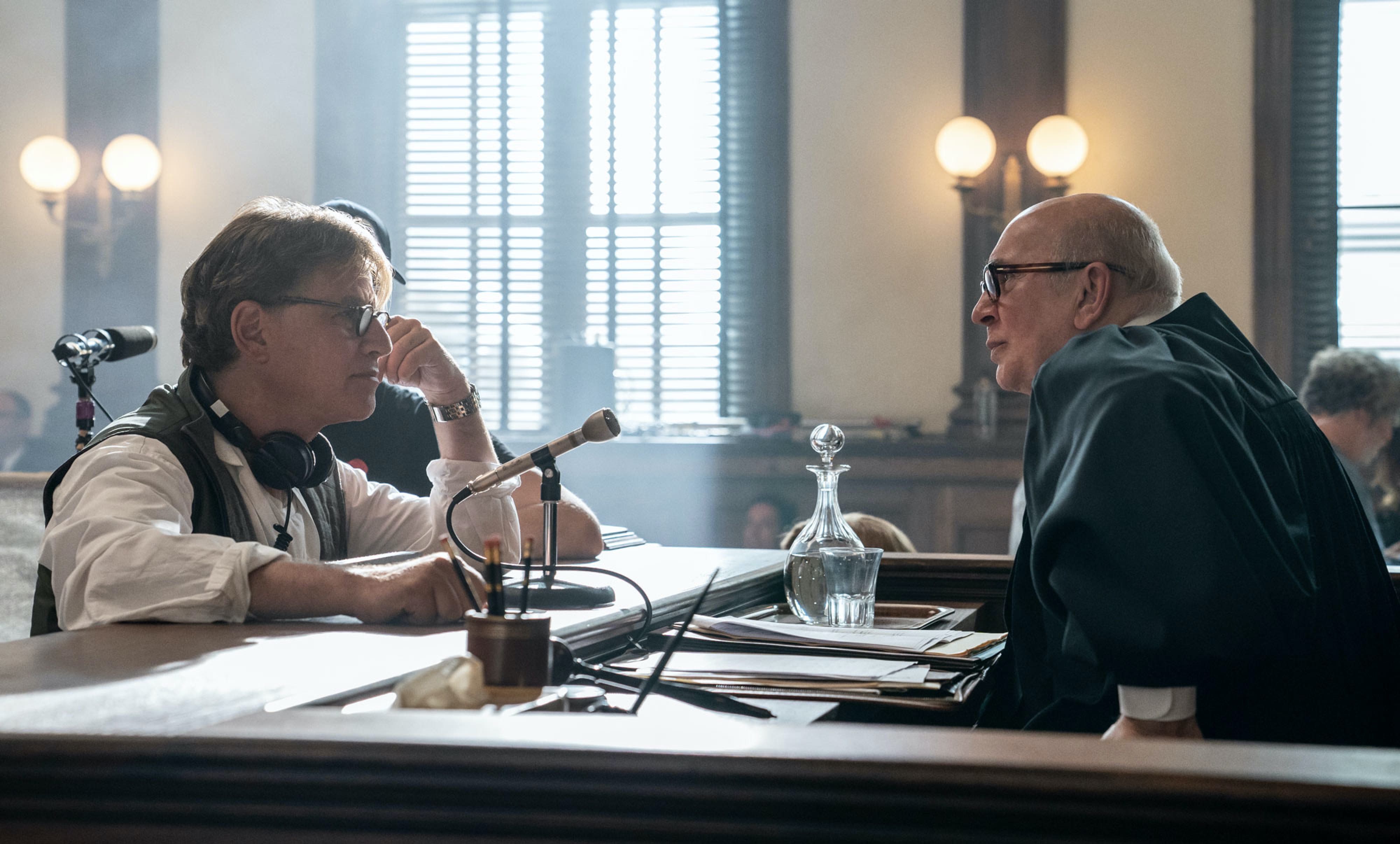 Aaron Sorkin and Frank Langella behind the scenes

Coming to work every morning, I felt like I was being tossed the keys to a Formula One race car. If I could just make sure I didn’t drive the car into the wall, these guys, these actors, were going to win the race. I let them know that I wasn’t looking for a physical or vocal impersonation of anybody. In no cases were we going to use prosthetics or any physical alteration. I just told them to play the characters in the script.

It was interesting, in between scenes — during times when actors would normally be socializing — the cast would segregate themselves to stay in the places they wanted to be in for the day’s work. Frank Langella, who plays Judge Julius Hoffman, didn’t want to socialize with any of the actors playing the defendants. When everyone was called to set, he’d come in the backdoor so he didn’t have to see them until he walked into the courtroom. He wanted these guys afraid of him. By the same token, Yahya Abdul-Mateen II would separate himself a little bit from the group because Bobby Seale didn’t hang out with these guys. Bobby didn’t get to go and have sandwiches in the defense conference room and make jokes with everybody else. At night, Bobby went into a jail cell.
“

The whole world was watching. I wanted it to feel like the weight of the federal government was coming down on these people.

Now, all these things happened, I didn’t make anything up in this movie. But people don’t speak in dialogue, and people’s lives don’t unfold in scenes that form a narrative arc. Those are the things that writers do. The trial itself lasted five months. The actual courtroom where the trial took place was much smaller. Actual trials aren’t as entertaining as movie trials. What was important to me was the larger truth. The whole world was watching. I wanted it to feel like the weight of the federal government was coming down on these people. 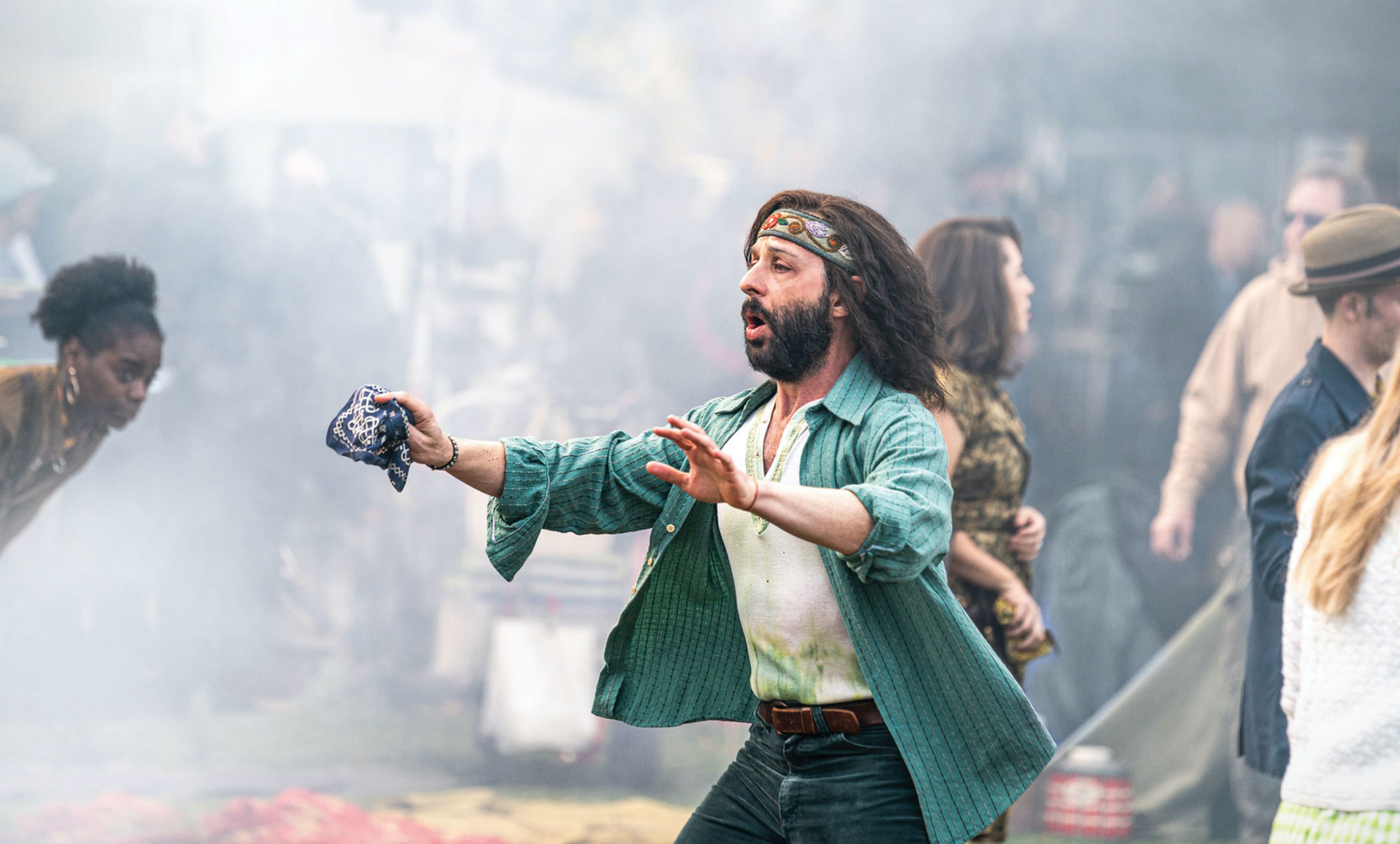 Bringing the 1968 demonstrations to the screen

Sorkin loves a courtroom. Recreating the chaotic demonstrations on the streets of Chicago was a challenge of a different order. Here, he and editor Alan Baumgarten, who also worked with Sorkin on Molly’s Game, share what it was like to assemble those remarkable sequences for The Trial of the Chicago 7.

Aaron Sorkin: The problem was, how do you shoot the riots? How do you create those riots, at that kind of scale, on the kind of budget that we had to make this movie? What I decided to do was to use a mixture of real footage and new footage that we would shoot. I got a couple of wide shots, but mostly I got very tight shots — of a club hitting a skull, of someone getting punched in the stomach, of a tear-gas canister getting fired. Then we combined that with the stock footage. We were lucky in that we shot those riot scenes in Grant Park, where the actual riots took place. What we shot was going to match the file footage. It was a matter of getting creative with how we used our footage, how we mixed it with the existing footage.Alan Baumgarten: Archival footage was part of the opening in the script, but that was the only place that archival footage was specifically indicated. Partway through the edit, Aaron decided we should explore putting some archival footage into the riots as well. We had anticipated this might be the case, because on Molly’s Game, we used a fair amount of stock footage. Aaron’s very open to that if it’s appropriate. One day he said, “Let’s give it a go.”
“

We talked about the parallels of what’s happening on the streets today: the riots, the tear gas, unrest. That is all reflected in what we see in the film.

AS: We don’t actually see the riots until we’re almost an hour into the film. I would refer to the riots as the shark in Jaws, which we also don’t see until the end of the second act.

AB: We had a bunch of material from the events of that time that we’d been looking at for reference, and we decided to use a little bit of it during the first riot. We made it black and white so it would feel separate. It was almost like a touchstone or a brushstroke to augment the material that we had, which was already very powerful. There was just something about going one step further and in quick flashes showing little bits of the actual footage. It wasn’t subliminal, but we used it sparingly, a little bit here and there. 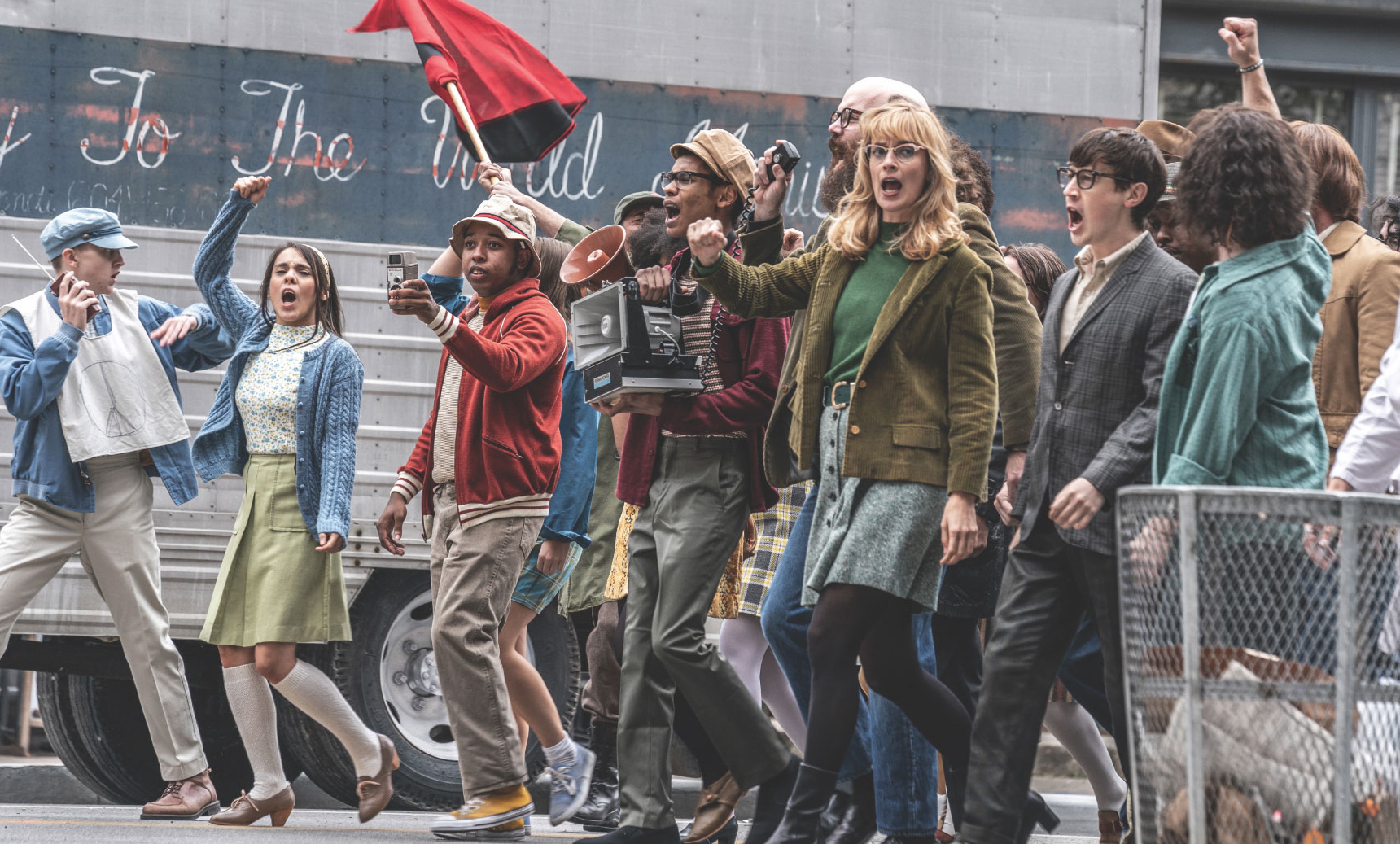 The cast recreates the 1968 demonstrations

After the opening, we first used archival footage during the march on the police headquarters. We found some footage of the crowd crossing the street at the park and joining the larger body of people moving forward that matched exactly to what had been staged. There was quite a seamless transition there from our actual footage to three black-and-white shots of the real gathering. It tied it together very quickly without saying much. We never wanted to feel like we needed to use the footage. We felt it was just an addition that enhanced things.

The beginning of the post-riot sequence, when the wounded protestors are milling about and there’s a dialogue scene between Tom and Abbie, starts with some shots from Medium Cool, the Haskell Wexler film. Those shots we kept in color. They do have a bit more grain, but it’s not all that noticeable, and they’re pretty seamless. They look just like the footage that we shot. 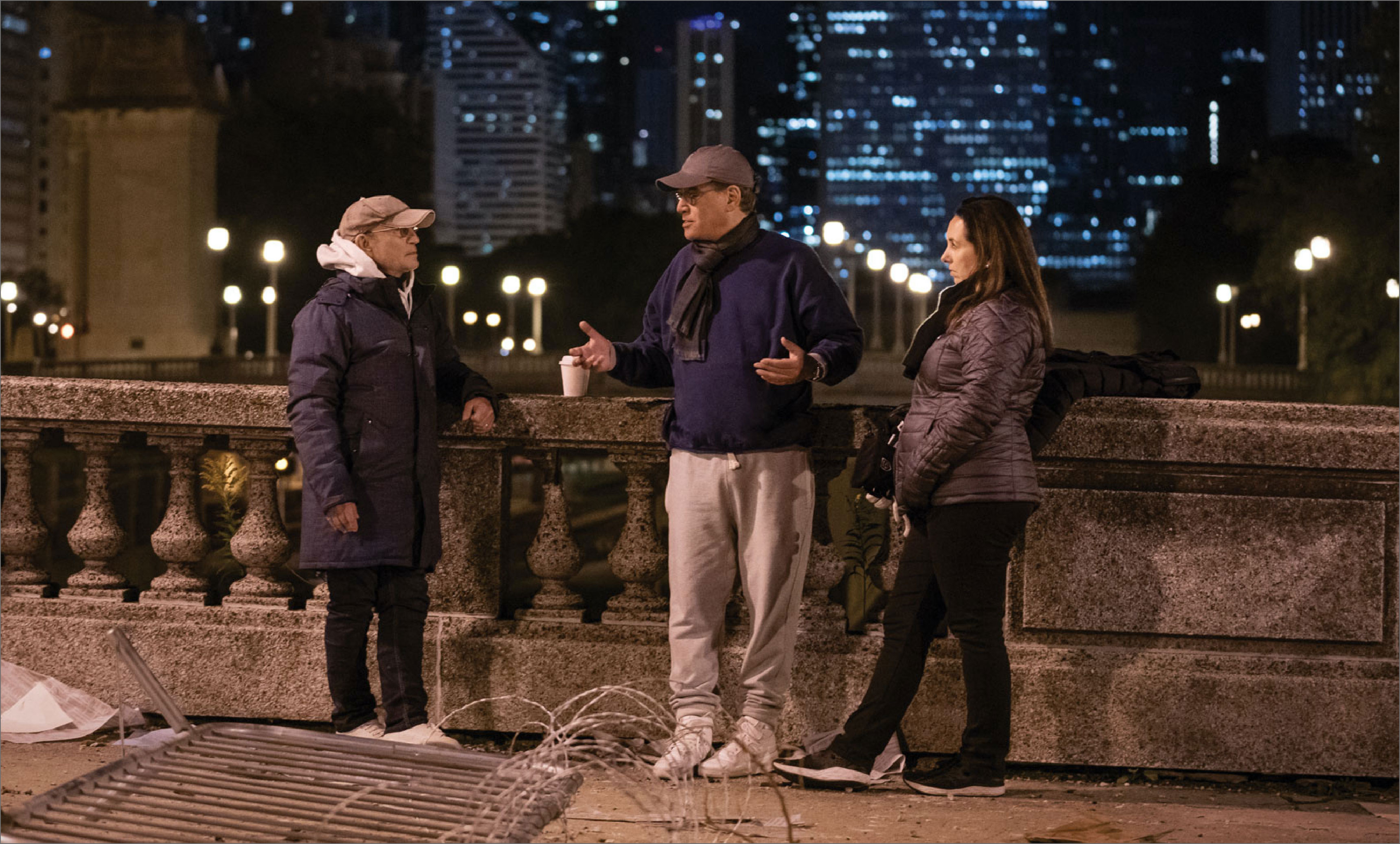 Aaron Sorkin converses with his crew during a night shoot

We also went so far as to use some of the behind-the-scenes footage that was shot during production. I was excited to get this footage that showed the police in formation, waiting. It was very effective in helping us build a more dynamic setup for when the riot actually started. We wove in bits and pieces of all kinds of footage, really. We used it carefully and judiciously, and balanced it out.

The second riot at night culminates with our defendants getting pushed through the window of the Haymarket Tavern. As they’re being handcuffed and arrested, we cut to Abbie on the stand in a very powerful scene where he has some incredible lines. We talked about the parallels of what’s happening on the streets today: the riots, the tear gas, unrest. That is all reflected in what we see in the film.AS: There was a lot to be afraid of here. Molly’s Game had 11 people in it. Chicago 7 has riots and tear gas. We choreographed those riots with the help of stunt coordinators, with the help of expert consultants and police officers who were there. It was daunting for me. Both as a writer and now as a director, I’m much more comfortable in the courtroom. It all worked out, but listen, I didn’t stop being nervous until picture locked.

Watch The Trial of the Chicago 7
on Netflix now.

Listen to The Official Trial of the Chicago 7 Podcast now.