. . . and other things one avid fan learned from Aaron Paul, star of El Camino: A Breaking Bad Movie.

*This piece originally ran in Issue 2 of Queue, published November 2019.

I’ve been engrossed by Aaron Paul’s iconic portrayal of the meth-dealing, “bitch”-shouting bad boy Jesse Pinkman since I watched him tumble half-naked from a roof in the very first episode of Breaking Bad. It’s been six years since the series drew to a close, and Jesse Pinkman is finally back. In El Camino: A Breaking Bad Movie, writer-director Vince Gilligan revisits the world of his multi-award-winning series to create a thrilling, thoughtful tale of survival and redemption.

The film serves as a kind of introspective epilogue to the show — one punctuated by moments of explosive drama — that answers unresolved questions about the young partner of late drug kingpin Walter White (Bryan Cranston). As it happens, circumstances haven’t been kind to Jesse. In desperation, he turns to some old friends for support. Through his own resourcefulness and sheer force of will, he eventually gathers enough cash to pursue a new life on the Alaskan frontier. A dream of mine came true when I was asked to conduct a phone interview with Paul. The three-time Emmy Award winner is one of my longtime heroes. When he greeted me with a friendly “Alexander!” I briefly forgot that this was, in fact, my name. Alexander Welsh: Hello?
Aaron Paul: Alexander! Hey! How’s it going?
AP: Good, my friend. How are you?I’m great, thank you. I loved the chance to return to the Breaking Bad universe. What was it like for you to read Jesse on the page again?
AP: You know what? The only thing I can relate it to is every fan out there watching El Camino for the first time. It was like that, but on steroids for me. From day one, Vince Gilligan prepared me by saying, “I want to gauge your interest in playing Jesse again. I haven’t written the script yet, but if you’re interested, I want to dive into it and only do it if it’s perfect.” So I knew it was going to be beautiful because Vince is the last person to want to mess with the Breaking Bad legacy. 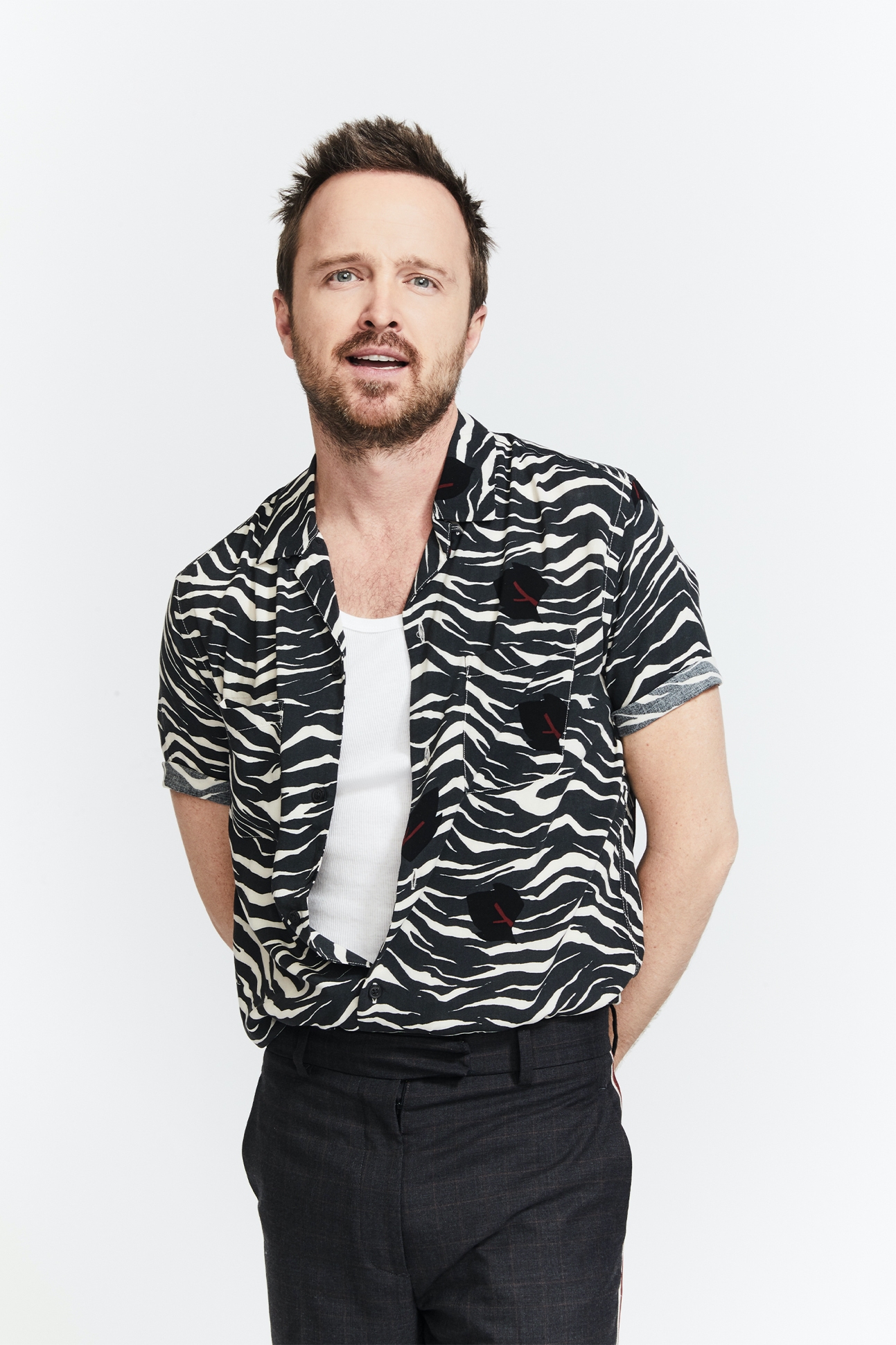 Were you always waiting for a call from Vince?
AP: No. No, not at all. I said goodbye to this character six years ago, you know?

Yes, of course.
AP: I’m a big fan of [Gilligan’s Breaking Bad prequel series] Better Call Saul, and the more seasons that passed on that show, I just realized there’s no way that Pinkman could ever show up. If he did show up, there’d be a very specific reason behind that. And if anyone’s going to come up with that, that would be Vince and the rest of the writers. So yes, it was a shocking call for me. After the script was finished, Vince invited me over to his office to read it, and I just laid on the couch, kicked off my shoes, and took my time with it. It was just such a beautiful, beautiful ride.Did you have to binge-watch the entirety of Breaking Bad again? Or does Jesse Pinkman always live with you?
AP: I think there was only one episode that I had to re-watch. It was the episode that tied in with the very first scene of the movie. It’s an episode called “Buyout,” and it’s Jesse just wanting out of the meth business. I wanted to be reminded of what happened. It was like, This is awful, I’ve got to get out of here. It’s so interesting when you’re reading a script for a character that you know so well. I lived and breathed every moment of this guy’s life that we saw onscreen. The first time I read the script for El Camino, I felt every emotion, I knew every emotional beat. So I was ready for it, you know?Definitely. El Camino kicks off almost immediately after the last scene in Breaking Bad. The last time we see Jesse, he’s been tortured both mentally and physically. Did you need any special preparation to get back inside that mindset?
AP: I just waited until the cameras were rolling, and it’s exactly what I did when we saw the final scene in Jesse’s journey in Breaking Bad. I didn’t know how I was going to play that. I knew where he was at emotionally, and I knew this was his escape, and then the cameras were rolling and it started to evolve into what we saw. We did two takes on that, and that was it.Was it daunting to revive one of the most celebrated characters in TV history? Or was it invigorating?
AP: It was incredibly thrilling. I feel so blessed to have been a part of Breaking Bad and to be the guy chosen to play Pinkman. It’s a rich and beautiful character that I love so much, so it was nothing but thrilling for me.
“

There’s a lot of blood on his hands.

Do you feel that the film represents a rebirth of sorts for Jesse?
AP: Maybe so. Because the very final frame of the film is him driving away. Such an opposite end of the spectrum to when he drove away in the final frame of his journey in Breaking Bad. He’s finally found some sort of inner peace, but I think there’s a bumpy road ahead for him. I mean, he was responsible for murders, and he was a part of the biggest meth operation in history.

That’s quite a résumé.
AP: There’s a lot of blood on his hands. 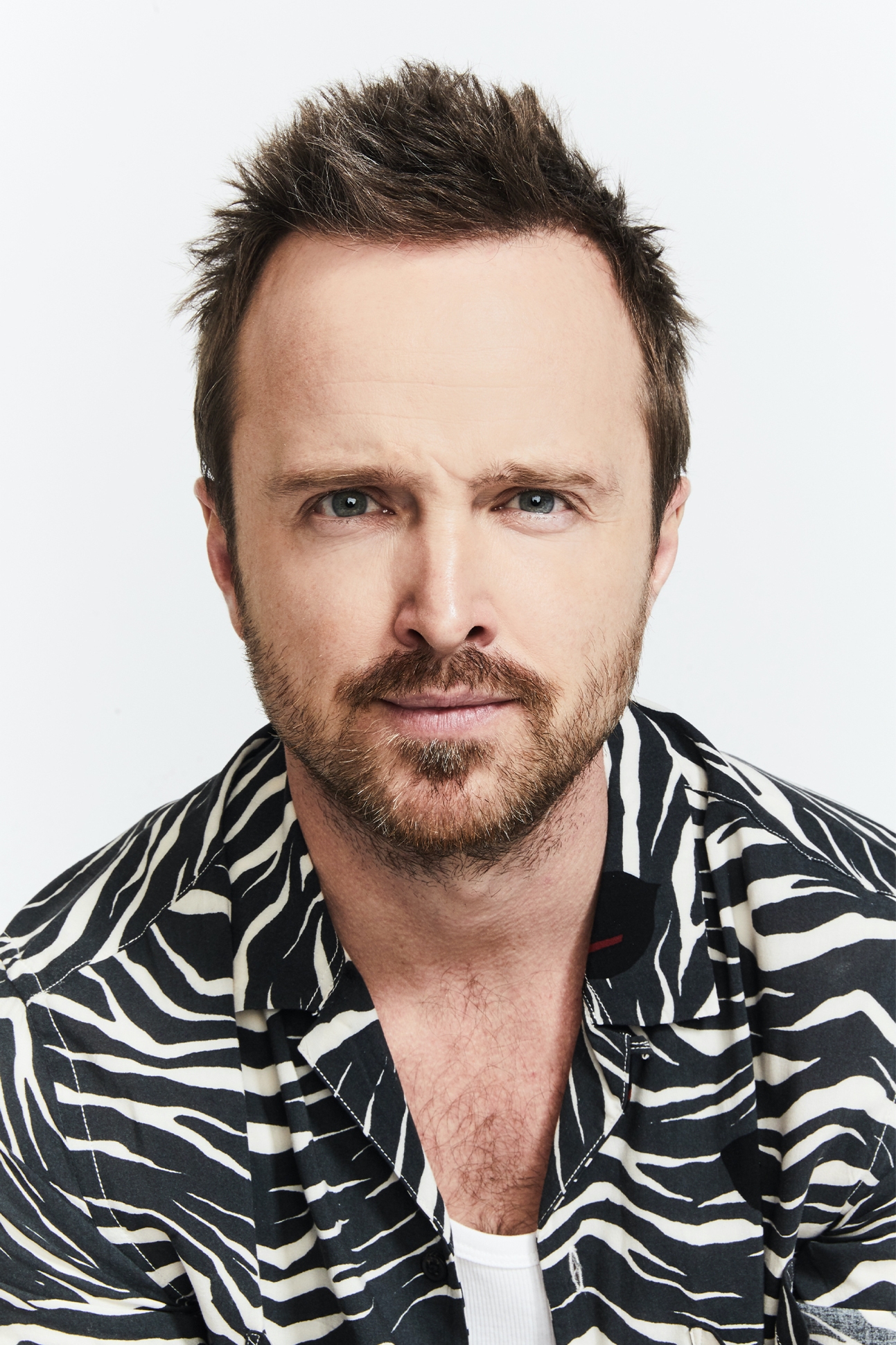 I noticed a few Easter eggs relating to Breaking Bad. Do you have a personal favorite?
AP: Oh, man. I mean, I love the obsession that Todd [Jesse Plemons] has with Lydia [Laura Fraser]. I don’t know if you noticed, but one of those snow globes in Todd’s room contained little floating hearts with Todd and Lydia inside it. That was a great little tip of the hat.

Bryan Cranston reprises his role as Walter White for a key flashback scene in El Camino. Do you think Jesse’s story would have ended differently had Walter still been alive?
AP: One thing that Bryan Cranston said going into El Camino was, “Look, I’ll do it, but please promise me that Walter White is still dead.” There was a small sliver of people that thought he might still be alive, but I think those people didn’t understand the poetry of it all. It was so beautiful that we see Walter White say goodbye in the meth lab that he created — that destroyed his life and so many lives around him. With the choice of song playing over the scene, it was perfect. The film ends with Jesse beginning a new life thanks to the fixer Ed, played by Robert Forster. Do you think that Jesse finally gets what he wants — to be free and to survive?
AP: I think so. I think as he gets out of the moving truck and breathes the Alaskan air, he has a new identity. He sees some sort of hope ahead of him, and he hasn’t seen that in a very long time. It was so nice to see this next chapter in Pinkman’s life, and I’m so happy that he is finally heading off to some sort of freedom. What have you learned about yourself from playing Jesse for all these years?
AP: I learned I’m so happy that I’ve never done meth. I know so much about meth just from doing this show, and I don’t see the excitement of that drug — and it’s such a problem all over the world. I don’t get it. I really don’t. So yes, I learned that I’m a blessed man. I’m madly in love, I have a baby, and I’m doing what I love most.